Literally the Fed committed $$7.77 Trillion to bailing out these banks. This dwarfs the $700 billion TARP bail out. Bloomberg:

Saved by the bailout, bankers lobbied against government regulations, a job made easier by the Fed, which never disclosed the details of the rescue to lawmakers even as Congress doled out more money and debated new rules aimed at preventing the next collapse.

A fresh narrative of the financial crisis of 2007 to 2009 emerges from 29,000 pages of Fed documents obtained under the Freedom of Information Act and central bank records of more than 21,000 transactions. While Fed officials say that almost all of the loans were repaid and there have been no losses, details suggest taxpayers paid a price beyond dollars as the secret funding helped preserve a broken status quo and enabled the biggest banks to grow even bigger.

Citigroup was the highest beneficiary, making $1.8 billion in profits from Federal Reserve loans, yet lost -$29.3 billion. Bloomberg has made an interactive chart on each individual bank's profits from loans along with their losses, available here.

Literally the too big to fail banks got bigger from the bail outs.

The Bloomberg story went viral almost immediately. Below is a round up of what others are saying after reading the story.

Felix Simon graphed up just one example of Morgan Stanley's evaluation and loan amounts in a long article that adds to the Bloomberg piece. 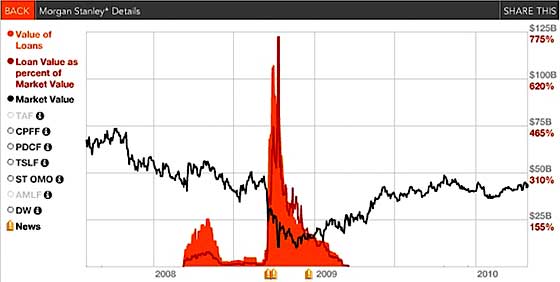 Ladies and Gentlemen, this is what a lender of last resort looks like. What you’re looking at here are three lines. The black line is Morgan Stanley’s market capitalization, which tends to hover in the $40 billion range but which fell as low as $9.8 billion in November 2008. The orange line is the amount that Morgan Stanley owed to the Federal Reserve on any given day — an amount which peaked at $107 billion on September 29, 2008. And the red line is the ratio between the two: Morgan Stanley’s debt to the Federal Reserve, expressed as a percentage of its market value. That ratio, it turns out, peaked at some point in October, at somewhere north of 750%.


The bottom line is everybody close to the process lied like crazy.

FireDog Lake also amplified the great lie and the use of TARP as a diversion:

The thrust of the story is that information about the massive size and scope of these efforts was deliberately concealed from Congress and the American people during a critical period.


The highest form of crony capitalism writ large and explained in its clearest and most egregious manner yet.

The Huffington Post didn't even comment. They just linked to Bloomberg under the title, The Secret Life of Banks, nuf said.

Hats off to Bob Ivry, Bradley Keoun and Phil Kuntz for digging through 29,000 pages of FOIA data they finally received.

Bloomberg's original research bombshell was the $1.2 trillion in Federal Reserve secret loans to the banks. That was an atom bomb, this one is nuclear.

A recent study by the Government Accountability Office shows that directorships at Federal Reserve Bank Districts are disproportionately held by bankers in contravention of the Fed's own policies which state that directors are to be selected from a wide range of industries as shown here:

With half of the FRB directors having experience at the helm of commercial banks, perhaps their allegiances are more closely aligned with their employers than with those who live on Main Street.

If you register at EP, you can use the RT formatter to put up real live links -- a convenience to others.

There's a lot of good stuff on Viable Opposition, and this blog in particular took the author some time and effort to compile. We don't often think about the secondary  level of the Fed (the 12 District Banks), and we should give that more attention. Most people don't even give any attention to the composition of the Federal Open Market Committee (FOMC).

For my 2¢, it wouldn't necessarily matter if the appointees were all old white males, or none old white males. I think it's nonsense to suppose that getting rid of old white males represents, in and of itself, any kind of progress. On the other hand, the prevalence of women among the most effective regulators, top advising economists and Fed board members ... is striking and undeniable.

BTW: there's a great blog currently at the Viable Opposition front page on USA's sovereign debt situation, 'United States Debt Interest Scenarios - Have We Reached the Point of No Return?'

You are correct, we are past the point of no return, but not mathematically...only politically. If our politicians had the gumption to end The Afgan war and downsize the military, legalize and tax drugs and prostitution, institute a VAT and a sur charge on very high incomes, and reform entitlements, this mess could be corrected...but you are right, it won't happen.

IMO, solutions may or may not happen. As Winston Churchill said --

"You can always count on Americans to do the right thing - after they've tried everything else." -- Winston Churchill

Being that the Fed was created by some of the
lowest of the low back in 1913 (Aldrich & friends)
and is not accountable to anyone and the fruit
of their operation is 100 years of the steady
demise of our dollars value. Is it any wonder
that we the gullible deserve anything less than
total ruin when we willingly tolerate such
thievery for so long? My research into the history
of the Fed is making me ill. Please join me.

Is the Federal Reserve System a Governmental or a Privately controlled organization?

.... everybody is forgetting here that the real problem is the Social Security trust fund, which will go broke in another half-century.

This is interesting, the day this story breaks, Barney Frank, who was head of the financial services committee at that time, is retiring.

Frank was the least of the worst though in terms of chairs on that committee, that said, that's not a badge of honor.

I worked in government finance for awhile. I went into the field brimming with optimistic naivete (this was my first job, after all), but quickly learned that "underwriting" at a certain level means being bullied by high-ranking elected officials into either presenting unethical/financially treacherous "pet" deals or losing your job. I wish more people understood how common this experience is throughout all tiers of government - and that it gets worse the higher up you go, because what's a billion bucks to the Federal government?

The Federal Reserve is claiming they did not provide a "subsidy" where banks made $13 billion in profits from Fed loans and claims there was a penalty. The letter is here.

The Fed also argues Bloomberg "double counted" on loans oustanding and the actual amount was only a mere $1.5 trillion instead of $7.7 trillion.

Poof, bottom line people are still very pissed the banks were not allowed to plain fail, the derivatives cleaned up.

I don't see how the Fed can claim Bloomberg's story is "wildly inaccurate", it was well documented the big banks were making money, as I recall, via the carry trade in part, via the 2008 "emergency" loans.

Felix Simon's graphs are clearly "loans outstanding at any moment in time", that's not a double counting of loans.

Truth of fiction TBD for it involves cranking through 29,000 pages of transactions, which I originally assumed Bloomberg did accurately.

Keywords "secret" versus "not disclosed" oh come on, nit pickin'.

Oh, are we getting into a war of how to tabulate. Fun fun.

Bloomberg article here. They basically went through Bernanke's letter on a point by point basis and said they made no mistake.