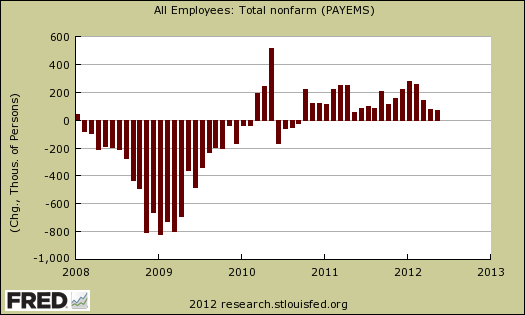 May shows only 82,000 private sector jobs gained while government payrolls shrank another -13,000. In addition, 9,200 of those jobs were temporary.

America has one hell of a jobs deficit. The start of the great recession was declared by the NBER to be December 2007. The United States is now down -4.973 million jobs from December 2007, 4 years and 5 months ago. The below graph is a running tally of how many official jobs are permanently lost, from the establishment survey, since the official start of this past recession. Increased population growth, implies the United States needs to create at least 10 million jobs or self-employment, using the population survey statistics. This estimate assume a 62.7% civilian non-institutional population to employment ratio, as it was in December 2007. This implies an additional 5 million jobs were needed over a 53 month time period beyond the ones already lost. This is just taking into account increased population against the payroll jobs gap, the actual number of jobs needed is much higher, in part because payrolls, CES, and population, CPS, are two separate data surveys from the BLS. Another problem with the employment market is the gross number of part-time jobs generally. There is a huge number of people who need full-time jobs with benefits who can't get decent jobs. Those forced in part time jobs increased by 245 thousand. Of the 142.29 million employed as reported from the current population survey, there are still 8.1 million of the 27.5 million part-timers working low hours because they cannot get full time jobs. That's a hell of a lot of people stuck in part-time jobs who need full-time work. U-6 is a broader measure of unemployment and includes the official unemployed, people stuck in part-time jobs and a subgroup not counted in the labor force but are available for work and looked in the last 12 months. Believe this or not, U-6 still leaves out some people wanting a job who are not considered part of the labor force. U-6 jumped up 0.3 percentage points to 14.8%. I remember when new math came along and I tried to help my child do division. I couldn't figure out what he was talking about as the new system was completely different from the old way.

Is this perhaps the same in the jobs market in this era - we are counting in yesterday's job currency?

I lead a small nonprofit organization that has felt the impacts of the recession. In 2008 and 2009 we all cut back our hours and no one had a pay raise until 2010. I didn't get one until this year. However as we come out of the "recession", we have grown as an organization. For the young, they enter via internships: We have hired an Americorps every year since 2007. Last year we offered a part time position to one and this year that position became full time. We'd like to hire two Americorps this year if the program is well funded. (I could probably handle many more - it's a great way for young to get work experience and businesses also benefit. It should be a priority for federal funding). For the mature, we go part time: we have two new positions that are 25% and 50% respectvely. Some of this is indvidual choice - when you are 60, part- time may be your ideal work scenario although you will still be counted as looking for fulltime via the unemployment stats if unemployed.

I look around my community and see this same type of scenario all over. In my husband's business (which works with the tech industry), they have added at least five jobs in their small shop in the last three years. Some are part-time and some are full-time by choice. He is full time but would love to be able to work part-time - but they can't allow that yet as they have too much work.

Life is different - young people enter via internships and mature people wind down with part time work. Yet we still seem to idealize the full-time "living wage" manufacturing job in all things statistics. We're in a brand new world folks

We're sorry but people need income, wealth in order to even retire. Medical costs are through the roof and with Medicare eating up people's retirement. The message of "suck it up" is not acceptable. There is nothing wrong with flexible work as long as it pays full benefits and high wages.

That's not what the large number of part-time really is in these numbers as we see from overall wages being flat or repressed.

Thinking it's perfectly ok for over 50% of wage earners to be below $26k a year is unacceptable, unless of course you enjoy third world poverty.

But at least some people will have multiple billions and multiple mansions in this new world, isn't that great? All they had to do to get them was stop paying their employees a decent wage. I'm surprised they hadn't thought of it previously... oh yeah, the unions in the old days wouldn't have gone along, and they couldn't outsource to China and India in those days.

I wonder if there are some other factors making things look worse than they are:

1) The seasonals may be taking too much off the numbers.

2) The economy may have borrowed growth in the winter, especially in March with the exceptionally warm weather, and now it is giving some of that growth back.

3) Our old friend the birth/death model distorts the numbers needlessly.

Without some of these influences, perhaps the numbers would have come in as expected: 150,000 to 175,000. Wall Street would have been okay, though not necessarily happy.

I have a separate question. We keep reading that businesses are waiting for some magical economic signal before they are ready to hire. I assume that signal would have something to do with a self-sustaining recovery. I can see three impediments to a self-sustaining recovery. First, any extra money consumers get in their pockets seems to go to paying off debt, not helping the economy expand through consumer purchases. Second, local governments are in a position of sustained down-sizing, so no help is going to come from that sector. Third, large corporations might prefer to play the labor arbitrage game rather than hire US workers. All-in-all, we may be waiting for something that just isn't going to show up for years to come.

It's true, the seasonal adjustment algorithm is "blowing up" with these unusual weather patterns and Case-Shiller/S&P plain stopped reporting their housing price data, but that really has more to do with the housing bubble bust being so large it threw off the historical pattern data which the seasonal adjustment predictor uses to smooth out cycles due to the seasons.

Look at GDP, which is also seasonally adjusted, annualized, real valued, but I point to it because the latest is Q1, those unusually warm months. 1.9% isn't enough to generate jobs. Barely treading water.

I think your insights are dead on. Local governments are going to continue their slash and burn, esp. when most often revenues are coming from property taxes. California should be relabeled "little Greece" and they are so beyond dysfunctional, there is no way that government will do the right things to become efficient, corrupt, 1 party rule and their constitution doesn't enable any action on budgets.

The ADP report breaks down private job growth by business size and it's always the same, large businesses barely create any new jobs, it's always the mom and pops and that also usually means low paying jobs.

Right now corporate lobbyists are lining up in Congress and lining politicians' pockets to pass more foreign guest worker Visas. It's just unbelievable when the evidence is so clear these same corporations are not only never training Americans, giving them experience, they are literally displacing Americans by these methods.

Anyway, in terms of GDP and overviewing some of the other indicators as of late, I think we're in a stall and what is coming at us in 2013, well, I think the CBO is right, we're going to go into another recession.

We haven't even hit the infamous time bomb lurking out there in some funky derivatives trade where no reforms were actually done, just make for good copy when one blows up!

I might run some numbers on SA and NSA, birth/death and such and write it up. See if I can dig out the actual mathematics and thus limitations on the SA algorithm.

On your final thoughts, a recovery is not in the foreseeable future. The structural barriers you limited yourself to are formidable. Considering the social and political landscape as well, it's difficult to see anything but a hard lesson coming from Reaganomics.
I am not a "socialist, communist, leftist, Marxist, liberal".