Below is the yearly percent change in the composite-10 and composite-20 Case-Shiller Indices. These are not seasonally adjusted, but comparing from July 2010. As you can see, there is clearly was a new decline going on for 2011, although the last two months, the rate of that early decline has slowed.

The Case-Shiller report even spells out the not-seasonally adjusted data is simply due to it being summer, the housing season.

This is still a seasonal period of stronger demand for houses, so monthly price increases are expected and were seen in 17 of the 20 cities. The exceptions were Las Vegas and Phoenix where prices fell, while Denver was flat. 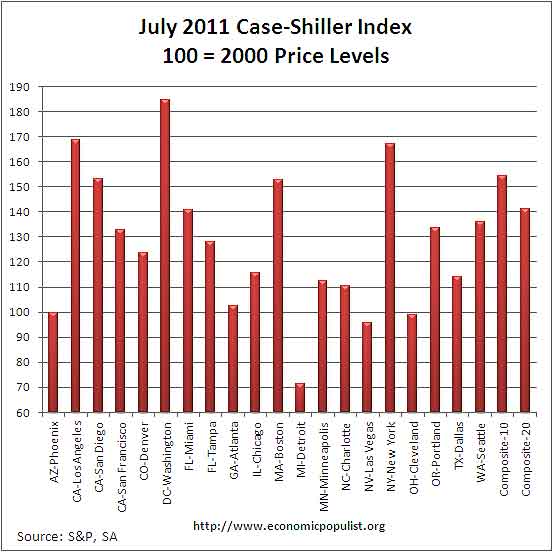 For July 2011, the S&P/Case-Shiller Home Price indexes shows 18 of the 20 cities tracked are down for the year. Detroit, finally increased.

Below are all of the composite-20 index cities yearly price percentage change, using the seasonally adjusted data. 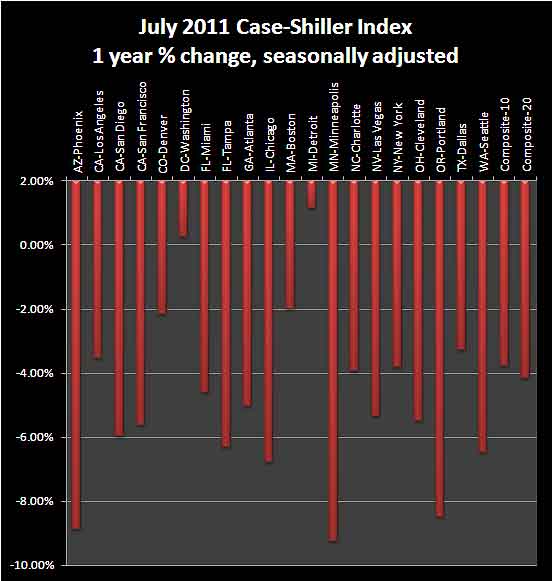 Calculated Risk, has additional custom graphs and data analysis and is the uber site for residential housing, with valid statistical analysis.

US foreclosure filings rose by 7% in August and default notices increased more than 40% in several states, with just five states accounting for more than half of the total.

Default notices on a total of 78,880 properties were filed for the first time in August across the country, a nine-month high and a 33% increase from July, the biggest month-on-month rise since August 2007. However, despite the strong rise on the July figures, default notices were still down 18% from August 2010 and 44% below the monthly peak of 142,064 default notices in April 2009.

There were also 228,098 foreclosure filings − default notices, scheduled auctions and bank repossessions − reported in the month, according to the latest data from RealtyTrac. This equates to one in every 570 US housing units filing for foreclosure that month.

Corelogic reported shadow inventory or houses being kept of the market, shrank to 1.6 million from 1.9 million.

Here is last month's overview of the Case-Shiller report.

BTW: Sooooooo tempting in the first graph shown (top of page) to tweak that last little apparent low so as to go back up and then maybe oscillate around 0% change -- meaning that the long sought 'low' has been established. That would then eliminate that factor of buyers waiting for the low.

But, is that what the graph will look like a year from now (oscillating around 0% change)? -- considering all the foreclosures that are said to be coming soon or already in the works? I don't know. It's possible.