The S&P Case Shiller home price index shows a -4.0% decline from a year ago over 20 metropolitan housing markets and a -3.9% decline for the top 10 housing markets from December 2010. Home prices are back to early 2003 levels and new index lows. S&P itself has woken up and realized home prices have not yet reached a bottom.

Below is the yearly percent change in the composite-10 and composite-20 Case-Shiller Indices. These are not seasonally adjusted, but comparing from December 2010. 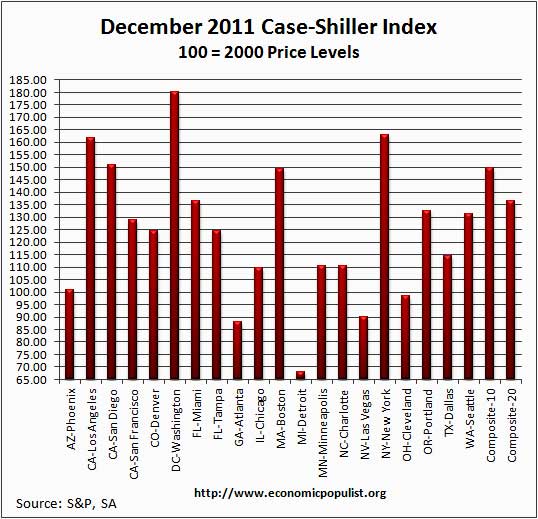 For December 2011, the S&P/Case-Shiller Home Price indexes, seasonally adjusted, shows 19 of the 20 cities tracked are down for the year. Only Detroit, squeaked positive, 0.53%, but bear in mind they have been hammered.

Below are all of the composite-20 index cities yearly price percentage change, using the seasonally adjusted data.

After a prior three years of accelerated decline, the past two years has been a story of a housing market that is bottoming out but has not yet stabilized. Up until today’s report we had believed the crisis lows for the
composites were behind us, with the 10-City Composite originally hitting a low in April 2009 and the 20-City Composite in March 2011. Now it looks like neither was the case, as both hit new record lows in December 2011. The National Composite fell by 3.8% in the fourth quarter alone, and is down 33.8% from its 2nd quarter 2006 peak. It also recorded a new record low.