The Great Wall Street Bail Out, TARP, gets an F for f&@&... something the middle class. Neil Barofsky grades TARP and let's just say it's more than a ruler whack across the knuckles.

The above summary might be harsh, yet the report pretty much concludes the same thing. TARP was clearly a bail out for Wall Street, leaving Main Street in the dust.

It's clear SIGTARP is frustrated with Treasury. Here's an overall blast quote from the report against Tim Geithner:

Treasury refuses for more than a year to require TARP recipients to account for the use of TARP funds, or claims that Capital Purchase Program participants were “healthy, viable” institutions knowing full well that some are not, or when it provides hundreds of billions of dollars in TARP assistance to institutions, and then relies on those same institutions to self-report any violations of their obligations to TARP, it damages the public’s trust to a degree that is difficult to repair. Similarly, when the Government promotes programs without meaningful goals or metrics for success, such as its mortgage modification programs, or when it makes critical and far-reaching decisions without taking an even modestly broad view of their impact, such as pushing for dramatically accelerated car dealership closings without considering the potential for devastating job losses, or when it fails to negotiate robustly on behalf of the taxpayer, as it did when agreeing to compensate American International Group, Inc.’s (“AIG”) counterparties 100 cents on the dollar for securities worth less than half that amount, the Government invites public anger, hostility, and mistrust.

While the press and the administration have declared TARP over, not so fast. The Inspector General tells us reports of the death of bail outs has been premature.

As of October 3, $178.4 billion in TARP funds were still outstanding, and although no new TARP obligations can be made, money already obligated to existing programs may still be expended. Indeed, with more than $80 billion still obligated and available for spending, it is likely that far more TARP funds will be expended after October 3, 2010.

The executive summary lists some damning facts which prove TARP was a Wall Street bail out and the rest of us were hung out to dry.

On AIG, Barofsky really blasts the methodology Treasury used to make AIG look better than it is. Seems we had a strange bait -n- switch on AIG accounting, which magically made $40 billion in losses go away:

Treasury’s most recent estimate of a $5 billion loss on its AIG investment also represents a dramatic shift from the $45 billion loss that Treasury had projected in its AIG investment just six months earlier. While AIG’s fortunes may have indeed improved during the course of those six months, there is a serious question over how much of this decrease comes from a change in Treasury’s methodology for calculating the loss as opposed to AIG’s improved prospects. All of Treasury’s prior loss estimates for AIG under TARP, including the March 31, 2010, estimate of
$45.2 billion, were conducted in accordance with its published “Methodology to calculate Estimated TARP Costs” (“Methodology”), which describes how Treasury values all of its investments, including its preferred shares of stock in AIG. Consistent with that document, Treasury’s previous loss estimate for AIG, as with its estimates of other TARP investments in preferred shares of stock, accounts for a broad range of factors that might affect the value of Treasury’s holdings. The Retrospective, however, abandoned the published Methodology, instead estimating a $5 billion loss based solely on the recent market closing price of AIG’s common stock, on the assumption that the recapitalization plan will go exactly as planned and result in Treasury receiving approximately 1.1 billion common shares of AIG stock in return for its current preferred interests. While Treasury did describe its new methodology in the Retrospective, it did not disclose that this methodology differed from that used previously and from what is set forth in its published Methodology. The Retrospective also failed to disclose that its common-stock-based valuation would not and could not be used in Treasury’s fiscal year 2010. TARP financial statements, which will be published in November and which will continue to use the auditor-approved methodology that has characterized every other Treasury estimate of loss on its AIG investment.

Gets worse. Seems Treasury is doing some funky accounting elsewhere to hide the real AIG losses. If the government is playing these kind of accounting games, how can anyone expect the next Enron or Worldcom not to happen? Of course Financial Armageddon will happen again. Unlike corporate corruption in 2001, or a better example, the 1980's S&L crisis, now no one gets prosecuted. From page 10:

Treasury added a line entitled “Other Treasury AIG Investments,” with a projected profit of $22 billion, which relates to the anticipated sale of the 79.8% equity interest that FRBNY received from AIG in September 2008, weeks before TARP’s passage and more than two months before Treasury bailed out AIG through TARP. Treasury then offsets its estimated “Total TARP Cost” of $51 billion with this number, yielding a “Total Treasury Cost” of $29 billion.

Thinks it's just on AIG, even CNBC saw some accounting funkiness on PPIP evaluations (aka toxic asset sales).

Below is the general TARP overview. Treasury has made some money on TARP as noted by the Inspector General:

TARP consists of 13 implemented programs. As of October 3, 2010, $474.8 billion had been obligated across TARP to provide support for U.S. financial institutions, the automobile industry, the markets in certain types of asset-backed securities (“ABS”), and homeowners. Of this amount, $387.8 billion had already been spent, leaving $82.0 billion in six programs remaining as obligated and available to be spent. As of September 30, 2010, 122 TARP recipients had paid back all or a portion of their principal or repurchased shares for an aggregate total of $204.4 billion of repayments and a $5 billion reduction in exposure to possible future liabilities, leaving $178.4 billion in TARP funds outstanding.

In addition to the principal repayments, Treasury has received interest and dividend payments on its investments, as well as revenue from the sale of its warrants. As of September 30, 2010, the Government had received $21.8 billion in interest, dividends, and other income, and $10.2 billion in sales proceeds had been received from the sale of warrants and preferred stock received as a result of exercised warrants. At the same time, some TARP participants have missed dividend payments: among CPP participants, 137 have missed dividend payments to the Government, although some of them made the payments on a later date. As of September 30, 2010, there was $211.3 million in outstanding unpaid CPP dividends.

Here's another tidbit from the report (page 47) along with a graphic on funds outstanding. 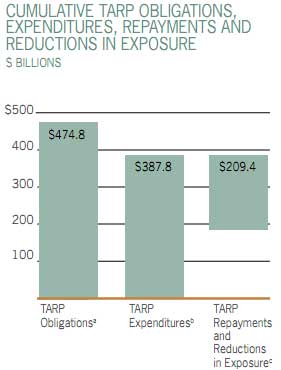 Most of the outstanding TARP money is in the form of equity ownership in troubled, or previously troubled, companies. Treasury (and therefore the taxpayer) remains a shareholder in companies that have not paid back the Government. 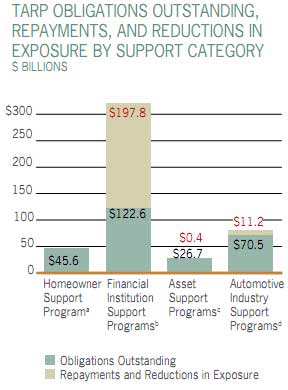 The next graph from the report (page 48) is a break down in who got the money and what funds are still owed. While the auto bail out still has not been repaid, notice GM and Chrysler didn't get anywhere near what Wall Street received and the financial sector still owes way more than the Auto companies. Of course the homeowner is an afterthought. The U.S. Treasury currently owns 61% of GM and 56% of GMAC (now called Ally Financial). 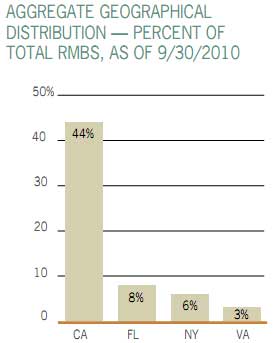 While we know Treasury bought a bunch of toxic assets, in terms of the ones backed by residential mortgages, the graph on page 140 breaks it down geographically. Interesting! Who would a thought California with a bunch of liar loans was being backed up by the U.S. Treasury (repackaged as securities). 30% of all RMBS are delinquent 30 days with 27% of those being late 60 days.

The report concludes with a series of recommendations, and a spreadsheet of which previous recommendations were implemented, which were not. The PPIP area has a series of not implemented X's as noted in the above blasts. One must wonder if Neil Barofsky wanted to just write in big bold letters Fire Geithner and leave the other 338 pages blank. Here is a blast at U.S. Treasury for accusing SIGTARP of harming taxpayers by having the gall to tell us what's going on.

SIGTARP was created for one central purpose: to protect the taxpayer. It is a job SIGTARP takes very seriously, and as demonstrated later in this section, SIGTARP is more than willing to err on the side of caution when it comes to disclosing information that may harm the taxpayer. Treasury’s suggestion that SIGTARP has done otherwise in this case, without disclosing the significant relevant factual background on this issue, is unfounded, inappropriate, and extremely unfortunate.

People in this country are extremely ignorant without a doubt; but, that does not mean they are stupid. They really don't need some fool on the TeeBee tellin' 'em that 'Happy Days are Here Again...' no, nor no idiot 'blogger' who never had a real job, think Bowers or Kos, to tell 'em that the President is their only hope.

They believed last cycle but now they are done with delusion.

You have to swim through this stuff to get to the meat, but Naked Capitalism has some good quotes on HAMP, many also from this same report.

TARP was passed in October 2008 under Bush, not Obama. Obama amended it to add the auto bailouts.

Obama extended the second half of the TARP, but the auto bail outs are the least of the worries. I personally think the auto bail outs were worth it, in terms of jobs and having an auto industry. It's the fact he kept it in place and almost first thing, passed the second part of TARP, about $350 billion. Add to that we did not get financial reform, TBTF is in place, derivatives, nothing happened and that's where the rubber hits the road in terms of all flavors of the political spectrum being outraged. (except for those in power of course).

I am opposed to both legal and illegal immigration. This country is overpopulated, and 21 million Americans are out of work.