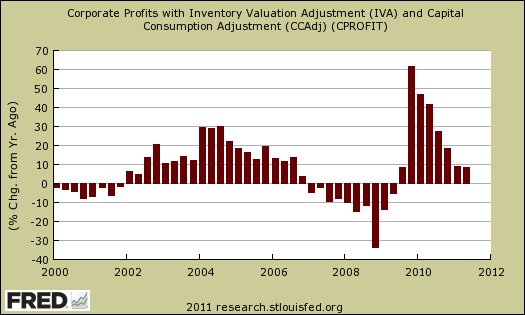 What is astounding is the massive amount of cash corporations have for investment. Net cash flow increased $83.8 billion from Q1 and corporations now have over $1.8 trillion dollars available for domestic investments and hiring people, which everyone in America is aware they are not doing, astounding. This quarter the financial sector didn't do so well, their profits declined.

Quarterly tax receipts also declined for Q2, -$3 billion in comparison to $17 billion in the first. That said, to truly get a feel for how much corporations are really paying, or not, one needs to look at annual returns.

Profits after tax with inventory valuation and capital consumption adjustments, increased 4.1% for Q2 2011 and are up 9.2% from last year. The BEA reports corporate profits in a variety of ways and it seems whatever one's focus and political predilections are implies which number they use.

Bottom line Q2 shows the same thing we've seen for some time, corporations are slashing their workforce and sitting on cash instead of using it to hire and expand (uh, domestically).