When you bite down into that hamburger, do you know what's in it?   Well, the new mystery meat is the massive financial black box (what's inside is anyone's guess!) world of derivatives and credit default swaps.

Finally, the New York Times writes a detailed article, What Created This Monster, and exposes even world leading economists do not know what derivatives are or in most cases, the details of how they work.

These products are virtually hidden from investors, analysts and regulators, even though they have emerged as one of Wall Street’s most outsized profit engines. They don’t trade openly on public exchanges, and financial services firms disclose few details about them

Large amounts of risk have become concentrated in the hands of relatively few derivatives dealers ... which can trigger serious systemic problems

Ok, that's scary, so what are these things?

Then, more educational youtubes with one on the credit default swap:

Whew, ok, so now we have a vague idea of what they are talking about...and we're more frightened.    Did you see those little arrows of contracts and obligations that went back and forth to each other, yet had decoupled from the actual original security?

Indeed, plenty of commentary abounds with little factual analysis. It's like a black hole of mystery, what is this work of financial fiction that might implode the global financial markets and tank the US dollar?    Oops, they aren't telling!

From a UK article, Fed's Rescue Halted a Derivatives Chernobyl:

We may never know for sure whether the Federal Reserve's rescue of Bear Stearns averted a seizure of the $516 trillion derivatives system, the ultimate Chernobyl for global finance

"There is no real way to gauge the market risk," said an official.

But JP Morgan is already up to its neck in this soup, with $77 trillion of contracts. It will now have $90 trillion on its books, a sixth of the global market

Now on the Fed bailout, there is mention that these credit default swaps are the reason these bailouts magically occurred. (Graphics from New York Times article) 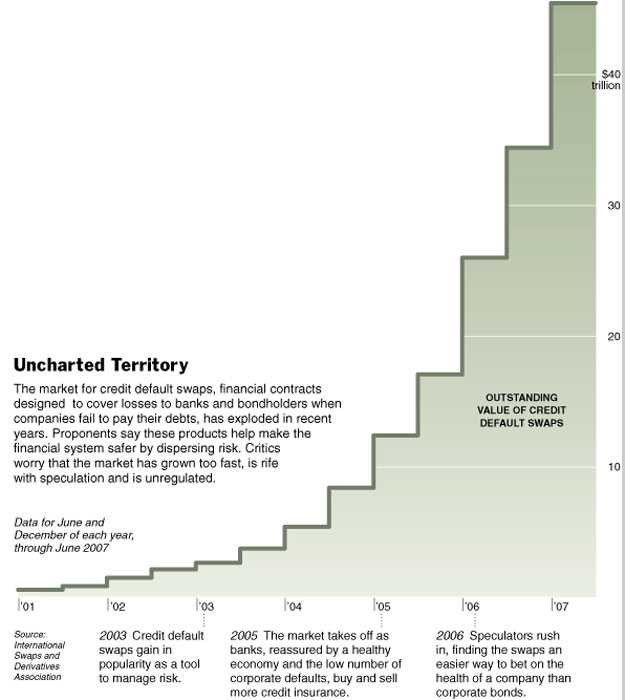 My current assessment: The entire thing is fictional paper wealth and when the real risk became due, the Fed magically changed the rules of the game and all of this paper debt disappeared, or did it?

To the left, look at these trillions in CDS (New York Times graphic).

Where is Congress on all of this? Where have they been? On the lack of regulation (same NYTimes article)