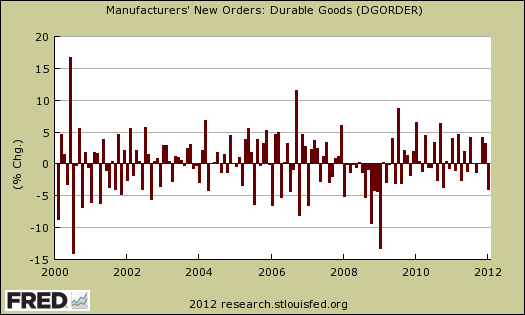 Shipments overall increased 0.4% from December. Below is the monthly percent change for all durable goods shipments. Inventories, which also contributes to GDP, are at an all time high and up +0.7% for January. Inventories have been at all time highs for months and have increased for 25 months in a row. Core Capital Goods inventories increased 1.3%.

Core shipments contributes to the investment component of GDP. The graph below is core capital goods shipments, quarterly annualized percent change. As we can see, the effective rate barely registered for Q4. Q1 2012 is getting off to a terrible start. This CPA has the list of expiring 2011 tax credits. I just don't have enough knowledge or statistical details to know how much the business 100% depreciation could have affected manufacturers new orders in December. I guess we'll see when this report is revised.