A woman named Dawn Hughey had worked at a Dollar General store for just four months when she was named "manager" of a store in the Detroit suburbs in 2009. Having recently moved home after a stint in California, Hughey had hoped the new honorific title (and its accompanying annual salary) would help her start a new life in Michigan. But like other managers in America's booming dollar store industry, Hughey quickly came to realize she was a manager in name only.

The major dollar store chains --- Dollar General, Dollar Tree and Family Dollar --- have thrived by offering customers rock-bottom prices that rival Walmart's, a business model that requires shaving costs wherever possible. For a manager like Hughey, that meant working far beyond a 40-hour work week.

But in interviews and court documents, former and current store managers claim major dollar store companies classify them as managers merely to evade overtime obligations --- and to pay them less money. Those manager/employees, in turn, have accused the companies of illegally shorting them on pay and forcing them to work off the clock due to payroll constraints.

Several workers at these dollar stores told the Huffington Post that they lost their jobs or their hours once they got hurt or encountered health problems, leading to bitter feelings and long legal battles. Employers have literally been waging a war on workers for decades, and just like Warren Buffett had said, "We're winning." Dawn Hughey at the Dollar General store had said, "We're disposable."

Sometimes you can get a better deal at Dollar General than at Family Dollar. Just ask the discount retailers' CEOs. In the case of the dollar retailers, the difference was a pair of golden handcuffs.

The CEO of Dollar General, Mr. Dreiling, had a retention pay package that was worth $22.5 million in 2012. "Given his track record, we think it's very valuable for our shareholders to keep him motivated and in place,'' said Mike Calbert, Dollar General's lead independent director.

A competitor, Family Dollar, posted an even better annualized shareholders return of 30% over the past three years. But total compensation for its CEO, Leon Levine, came to just $5.2 million in 2012. He didn't receive a retention bonus, but he did get $3.16 million worth of stock options and so-called performance share rights.

Speaking of CEOs..... a new study shows that nearly 40% of the top paid CEOs really sucked at their jobs, sometimes costing their company (or the taxpayers) a small fortune. One example might be the CEO of a major league baseball team, who had to pay 74 employees $544,715 in back wages and liquidated damages after a Department of Labor investigation determined that the baseball club paid these workers below the minimum wage over a three-year period.

Meanwhile, thousands of other under-paid workers at McDonald's, Burger King, Wendy's and KFC went on strike in 50 cities last week --- from Boston to Denver to Los Angeles --- demanding a living wage of $15 an hour. They were joined by retail workers at stores like Macy's, Victoria's Secret and Walgreens. Many of these workers need food stamps as wages subsidies to survive.

In a Labor Day statement by Secretary of Labor Thomas E. Perez, he wrote, "We're fighting for an honest day's pay for an honest day's work. It's a moral and economic imperative that we raise the federal minimum wage. People who work full-time in America shouldn't live in poverty."

The striking workers may have been wondering where all the good jobs have gone --- and wondered why the U.S. has less tax revenues, creating an "out-of-control" federal budget deficit. Why are they, and almost everybody else (except for the CEOs), working harder for less money than they did in the 1990s?

A new documentary titled Death by China (based on the book by Peter Navarro and Greg Autry) might provide an answer to that. The film shows how the world's most populous nation and soon-to-be largest economy is rapidly turning into the planet's most efficient assassin through its shoddy and even poisonous products and environmental pollution. China's perverse form of capitalism combines illegal mercantilist and protectionist weapons to pick off American industries, job by job.

It's a crime against the American worker that America's top executives, politicians, and even most academia remain silent about this looming threat.

U.S. corporate profits are again at record highs as a share of national income, while worker's wages fell, and is now at the lowest share it's been since 1955 --- while CEO pay is also at record highs as the pay gap between CEOs and average American workers has grown from 195:1 to 354:1 over the past 20 years. 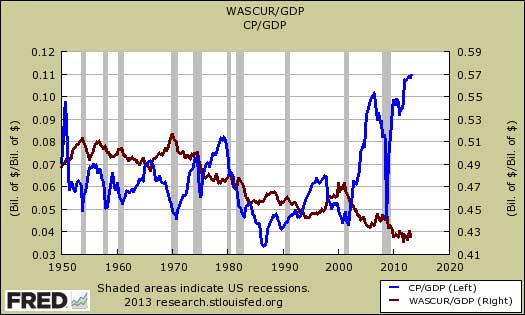 Economic inequality is a real and growing problem in America. Since 1979, American workers are working more and making more goods, but are not reaping the rewards of their increased productivity. Instead, CEOs and other corporate executives (the top 1% of earners) now take home 20% of the nation's income. But it doesn't have to be like this. Growing inequality isn't an inevitability --- it was created as a result of intentional policy decisions regarding outsourcing, taxes, labor, financial regulation and "free trade agreements".

Besides the abusive guestworker programs, the NAFTA trade agreement was one such fiasco --- and the looming TPP trade agreement (NAFTA on steroids) will mean more lost jobs --- and will also force the Trans-Pacific region (including poor countries like Vietnam, Malaysia and Peru) to transform laws so as to provide special expansive monopoly protections for pharmaceuticals, while also placing serious limits on countries' programs analogous to Medicare and Medicaid.

The TPP would give a green light to abuse the patent system, keeping medicine prices higher for longer. These demands, made on behalf of the pharmaceutical industry, are the most aggressive and dangerous we have seen in any trade agreement. They reverse even the modest health safeguards negotiated under the George W. Bush administration.

And recently, a lot of attention in Washington has been directed towards immigration reform. Since the creation of NAFTA, nearly 300,000 family farms in Mexico have been put out of business, forcing Mexican workers to seek employment and better opportunities elsewhere --- in the United States, where a minimal of 20 million Americans now want and need full-time jobs.

But at least the workers at McDonald's, Burger King, Wendy's, and KFC have jobs, even if they are crappy jobs. Rep. Steve King (R-IA) told a crowd in South Carolina this week that unemployed people were like children who wanted to eat before they did their chores. King said that there were over 100 million people who were "simply not in the work force".

A new study shows that nearly one-fifth of U.S. scientists may also be "no longer be part of the labor force". They are considering going overseas to continue their research because of declining budgets (due to special tax rates for the wealthy and low "effective" corporate tax rates) --- and because of the government sequestration. (Earlier this year the Republicans had mocked scientific research in their sequestration talking points.)

In other recent news...we are tittering on the brink of another war in the Middle East again. But have no fear, because a U.S. attack on Syria could translate into big bucks for defense giant Raytheon, which makes the Tomahawk cruise missile (President Barack Obama's weapon of choice).

"There are many of us who have been concerned for years about maintaining our missile capabilities," said Rep. Rob Bishop (R-Utah), a member of the House Armed Services Committee.

But Rep. Alan Grayson (D-Fla.) disagrees, and said Thursday that he can't support an attack on Syria. "Nobody wants this except the military-industrial complex." Alan Grayson had also noted Raytheon's stock uptick for profits that will be fueled by taxpayer money spent in the defense budget.

So who's been really gaming the system, poor workers, or wealthy investors?

Paul Krugman: " It wasn’t always about the hot dogs. Originally, believe it or not, Labor Day actually had something to do with showing respect. Here’s how it happened: In 1894 Pullman workers, facing wage cuts in the wake of a financial crisis, went on strike and Grover Cleveland deployed 12,000 soldiers to break the union. He succeeded, but using armed force to protect the interests of property was so blatant that even the Gilded Age was shocked."

Following the deaths of a number of workers at the hands of the U.S. military and U.S. Marshals during the Pullman Strike, the United States Congress unanimously voted to approve rush legislation that made Labor Day a national holiday; President Grover Cleveland signed it into law a mere six days after the end of the strike.

Rather than putting CEOs on a pedestal, maybe it's time we start showing workers a little respect again.

Slave labor was what America was founded upon. Foreign countries also use the technique very well. China, India, Mexico and other countries have the upper hand when they can negate environmental laws and pollute with immunity, employ with no labor laws where overtime is forced and working conditions horrible and governments back their wealthy contributors until some tragic event occurs.

While big-box retailers such as Walmart and Target are losing traffic, shoppers—especially those on the lower rungs of the income ladder—are still turning up at dollar stores. The migration of consumers down the retail ladder shows that plenty of shoppers remain frugal and are closely watching their spending. On Wednesday's earnings call, Dollar General Chief Executive Rick Dreiling said the company still has a cautious outlook on the consumer.