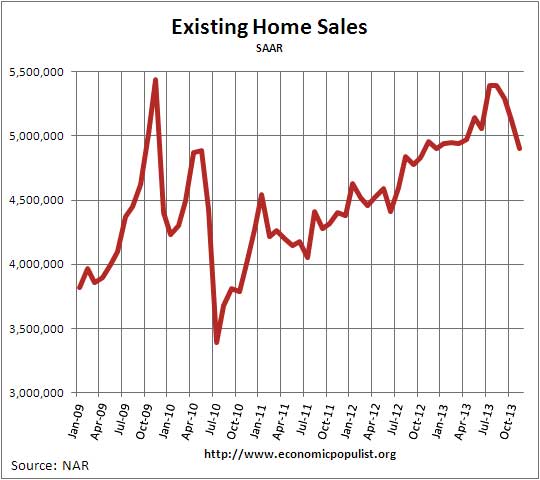 The national median existing home sales price, all types, is $196,300, a 9.4% increase from a year ago.  Below is a graph of the median price.  One needs to compare prices only a year ago for increases due to the monthly ups and downs in prices associated with the seasons.  The recent plunge in the below graph might be seasonal in other words. 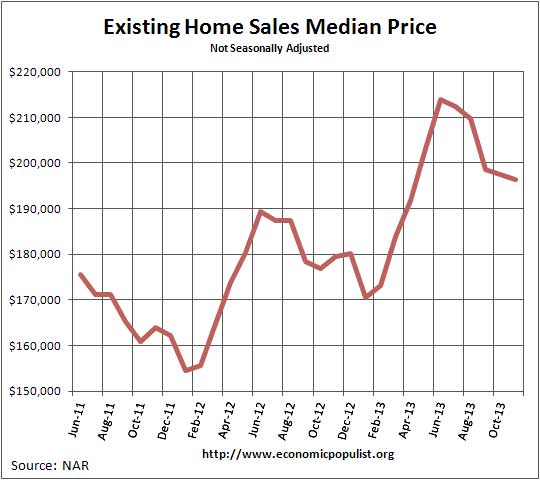 The average home price for November was $244,500, a 7.3% annual increase.  The NAR went into denial mode again on the declining sales and blamed a low supply as the cause.  They also claimed there is this amazing pent up demand for homes being squeezedby mortgage interest rates and low housing inventory.  Wages and the fact most Americans cannot afford a home never enters the NAR dialog.  They do mention price increases and claim rents have increased at the highest pace in five years and annual home price increases are at the fastest pace in eight years.

Foreclosures sold for an average discount of 17 percent below market value in November, while short sales were discounted 13 percent

While NAR seems to be in denial about slowing sales and the large percentage of all cash sales, there is some things coming down the pike which should decrease sales further.  From the NAR:

NAR President Steve Brown, co-owner of Irongate, Inc., Realtors® in Dayton, Ohio, noted that new rules defining the Qualified Mortgage will be going into effect soon. “New underwriting rules to protect borrowers, effective in January, will prohibit many loan features, set tighter limits on the amount of debt a borrower can have and still get a mortgage, and require that lenders accurately measure a borrower’s ability to repay,” he said.

“This means that qualified borrowers are getting a loan that they are very likely to be able to repay, but some borrowers may wind up paying much more for their mortgage, or not get a loan at all due to the tougher standards,” Brown said. “The new rules may tighten credit too much, but we’re hopeful regulators will make adjustments if this proves to be true.”

RealtyTrac showed November foreclosures are at the lowest level in five years and declined 32% from a year ago.  This implies investors swooping up other people's homes might be running out of supply.  Corelogic recently reported 6.4 million homeowners have underwater mortgages.

Below is NAR's breakdown by existing home sales type and regions.

Existing-home sales in the Midwest fell 4.1 percent in November to a pace of 1.17 million, but are unchanged from a year ago. The median price in the Midwest was $151,100, which is 6.7 percent higher than November 2012.

Existing-home sales in the West dropped 8.5 percent to a pace of 1.07 million in November, and are 10.1 percent below a year ago, in part from constrained inventory conditions. The median price in the West was $284,400, up 16.5 percent from November 2012.