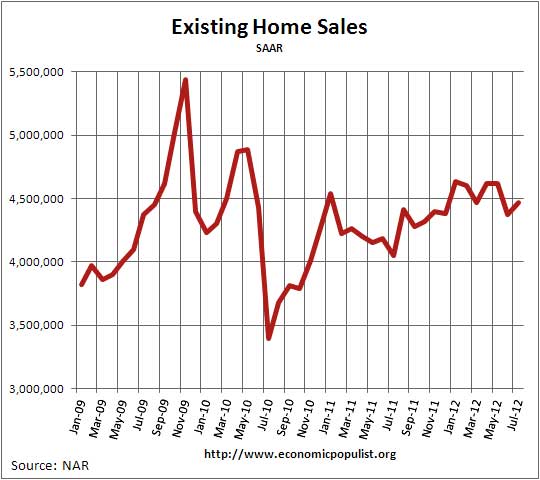 The NAR claims the reasons for low existing sales are constrained supply and tight lending standards. We're shocked to see commentary that is actually true. Of course they leave out the fact most of America isn't earning enough to afford a mortgage.

The market is constrained by unnecessarily tight lending standards and shrinking inventory supplies, so housing could easily be much stronger without these abnormal frictions.

Total housing inventory at the end July increased 1.3 percent to 2.40 million existing homes available for sale, which represents a 6.4-month supply at the current sales pace, down from a 6.5-month supply in June. Listed inventory is 23.8 percent below a year ago when there was a 9.3-month supply.

One press release comment has to be called out. The NAR claims increases in median existing home prices contributes to economic growth. Uh, no, it increases their commission take. Existing homes are not part of GDP, they have already been attributed to economic growth when they were first built and sold. The transaction costs and profits, activity surrounding selling an existing property are part of GDP, but that's obviously not a huge stimulus.

The NAR mentions pressing for the release of more foreclosures onto the market.

Housing wire reports half of Fannie Mae's foreclosures are not being put back onto the market for sale.

Fannie disclosed for the first time this year where these properties are in the lengthy and complicated REO process. In its second quarter financial filing, the government-sponsored enterprise said 23% of its more than 109,000 repossessed homes are currently available for sale.

An offer has been accepted on another 19%, and 11% have an appraisal pending, Fannie said.

But 47% of its inventory is unable to be marketed.

Roughly 14% of Fannie's entire REO inventory is redemption status, meaning the time frame borrowers and second-lien holders can redeem the property under various state laws. The timelines vary and have come under much change across the country. In Michigan, for example, lawmakers passed a bill last year to extend the redemption period to as much as one year in some cases. The bill was referred back to a state committee in March.

Fannie said another 13% of its properties are still occupied by the borrower. The eviction process just hadn't been completed.

Interestingly, 8% of its inventory – slightly less than 9,000 homes – are being rented as part of its piloted Tenant in Place or Deed for Lease programs, where the home is rented back to the borrower.

Its other piloted program to sell roughly 2,500 homes to investors, who were approved in recent months to rent the properties out, will close at some point in the third quarter.

There are distortions in housing inventory. “The total supply of housing inventory appears to be balanced in historic terms, but there are notable shortages in the lower price ranges which are limiting opportunities for first-time buyers,” he said. “The low price ranges also are popular with investors, so entry-level buyers are at a disadvantage because many investors are making all-cash offers.”

Regardless, with all of that shadow inventory being held back, people expecting this magical housing recovery bubble return are sure to be disappointed.

This is fucking bullshit!! How do they expect first time home buyers to compete with the investors, you know they're cutting deals with the banks and agents.. Complete and utter bullshit, I have been looking to buy a home for 1 year, and all of the good deals are taken before they are even put up on zillow or realtor. I refuse to pay 362000 for a house in the ghetto, while there are 50 forclosures in the same neighborhood, just because some investor bought it at an auction, threw on some cheap paint and sod in the front yard and now wants to flip it. So frustrating!!

We started covering residential real estate only because there is so much B.S., lies and crap coming out from these vested interested parties. Our real focus is on middle class, jobs, income, macro economics.

That said, with almost every statistical release, we point out how wages, income are repressed, the majority of people simply cannot afford a $200k home, never mind a $350k one as you point out.

Then, these "investors" gobbling up REOs and "flipping" them to make a profit is yet another example of trading shelter like dominoes for profit. It simply shouldn't be this way but residential real estate is still just considered another commodity for profit instead of providing stability and homes for Americans. I don't know the full history here with residential real estate, mortgages and regulations but I sure do know packaging up mortgages into derivatives for sale is a major part of the problem.

What's amusing is I've heard several people claiming that these artificially increased property and home values are the 'new normal'. I was looking at one 70 year old house in Long Beach, not a bad place in a so-so neighborhood and decided after running the numbers the mortgage payment would be too much of my take-home pay and the realtor asked me if I would consider taking in a room mate to help with the expenses. Excuse me? Are you f'ing joking? I make a decent living (in the old days I would be considered 'middle class') and have no huge debts and a 790 credit score and a solid work history and I almost feel entitled to be able to BUY A DAMN STARTER HOME in a decent neighborhood LIKE MILLIONS OF OTHERS in the recent past.

Take in a room mate. Sell drugs. Steal cars, open a chop shop. Sell my body on the streets. Any more helpful hints?

I've actually heard that to get a job said. The cost of living was so high they would "suggest" new hires get a roommate so they could "afford rent". Uh huh.

Now it's made it to home buying. Well, they want to keep the prices up for profits, for a variety of residential real estate derivatives still alive and well, which is beyond pathetic, and for existing home owners to not be "underwater".

We even have government policy all about not letting home prices return to where the "new normal", i.e. most of Americans are not middle class but the working poor, can afford them.

My suggestion would be to find a REO or short sale. Estimates on the foreclosed properties being held off of the market are anywhere from 50-95% of foreclosures. You're in LA, the land of the insane. Case-Shiller has an LA price index for housing and it's still absurdly high, even though prices are down 40% from the September 2006 peak.

We cover macro economic data here but I feel for anybody living on the West coast, with the highest unemployment rates, some of the highest taxes in the country and over-inflated home prices. It doesn't add up in so many words, their economic overall indicators.

I know plenty of people, all with the necessary degrees, years of experience, that would never qualify (legitimately, of course, not bankster liar loans) to buy homes. And they're not in their 20s, but what used to be prime earning years, 30+. Years of experience, but unemployed, long-term unemployed, or simply contract workers that are invisible (they aren't officially "unemployed," but that doesn't stop them from starving and never collecting one unemployment check - you hear that moronic politicians and their nonquestioning followers, not one check). So how could these people every buy a house? And the other thing is in USA 2012 aka "Bankster Thunderdome," how could anyone trust they would keep a decent job that they could pay monthly rent from, let alone mortgages. The writing is on the wall - we are all expendable for a CEO bonus. Companies could sh*tcan you at any moment, force you to become a temp, an intern to train an H-1B, tell you to move across the country within 2 days or get fired, or just fire you. In 2012, shacks and huts and tents and mobile homes are seriously housing considerations for those who never dreamt of them - and when I say that and people who aren't CEO levels or purposely ignore the middle class devastation (i.e., those watching MSM and never read economic and non-D+R run political blogs) know that is a real possibility, our country is officially in the crapper (brought to you by multinationals and their puppets). A home? Long-term thoughts like marriage or kids for most? Even a dog (who knows, you might have to move overseas within 60 days or move to an apartment in a new city within 1 month - goodbye Rex)? A job people can survive on, use their skills and education in, and plan on keeping for more than 1 year? Fantasy at this point. Even if they had the money, who could trust Bank of America or Wells Fargo (brought to you by Mexican cartels) or HSBC (brought to you by Iran) to handle any paperwork or be honest for 20-30 years? Trust banksters with long-term contracts and not to forge signatures? Maybe 10 years ago. No more.