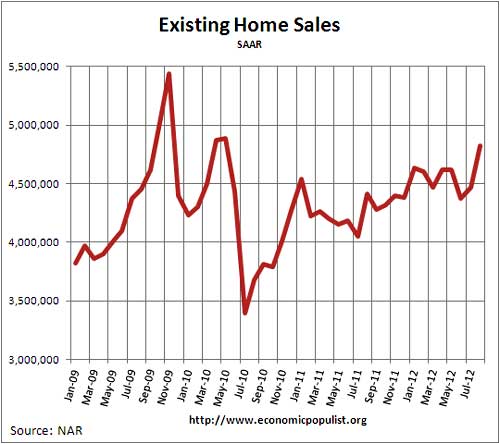 While inventory increased 2.9% or 2.47 million existing homes for sale, due to increased sales the monthly supply dropped 4.7% to just 6.1 months of supply. This is a 25.6% decrease from a year ago.

The national median existing home sales price, all types, is up, now at $187,400, a 9.5% increase from a year ago. It's clear foreclosures, REOs are being held off of the market. Below is the August breakdown by types of sales:

According to NAR 32% of existing homes were on the market less than a month.

First-time buyers accounted for 31 percent of purchasers in August, down from 34 percent in July; they were 32 percent in August 2011.

Realtytrac reports in Q2 2012 foreclosure supply on the market decreased. 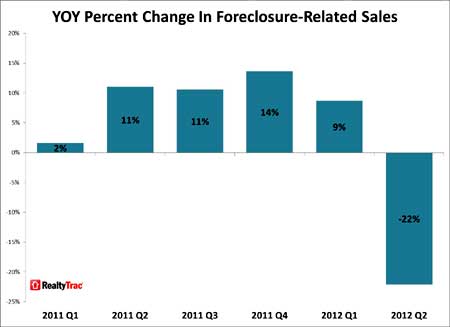 Foreclosures in August were little changed, according to Realtytrac:

Foreclosure filings — default notices, scheduled auctions and bank repossessions — were reported on 193,508 U.S. properties in August, an increase of 1 percent from July but down 15 percent from August 2011. The report also shows one in every 681 U.S. housing units with a foreclosure filing during the month.

According to Corelogic, for the 2nd quarter, homes with a mortgage in negative equity were 23.7%.

We couldn't find an update to the estimates of how many foreclosed properties, REOs were being held off the market. Last estimate given around July put this percentage at 85-90%. That said, some are pointing to localized shadow inventory being the problem and overall bank owned properties are down.

END_OF_DOCUMENT_TOKEN_TO_BE_REPLACED

House discusses 401k/IRA confiscation - 255571 reads
The Economic Populist Site Rank, Statistics and All of That Jazz - 144924 reads
The Federal Reserve Destroyed Our Site - 124091 reads
The QE2 Binge - Inflation on the Horizon - 60809 reads
Obama Signs Deal to Allow Mexican Truckers Onto U.S. Highways - 58586 reads
Wisconsin Does the Nasty Against Labor - 125390 reads
The Obama Administration is Training Offshore Foreign Workers to Take your Job - 67171 reads
Saturday Reads Around the Internets - Government Complicit in Libor Mess - 9105 reads
The Approaching Muni Bond Implosion - 29822 reads
Libya, Gas Prices, and the Big Payday at Your Expense - 48103 reads
Will the NY Attorney General Bring Doomsday Charges Against Wall Street? If So, How Long Will He Survive? - 1182917 reads
New York Post Claims Census Falsifies Unemployment Figures - 897536 reads
Safeway Skewered for Throwing 6,000 Workers Under the Bus in Video Parody - 396617 reads
How Many Jobs Are Needed to Keep Up with Population Growth? - 284567 reads
VAT or Value Added Tax is Getting a Look in D.C. - 279102 reads
U3 and U6 Unemployment during the Great Depression - 272194 reads
Tax Cuts for the Rich Do Not Generate Jobs - 257985 reads
House discusses 401k/IRA confiscation - 255240 reads
Delusions of Normalcy 2011 - Dismal Scientists Cheer Up - 245308 reads
The war on the middle class - 243710 reads