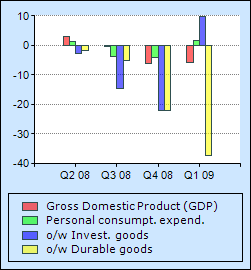 The level of industrial production in rich countries has dropped by 15 percent since August 2008, and that in developing countries, excluding China, by 10 percent.

Why are they excluding China all of the time?

Answer: China is clearly kicking the global economy's ass and seemingly not even a glitch in becoming the world's dominant economy.

So, what we see is almost a redistribution of wealth from 1st world countries to emerging economies and once again it appears the World bank removed the China and India statistics.

Drop like a cliff right? Yet look once again at developing countries:

In the 25 developing economies that report quarterly national accounts data, investment growth in the final quarter of 2008 fell by an average of 6.9 percent, or at an annualized pace of 25 percent.

Anyone else sick to death of jobs, wealth and investment pouring out of the United States along with our standard of living and quality of life? China and India remind me of the British empire of the last century.

Here is a World Bank statement of the bailouts effects I see no proof for:

Policy reactions to the crisis have been swift and, although not always well coordinated, have so far succeeded in preventing a broader failure among financial institutions, and thereby avoided a much more severe collapse in production.

The GAO just released a report stating they could not directly correlate the Treasury & Federal Reserve actions to Macroeconomic effects.