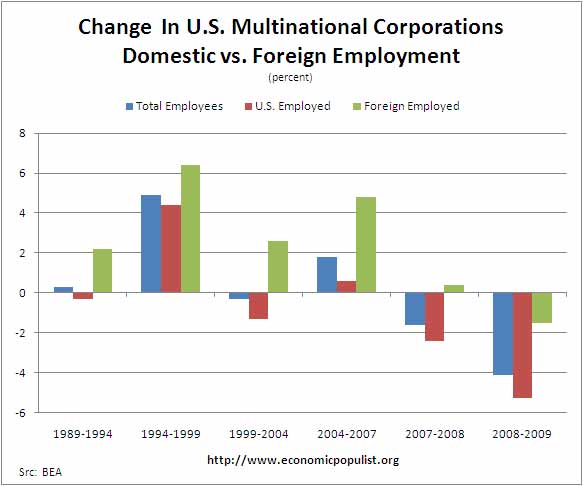 In 2009, these large multinational corporations fired Americans to the point of reducing their workforces 5.3%, yet in foreign countries, only reduced their workforce by 1.5%.

While the report gives data for 2009, it also shows over time, we have a clear cut pattern of U.S. Multinational corporations hiring less Americans, hiring more abroad. When it's fire season, these same companies are firing more Americans than those canned abroad. The data also shows they used this recession to hid their never ending offshore outsourcing of American jobs.

The below graph shows these companies fired American employees by 2.9 million while hired over 2.4 million people in foreign nations for the 1999-2009 decade. Recall the China trade agreement went into effect about this time, as did cheaper Internet which enabled offshore outsourcing of services to India. 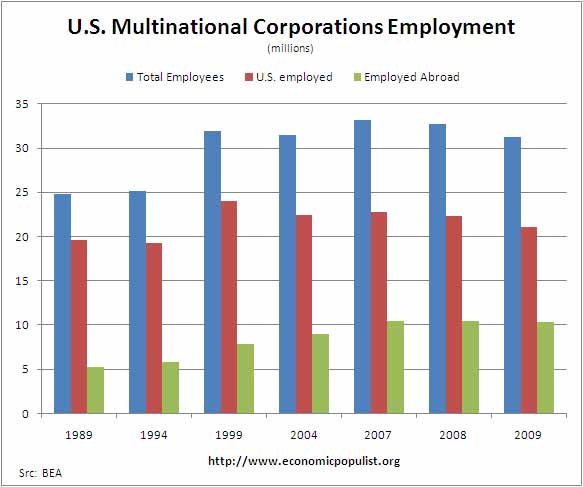 Notice in all of these graphs, the dates are not linear, therefore the slope, or decline of American jobs appears stronger if you read the bars as a year to year comparison, so pay attention to the date at the bottom. Regardless, the graphs do show a valid, clear cut pattern of offshore outsourcing, or moving jobs, investment offshore by large U.S. multinationals.

Below is a graph of the drop in overall employment in the United States by multinational corporations versus the rest of the globe. 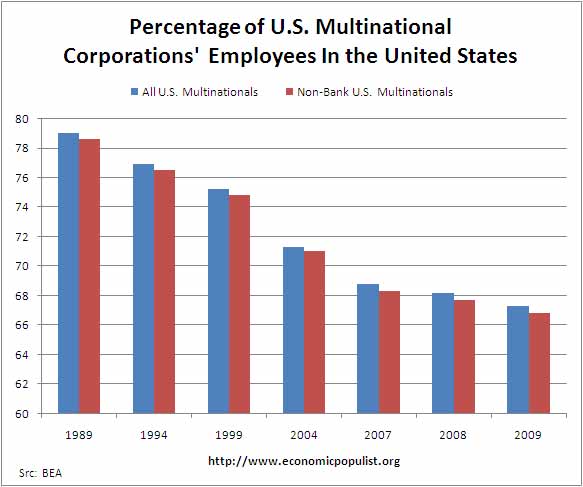 Believe this or not, we have some idiots out there trying to claim Americans suck and are stupid and that's the reason this is going on. Not by a long shot. Multinational corporations have their bean counters analyzing everything from cheap labor to where to park their profits to make sure they never pay taxes. It's all about squeezing the worker and their Benedict Arnold herd mentality that all quarterly profit increase roads lead to China.

If you're wondering what happened to the American dream and the U.S. middle class, there it is in the above graphs, shipped off to China, India, Brazil and any other nation somebody almost randomly labeled an emerging economy. It's mind numbing corporate herd behavior. If a nation is labeled an emerging economy, they all get on the bus and ship investment and jobs sover there.

Just so you know the BEA ain't smoking crack, the above data results are also reflected in the ADP employment report. ADP breaks down private hiring by business size. Their reports repeatedly show almost a flat line in job creation by large U.S. businesses.

That's definitive analysis, thanks to the BEA and your clear exposition.

When will they just move overseas entirely?

When there's no market to buy their products here.

We're just a number or too to them.

This should go viral.

But aren't they the same multi national corporations that want American military protection and use of their resources when they get threatened out in that same big bad world?

We should charge them for protection! A big chunk of our tax dollars and deficit spending are appropriated for defense spending. Just think. Tighten up our budget and get them thinking of either moving (good riddance) or coming back home and putting their money where their security originates.

Probably many of the same companies are lobbying for repatriation of overseas earnings (both actual and sheltered), as well as for reduced taxes (even if they don't pay any taxes by way of their tax avoidance schemes, they would need to spend less accounting & legal fees if rates were reduced).

Yet those companies are likely the first to have requested bailouts, and US influence and protections in overseas business and disputes.

What's maybe even more incredible is they want even more!

Maybe, if it's carefully managed, war as a business proposition is a rare possibility. President G.H.W. Bush managed it with the First Gulf War. The problem is that our military operations, if not our military itself, have become corrupted by the same viral cupidity that has corrupted the rest of the U.S. government. U.S. defense spending is probably the most corrupt area of government expenditures, so it's pouring precious resources down a bottomless well that will never again draw water or anything else for the American people.

Not really a good business plan.

Overall, we have to face the reality that war as the leading export of the U.S. cannot be considered a business plan with any real chance of success.

...and your country, and unfortunately there is no organized opposition that is fighting against these multi-national corporations. These multi-national corporations have been able to do what Hitler, Stalin, and the rest of this country's enemies have never been able to do, they have brought this country to it knees and have destroyed its economic power, and the ability to remain a military superpower. Growing up during the Cold War we were always taught that this country's enemies were the communists and other authoritarians, little did we know that the most dangerous enemies were within our own borders and in the boardrooms of our largest corporations. These greedy traitors were the ones to truly fear and had the ability to do the most damage, which we now see across this once great country. Gentlemen this is a war we are in and we are losing, we need to do more that talk and write about it. A political movement needs to rise up and crush this corporate hold over our country and its two major political parties. Let's take action!

Someone just got done fear mongering about Methamphetamine and compared it to Hitler on another forum. Theses damn nazi analogies go a bit overboard. Aside from that I completely agree with all you wrote. Let's do something and let's start tomorrow. I have no clue what that something is. One thing I know for sure all ideas good or bad needed to 'start somewhere'. Anyone who is prepared to command an immediate response from both major parties(Republican / Democrat) who obviously have done nothing - write me.

...just listed some of our major enemies of modern times.

Yes, we are at war but who ever heard of Congress refusing to raise the debt limit in a time of war? Cognitive dissonance, anyone?

We don't even identify to ourselves, in any of what purports to be the mass media reflection of the public mind, our greatest "potential adversary" (to use the politically correct term), which is clearly the People's Republic of China.

The U.S. is in a recession while China booms - and how much of the foreign investment over the last couple of years into China was literally money from the U.S. bailout of the "US multinational" financial sector?

The thing is that it looks like we have not been suckered so much as we have suckered ourselves and continue to do so.

I don't claim to know the answers to all this, but the situation is obvious.

...page. We then can Like them and Share them to get them out to more people. They seem to have stopped in February.

I would fix it but unfortunately facebook has some ridiculous error which gives "enable cookies" which they are. Spent a good 3 hours trying to deal with that and obviously I'm pretty technical, it's clearly their problem. Why do you people use that site. Seriously.

Anyway, you can share by simply copying a URL or subscribing to our RSS feed.

...but it has become the predominant technology that people use to share information. If you want information to get out more effectively and exposed to more people, you use it.

but there crap sometimes makes that impossible, which is what just happened. But that's why we put the articles on facebook so those who use it can find them.

Another great article. Thank you.

Thanks for the compliment. I guess facebook locked me out because I remove all of their spyware/tracking crap. Not sure. But to me Facebook is yet another thing I have to learn as if it wants to "take over the Internet". I just don't get it but then, I want everyone to look at data and focus on economics too, so maybe that has something to do with it. ;0