The American Dream. Ozzie & Harriet. The great American middle class. Folks, it's gone for most. A distant memory only perpetuated to sell toothpaste and car insurance. 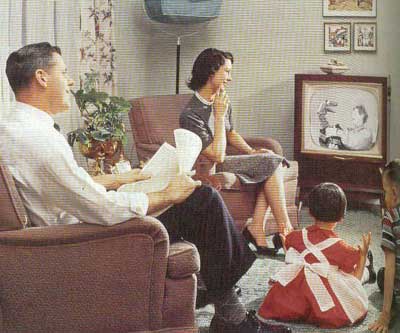 The The National Center on Family Homelessness has released a new report on homeless kids in the United States. 1 in 45 kids are homeless.

Since 2007, homeless kids have increased by 38%. The report notes this is worse than any natural disaster, including Hurricane Katrina. The report rightly notes financialization, foreclosures, recession and bank bail outs are all man made pain and who suffers? The most vulnerable in American society.

California, the great land of milk and honey and now illegal immigrants, accounts for 25% of all homeless kids and it seems California changes their counting methods so the report says this figure is low.

By State composite factors, including programs and policies, the best state to be in trouble is Vermont, the worst is Alabama. The worst state for the extent of child homelessness, adjusted for overall population is a surprise, hippie loving, granola crunching, liberal lovin' Oregon. The best state in terms of government programs and planning is Maine and the worse is Mississippi. 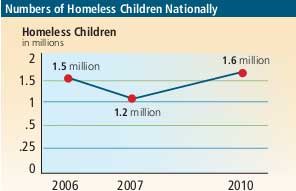 More interesting are historical trends. Homeless kids were unheard of from the 1940's to the early 1980's. No surprise considering the cut to programs and support, homeless kids started springing up in the mid 1980's. There was a huge spike in homeless children after Hurricanes Rita and Katrina, in spite of what you heard about FEMA trailers. The report goes into details for the year 2006 as well.

Pretty astounding and what a sad state of affairs for America. We can take care of banks and derivatives all day long but little kids who are desparate for a life basic, shelter, nah, I guess they are supposed to just pull themselves up by their own bootstraps.

The actual report, America's Youngest Outcasts 2010, is available here and goes into each of the 50 states by detail with more information on the effects of homelessness on children.

Thanks for citing the Homelessness study. I used this in a post that tied the tragic Grimmer story in Texas to shocking statistics like this. We need to convey what's really going on.
http://financeaddict.com/2011/12/suffer-the-little-children/

Here's the live link, but I don't exactly recommend that anyone click on it who hasn't already heard the tragic Grimmer story. I was one of those, thanks to my deliberate policy to avoid most corporate news sources ... but now I've caught up and wondering if ignorance wasn't bliss.

Anyway, here's the live link to a well-written but very depressing story --

Finance addict tells both the tragic Grimmer story and the big picture. I wonder how many Americans know the big picture of the millions of homeless children in the USA in 2011?

(You get to do live links and lots more if you register at this site!)

Yet the drumbeat for more immigration, more cheap labor, continue to roar.

And many of the people who will do their best to add the extra millions will tell you we owe it to others to allow them to come to America "to find a better life" while the quality of life for Americans continues to nosedive.

Has anybody ever read anything about plans we are making to accommodate a population that will rise by 1/4 in less than 50 years? A lot of the surge in population over the past 30 years was accommodated in cities that had experienced population reductions due to people leaving for suburbs.

With higher energy costs and so many more people, I agree with studies that indicate people will shift from outer suburbs back to near suburbs and cities.

Of course the price of real estate and apartments will be affected by this. Where are the many, many millions of Americans that make up "$10 Nation" going to live? Are we going to build million of units of subsidized housing units? Will native born American start living 4 families to a house?

Right now, we have some incredible propaganda claiming "immigrants create jobs". Well, if that were true, obviously the U.S. really would have a labor shortage. ;) We have less jobs, not more jobs and the area they love to focus, STEM, there are significantly less jobs, even going back to 2000. How they come up with this is by claiming foreign workers are not being used to replace U.S. ones, which is clearly false. Then, the claim is multiplicative, i.e. 5 $100k jobs will help support 5 additional crappy jobs at the grocery, McDonalds and so on. But that's also questionable when labor arbitrage is going on due to the flood of unskilled labor. To truly create jobs, they need to hire U.S. citizens, Americans, for those jobs and if they really want to create jobs, they will manufacture, do all services connected with the original job...in the United States. Manufacturing really scales and typically creates higher paying wages.

I'm sure you are right about population. That's another topic that fails to be mentioned these days, in part due to the infamous "anti-choice" groups. We just hit 7 billion people on the planet, and global warming just went past the point of no return.