The IMF has significantly lowered economic growth projections for 2012 and 2013. The IMF also predicts a mild recession for Europe in 2012 with the Euro Zone GDP projected to be -0.5% for this year. Below is the IMF chart for new economic output projections. 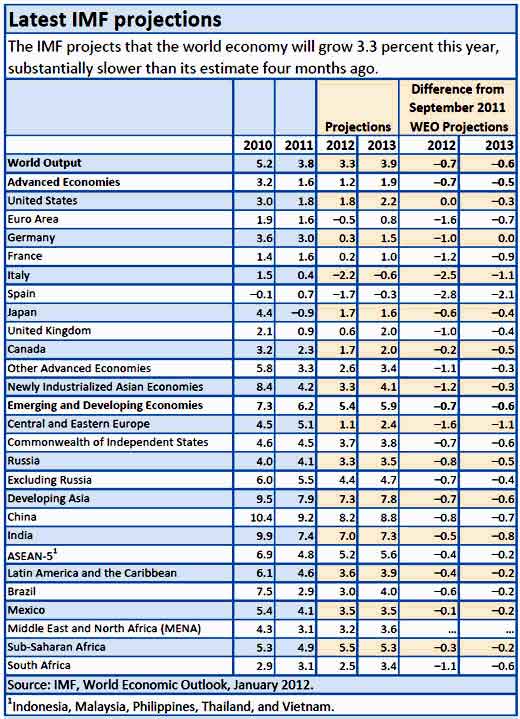 Italy is projected to have -2.2% 2012 GDP and -1.7% in Spain. The IMF also warned on aggressive austerity harming economies.

“The pace of fiscal consolidation in advanced economies in 2012 is already high,” said Carlo Cottarelli, head of the IMF’s Fiscal Affairs Department, which produced the report. “Too rapid consolidation, if economic growth slows, could exacerbate risks.”

Much of the slowdown in emerging economies is due to a reduced trade flow. In the World Economic Outlook Update, trade volume is project to drop -2.0% for 2012 and -1.0% for 2013. Advanced economies, which includes Europe, exports are projected to decline -2.8% for 2012. Prices are also expected to drop with a whopping -9.3% decline in non-fuel commodities due to weaker global demand. Oil prices are only expected to dip -1.8% in 2012.

The above economic output projections are assuming Europe enacts some comprehensive economic growth plans, doesn't punish themselves with too much austerity, and constructs economic firewalls between sovereign nations to contain the crises and contagion.

The IMF gave a little worse scenario for the Eurozone GDP in case some of the above assumptions for their baseline projections doesn't happen. In this case, the IMF gives a Euro area overall GDP decline of -4.5%. Gee, that's just slightly worse.

Euro area output is reduced by about 4 percent relative to the WEO forecast. Assuming that financial contagion to the rest of the world is more intense than in the baseline (but weaker than following the collapse of Lehman Brothers in 2008) and taking into consideration spillovers via international trade, global output will be lower than the WEO projections by about 2 percent.

The IMF gives much more detail, including graphs, on their website. Watch out, they tip toe carefully around the European financial crisis. That said, it's nice to see an austerity hawk like the IMF finally come out and say maybe stripping a nation of all it's public works and social safety nets isn't such a great idea after all.

“The longer we wait, the worse it will get. The only solution is to move forward together. Our collective economic future depends on it,” Lagarde said in a speech at the German Council of Foreign Affairs in Berlin. “Looking at it from this perspective, 2012 must be a year of healing.”

She laid out the main elements of a policy path forward. Europe, which is at the center of global concerns, needs stronger growth, larger firewalls, and deeper integration, she said, but added that other economies also have an important role to play to restore balanced global growth. As for the multilateral component, Lagarde said that the IMF was ready to help and was seeking to increase its lending resources by up to $500 billion.

We must all understand that this is a defining moment. It is not about saving any one country or region. It is about saving the world from a downward economic spiral, she said.

The IMF estimates that in coming years, additional global financing of potentially $1 trillion could be needed, which the Fund can help meet with additional lending resources. “A cooperative path means that all countries must work together with a common diagnosis toward a common solution,” Lagarde said, adding that the Fund can push for such a cooperative outcome through its analysis and policy advice, but also help by providing financing when needed.

“I am convinced that we must step up the Fund’s lending capacity,” she said. The goal here is to supplement the resources Europe will be putting on the table, but also to meet the needs of other countries, anywhere in the world, affected by the repercussions of the crisis, she added. Eurozone countries have already pledged to provide up to $200 billion in new financing for the IMF.

If a let the people suffer hawk like the IMF says this austerity thing isn't working, maybe the political pandering to blame the people will finally abate.