The Federal Reserve's Factory Production report shows a 0.8%, increase for December 2010 in Industrial Production. Here is a detailed report. This is after November showed a 0.3% increase. Look at the graphs and the actual reports from the Federal Reserve, not the press. Industrial Production is still below pre-recession levels.

At 94.9 percent of its 2007 average, total industrial production in December was 5.9 percent above its level of a year earlier.

The reason the numbers were as strong as they were was utilities, or energy. Think heating, oil and the weather.

For the fourth quarter as a whole, industrial production increased at an annual rate of 2.4 percent, a slower pace than in the earlier quarters of the year. In the manufacturing sector, output moved up 0.4 percent in December with gains in both durables and nondurables.

Below is the graph of raw capacity, indexed against 2007 output. This is just how much capacity does the U.S. have to make stuff. Look at how damn flat this is in terms of just raw facilities, potential to make stuff. Raw capacity is the underlying number by which utilization is calculated. 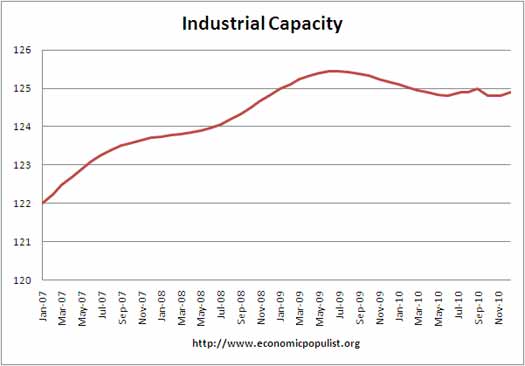 Below is the Federal Reserve graph for raw capacity and Industrial Production. Notice how at the start of 2000, when the China PNTR (trade agreement) kicked in, both literally level off to flat land. When I see this graph I think what has happened to American's industries is an absolute crime. 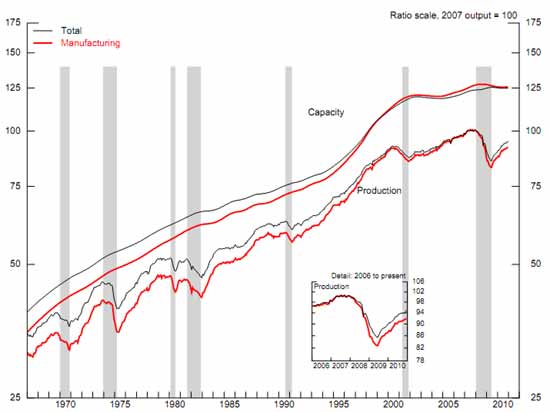 Before listing the monthly percentage changes of the market group, read these Q4 2010 details on consumer goods and business equipment from the report:

Below is another graph of industrial production since September 1990, indexed to that month. Look at the slope, the growth through the 1990's and then compare to 2000 decade. It was in 2000 when the China trade agreement kicked in and labor arbitrage of engineers, advanced R&D started. Here are some more details on industrial production categories (market groups) from the Federal Reserve's report:

There were a flurry of economic reports and it's hard for me to get to them all to show the corresponding graphs and highlight report details I think is important to us, those peanut gallery folk all of this macro economic data is affecting.

Any diligent graduate student out there who is interested in writing up a few? You can contact me and I'll show you how to find all of the data and make the graphs, use the Saint Louis FRED system, format the overview.