The Mortgage Monitor for January (pdf) from Black Knight Financial Services (BKFS, formerly LPS) reported that there were 659,237 home mortgages, or 1.30% of all mortgages outstanding, remaining in the foreclosure process at the end of January.  This was down from 688,672, or 1.37% of all active loans that were in foreclosure at the end of December, and down from 1.76% of all mortgages that were in foreclosure in January of last year.  These are homeowners who had a foreclosure notice served but whose homes had not yet been seized, and the January "foreclosure inventory" is now showing the lowest percentage of homes that were in the foreclosure process since the fall of 2007.   New foreclosure starts, which have been volatile from month to month, fell to 71,900 in January from 78,088 in December and from 93,280 in January a year ago, while they were still higher than the 66,626 foreclosure starts we saw in November, which had been the lowest since the crisis began.  Over the past year, new foreclosure starts have remained in a range about one-third higher than number of new foreclosures we we seeing in the precrisis year of 2005.

As those of you who've paid attention to the monthly changes in mortgages delinquencies know, there is a seasonal trend in delinquencies, as late housepayments usually increase before the Holidays as homeowners defer their mortgage payments in order to do Christmas shopping.  Then we normally see a large drop in mortgages delinquencies during January, February and March, as homeowners catch up on their bills.  Thus, a 6.62% increase in January mortgage delinquencies is unusual, as January usually sees a decrease of delinquent mortgages ranging from 2.4% to 3.1%.  To look at that increase closer, the graph from page 6 of this month's mortgage monitor we're including below divides into 4 types of mortgage delinquencies the number of mortgages that were farther behind in their mortgage payments than they were in the prior month for each month since 2005.  Those that were current in the prior month but became delinquent in the reporting month are shown in red; those that transitioned from one month late to two months late are shown in green; while those that transitioned from two months late to 3 months late are shown in violet.  Finally, of those who were more than 90 days delinquent in the prior month who were foreclosed on in each month is shown in blue.  Here we can see in red that over 580,000 home mortgages became newly delinquent in January, a 129,000 mortgage or 28% increase from those that became newly delinquent in December..  In addition, there was an increase of 21,000 mortgages, or 11% higher than in December, that rolled from 1 month late to 2 months behind on their housepayments, while 7,500 homeowners, or 7% more than those who had rolled from 2 months to 3 months late in December, have rolled to 3 months late in January.  Lastly, we can see in blue that the number of those who were seriously delinquent who were foreclosed on in January fell by about 7.8%, as our earlier coverage noted... 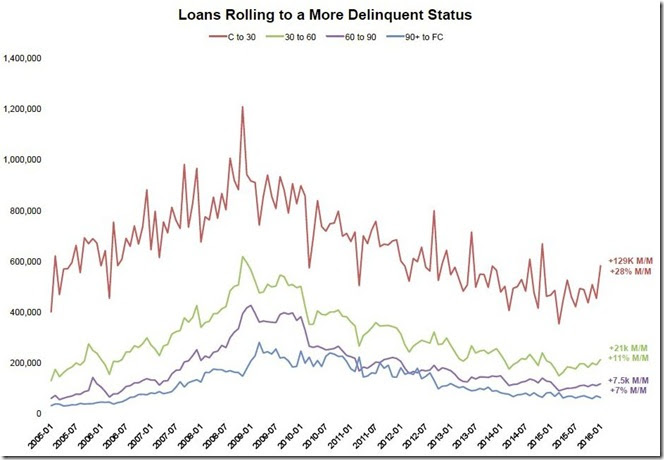 As you know, the Mortgage Monitor (pdf) is a mostly graphics presentation from what was once the Analytics division of Lender Processing Services that covers a variety of mortgage related issues each month.  One issue they looked at this month was the potential risk exposure that mortgage holders faced in three states where courts are deliberating how statutes of limitations laws should be applied to foreclosures.  As you should recall, tens of thousands of homeowners have been stuck in the foreclosure process for years because of the lengthy foreclosure pipelines and difficulty in establishing clear title and right to foreclose after the evisceration of public land records by MERS and the banks during the housing boom, and now courts in Florida, New Jersey and New York are deciding whether statutes of limitations laws should apply to severely delinquent mortgages in those states.  According to BKFS, up to 98,000 seriously delinquent home loans with an unpaid principal balance of approximately $30 billion may be subject to such statutes of limitations (ie, mortgages that are more than five years past due in Florida or more than six years past due in New Jersey and New York).  Moreover, roughly $1 out of every $10 of principal in private-label securitizations in these three states is tied to such a mortgage. 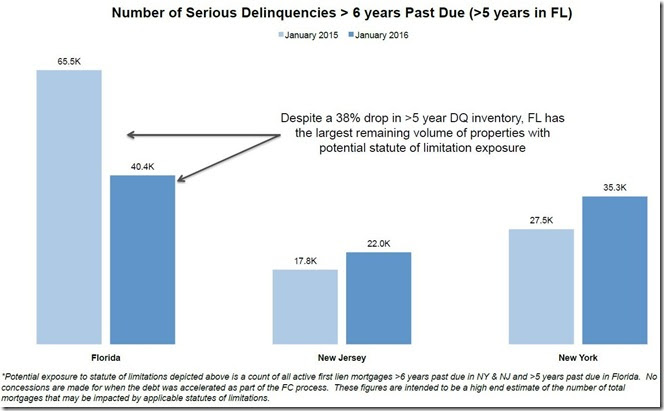 For a historical summary of those metrics, and the other data that we have discussed, we're including below that part of the Mortgage Monitor table showing the monthly count of active home mortgage loans and their delinquency status, which comes from the bottom part of page 18 of the pdf.  The columns in the table below show the total active mortgage loan count nationally for each month given, number of mortgages that were delinquent by more than 90 days but not yet in foreclosure, the monthly count of those mortgages that are in the foreclosure process (FC), the total non-current mortgages, including those that just missed one or two payments, and then the number of foreclosure starts for each month over the past year, and for each January shown going back to January 2005.  In the last two columns, we see the average length of time that those who have been more than 90 days delinquent have remained in their homes without foreclosure, and then the average number of days those in foreclosure have been stuck in that process because of the lengthy foreclosure pipeline. The average length of delinquency for those who have been more than 90 days delinquent without foreclosure has decreased from the April record of 536 days and is now at 495 days, while the average time for those who’ve been in foreclosure without a resolution has now dropped a bit its record high set in November but at 1047 days is still at an average of nearly three years. 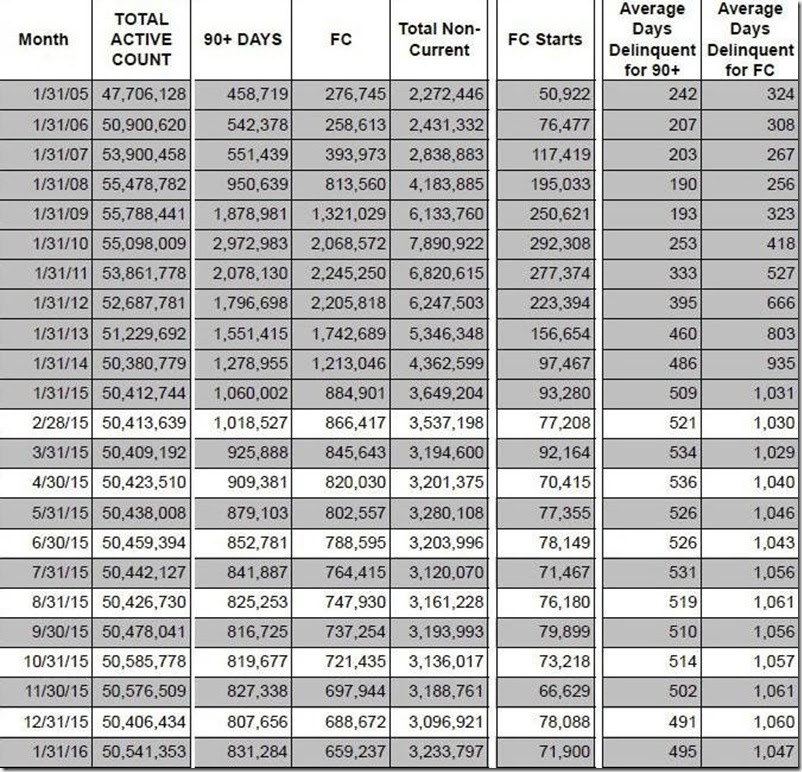 (Note: the above was excerpted from my post on Marketwatch 666)