The BLS JOLTS report, or Job Openings and Labor Turnover Survey describes the pathetic job market. Once again, little has changed, the never ending drum beat and mantra of our dead in the water labor market never ceases. The August 2012 statistics show there were 3.52 official unemployed persons for every position available*. There were 3.561 million job openings for August, a -0.9% decrease from the previous month of 3,593,000. Openings are still way below pre-recession levels of 4.7 million. Job openings have increased 63% from their August 2009 Mariana Trench trough, yet real hiring is a distant memory. There were 1.8 persons per job opening at the start of the recession, December 2007. The job market is horrific and worse than last month. Below is the graph of official unemployed, 12.088 million, per job opening. 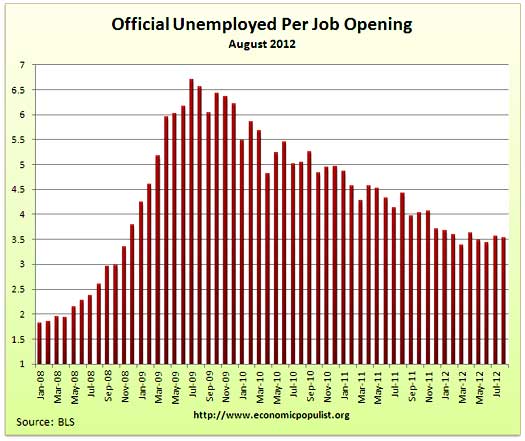 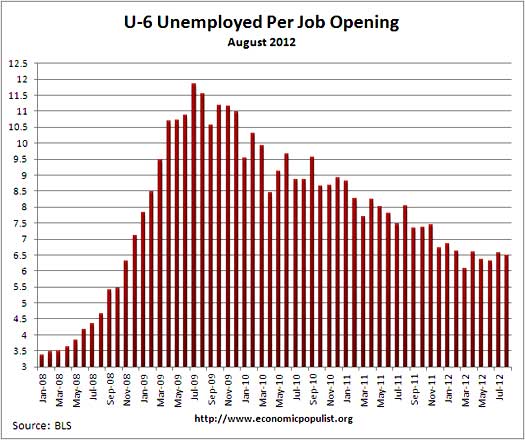 August hires were 4,390 million, an increase of 2.6% from the previous month. Since the July 2009 trough, actual hires per month have only increased 19%. This is simply terrible as an indicator for employers are clearly refusing to increase hiring, across the board. Below are total job separations, 4.354 million, a 6.5% increase from the previous month. The term separation means you're out of a job through a firing, layoff, quitting or retirement. Below is a graph of just layoffs and firings. We suspect this went down in September, still an increase to early recession levels is not a good sign. Every month the JOLTS report looks like employment musical chairs. We have an unchanged 1.8 million overall yearly net job gain even though time marches on.

Over the 12 months ending in August 2012, hires totaled 51.6 million and separations totaled 49.8 million, yielding a net employment gain of 1.8 million. These figures include workers who may have been hired and separated more than once during the year.

Graphed below are people who quit their jobs minus those who were fired and laid off. The lower the bar on the below graph, the worse labor conditions are. The number of quits were 2,.140 million for August and are still way below pre-recession levels of 2.8 million. People are clearly not voluntarily leaving their jobs because the job market is so bad, even though the jobs slaughter of 2009 where people were laid off and fired in mass appears to be over. The BLS was kind enough to make a credible Beveridge Curve graph, reprinted below. The Beveridge curve shows the official unemployment rate vs. the job openings rate, over time. If you see a bunch of data points to the far right, that's bad, it means there is long term unemployment and not enough jobs. Up and left in the Beveridge curve is good, it means there are jobs, people are getting hired, life is good. A right and up move in the Beveridge curve can indicate a skills mismatch. Look at how we're stuck to the right, but down, which means, pure and simple, there are not enough jobs and we're just not expanding enough for more jobs. The green, representing the 2009 time period, shows how fast we went to the right and the purple, which is 2010-2012, means we are stuck in job market malaise. Look at how the purple line just kind off flips back and forth down and to the right. That's our labor market spinning her wheels, stuck in the mud. 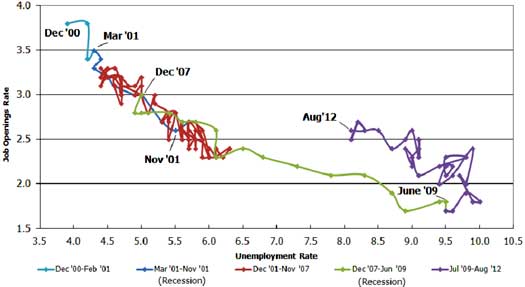 Awesome and truly unbelievable news, initial claims dive the most in 4 1/2 years right in time for VP debate. No, I'm not going conspiracy on this, but come on, these numbers will be revised up from 339,000 up to 370,000-380,000 next week. But no one looks at the revisions, except blogs and those who read them (guilty). What was last week's number, 367,000? Anyway, keep on popping the champagne govt. and Wall Street (actually, Wall Street's government), because even if these numbers were accurate in any way, the JOLTS numbers, jobs created (what was that, 119,000?), and miserable part-time, no benefits explosion is just more evidence we are suffering. 2012 and companies still find 300,000+ people somewhere to kick to the curb every week - that's brutal. So as Ayn Rand Fanboy and Joe "Wow, I'm a VP, look at me" Biden carry on and on about which one loves America more and who really looks out for the middle class while accepting donations from fat cat donors, we continue to witness our economic decline daily. When we see jobs that don't have 100+ applicants per opening, use a person's skills, experience, and degrees, and that could actually buy a house when combined with a spouse's income, then pop the Dom.

I wasn't planning on overviewing initial claims but looks good to write up something. It's volatile.