"As has been true for much of the nearly six-year-old recovery, hiring was strongest at the top and bottom of the pay scale. Overall, jobs at the extremes of the pay distribution — those where median pay falls in the top or bottom 20 percent of all occupations — have surpassed their prerecession peaks. Jobs in the middle 60 percent experienced slower growth and are still deep in negative territory ... Some economists have argued that longer-term forces, particularly automation and outsourcing, are having a polarizing effect on the job market, with high- and low-skilled jobs growing as those in the middle disappear."

Below is wage data from the Special Security Administration showing the median wage reported over a 24 year period from 1990 to 2013 (below that is a chart). 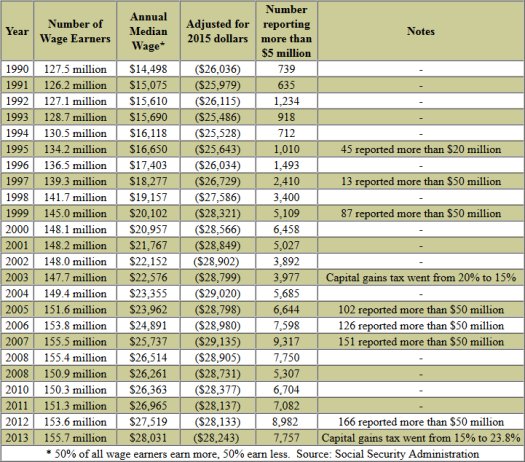 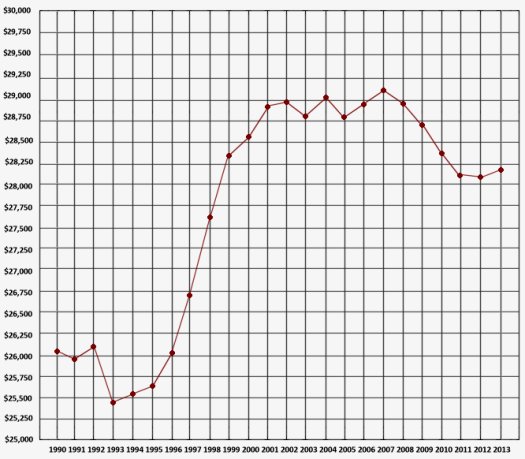 From the Century Foundation by Mike Cassidy on March 27, 2015: When Your Occupation Is Poverty:

A quarter of America’s workers are working full-time, year-round in occupations where they cannot expect to earn enough to keep a family of four above poverty. That’s just one troubling takeaway of the latest Occupational Employment Statistics (OES) report ... Released just once annually, it provides detailed estimates of employment and wages ... One finding should stand above the rest: the less-skilled segment of the job market is not a pretty place ... It’s not a question of being poor, it’s a question of by how much. All of the occupations on the list have annual median wages that fall at or below the poverty level for a family of four ($24,250) ... America’s most common occupations are also are among its worst paying ... 25 percent of the workforce (33.3 million people) have professions where median annual wages are below the poverty line for a family of four ... For the 45 million Americans who work in the nation’s lowest-paying occupations—a third of the workforce, wages are so low that, even if their spouse was also employed 30 hours a week in the same occupation, the two of them together still would not make enough money to keep themselves and two children above twice the poverty line.

Lee Kuan Yew, the first prime minister of Singapore (who recently died at age 91), made the economy his first priority in 1959. Back then, Singapore was a swamp, and even had to import its drinking water from Malaysia. Lee raised the per capita income of Singapore from $500 a year to some $55,182 a year today. Its average annual growth rate has averaged 7 percent since the 1970s.

We're always hearing about the growth of good-paying high-skilled jobs at the top. But when you compare those to the decline in middle-class jobs, and to the growth of low-paying jobs, it doesn't look all that great. BELOW: Job Polarization Visualized

Offshoring, technology, automation, robots — there just aren't enough jobs for everyone; especially those that pay a "living" or middle-class wage. BELOW: My prediction for the year 2030.

* NOTE: After most of the middle-class jobs disappear, then the number of low-paying jobs also begins to shrink as a share of the labor force — when more offshoring, technology, automation and robots displace domestic workers — when more and more people are left out of job market. READ: When Human Labor Becomes Obsolete.

St. Louis Fed on Job Polarization: "Postrecession policies to stimulate labor market activity may have little effect since the jobless recovery is due to the downturn-induced disappearance of middle-skilled jobs."
https://www.stlouisfed.org/Publications/Regional-Economist/January-2013/...

New York Fed on Job Polarization: "The economic forces driving job polarization have existed for decades and are likely to continue."
http://www.newyorkfed.org/research/current_issues/ci18-7.pdf

Kansas City Fed on Job Polarization: "Job polarization has occurred consistently over the past three decades, suggesting that it is an ongoing, structural phenomenon."
https://www.kansascityfed.org/publicat/econrev/pdf/13q1tuzemen-willis.pdf

The "per capita" income in the U.S. is about $53,042 (less than Singapore's ). "Per capita" means the "average" (not the "median"), so it is very misleading as it can be very skewed by higher-income earners at the very top. (Just as when the Bureau of Labor Statistics reports the "average" wage".) Sentier Research showed the annual "median household income" to be $54,010 (about the same as the "per capita" income) — but this also includes dual/multiple income earners per household. If you divide the "median household income" by 2, it is $27,005 — slightly less than the last reported "median wage" of $28,031 (where have earn less, and half earn more).