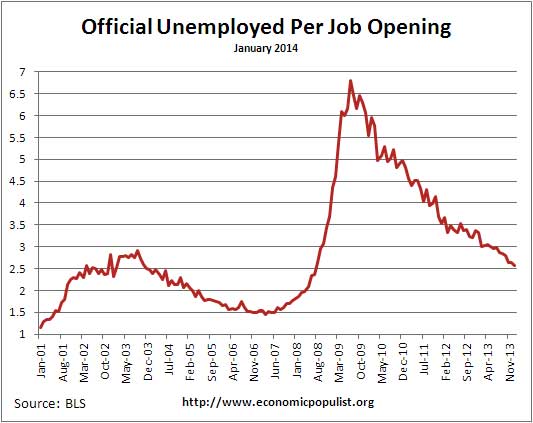 If one takes the U-6 broader measure of unemployment that includes people who are forced into part-time work and the marginally attached, the ratio is 5.1 people needing a job to each actual job opening.  In December 2007 this ratio was 3.2. 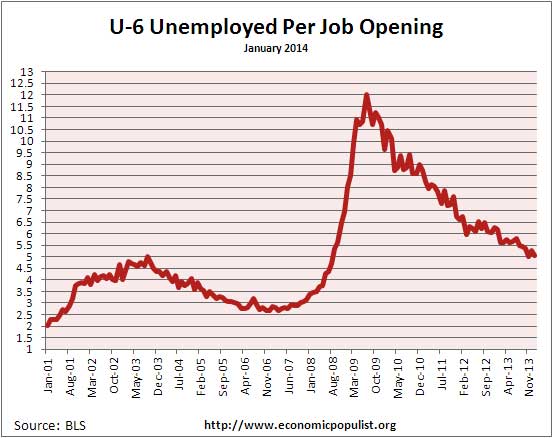 JOLTS reports any job opening, regardless of pay.  There is no information on the ratio of part-time openings to full-time ones.   Graphed below are raw job openings.  Job openings are still below the 4.7 to 4.3 million levels of 2007.  Currently job openings stand at 3,974,000.  This is in stark contrast to the 10.5 million official unemployed. Since the July 2009 trough, actual hires per month have only increased 24%.  This is simply terrible and the most important indicator in our view for employers are clearly refusing to increase hiring, across the board and thus not recover from our jobs crisis.  Businesses can say there are job openings, but if they do not hire an American and fill it, what's the point?  The truth is business are refusing to hire Americans and this is while profits are at roaring highs.  Below is the graph of actual hires, currently at 4,535,000, to show how flat line actual hiring really is. Graphed below are total job separations, currently at 4.452 million, and fairly static for the past year.  The term separation means you're out of a job through a firing, layoff, quitting or retirement. Layoffs and firings were 1.736 million.  Layoffs and firings have upticked 10% from a year ago.  Below is a graph of just layoffs and firings.  One can see from labor flows while businesses are not trashing their workforce so much, they are also not adding to their payrolls.  Labor flows means the way people are hired, stay at a job, quit, get fired, get another job and so on.  It is the overall flow of the labor market for as people are get jobs, they also lose them. Graphed below are openings, separations and hires levels, so we can compare the types of labor flows.   While layoffs have declined to pre-recession levels, it is the flat line hires (blue) that is the problem, beyond not enough job openings (red) for the unemployed.  There is simply not enough hiring going on to get people back to work.  Anyone who claims a labor shortage is also easily disproved by these figures.  A labor shortage would imply more job openings than unemployed available to fill them.

Graphed below are people who quit their jobs minus those who were fired and laid off.  The lower the bar on the below graph, the worse labor conditions are.   Workers quit their current jobs often to obtain better ones.  People feeling free enough to leave their current positions is considered a positive labor market sign. . Quit statistics are still way below pre-recession levels of 2.9 million.  This is another JOLTS statistic the press is trying to make it sound like the labor market is healthy.  Quits were 2.375 million, obviously not at pre-recession levels and the quits rate, the percentage of quits to employment is 1.7. Below is a graph of the quits to layoffs ratio, currently at 1.4.  This ratio of people who quit their jobs vs. those who were fired gives an indicator of worker churn as well as if there might be a shortage.  If the ratio is below 1.0, this means more people are being laid off and fired than people who quit.  When the ratio is much higher, this means more people quit their jobs and thus implies there is better opportunity elsewhere and workers feel free enough to move on to obtain those new better jobs.  The quits to fires ratio was 1.8 in 2006.  Here again we see a ratio that isn't really showing a healthy employment situation in America. For the year, from January 2013 to 2014, there was a gain of 2.2 million employed.  For 2013 the JOLTS statistics are fairly alarming in that hires are still way too low.  We also see hires very close to separations and this has been going on since 2001 and implies worker churn.  It is one thing to get a job, another to have that job a year later.  We also see low retirement figures from other separations.   From the JOLTS report:

Below is a graph of the annual hires, in red and separations, in blue.  We can see the incredible plunge in hires in 2009 and the beyond belief firings in 2008.  Yet we also see the labor market obviously has not recovered in 2013.  It's improved, but unfortunately JOLTS doesn't go back to when labor in this country was more respected and the job market healthy.  The United States has not had any assemblance of a good jobs market since 2000. 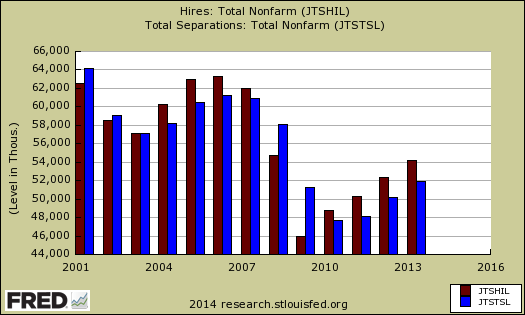 The BLS publishes a Beveridge Curve graph, reprinted below.   The Beveridge curve shows the official unemployment rate vs. the job openings rate, over time.   If you see a bunch of data points to the far right, that's bad, it means there is long term unemployment and not enough jobs.   Up and left in the Beveridge curve is good, it means there are jobs, people are getting hired, life is good.   A right and up move in the Beveridge curve can indicate a skills mismatch.   The green, representing the 2009 time period, shows how fast we went to the right.  The purple line is 2010-2014 still is not even back to the red, which was when the job market was deteriorating rapidly.  The left upwards portion of the graph which would indicate a healthy job market.  The red line, which wasn't that great of a labor market, is pre-recession.  The better news of this beveridge graph is showing just how far out the jobs market really went.  The graph also shows how fast the jobs market went bad and how slowly it has taken to recover even this much.  Short story long, the beveridge curve is still not a pretty picture. 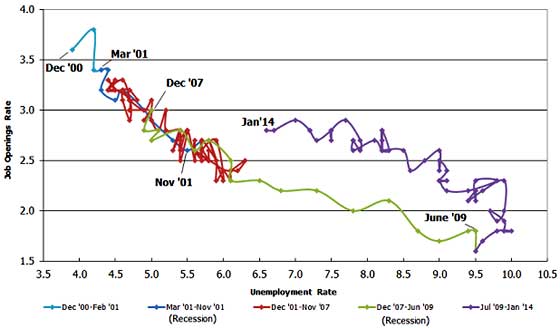 The January 2014 unemployment rate was 6.6%.  JOLTS includes part-time jobs and does not make a distinction between part-time, full-time openings.  A job opening reported to the survey could literally be take out the trash twice a week and be counted.  This is a shame, it would be nice to know a little more about the quality of these new opportunities.  Here are our past JOLTS overviews, unrevised.