In a significant setback for the plaintiffs, U.S. District Judge Naomi Reice Buchwald in Manhattan granted the banks' motion to dismiss federal antitrust claims and partially dismissed the plaintiffs' claims of commodities manipulation. She also dismissed racketeering and state-law claims.

Buchwald did allow a portion of the lawsuit to continue that claims the banks' alleged manipulation of Libor harmed traders who bet on interest rates.

Earlier Freddie Mac sued the banks for an undisclosed amount over rigging the LIBOR, which cost Freddie Mac and Fannie Mae over $3 billion as calculated in this study (pdf).   Some of the banks Freddie Mac sued are Bank of America Corp, JPMorgan Chase & Co, UBS AG and Credit Suisse Group AG.  Below is a graph of the LIBOR against the Federal Reserve Eurodollar deposit rate, or Fed Ed.  The two diverged, up to 3% in September 2008, as illustrated.  Barclays rate rigging cost thousands of businesses millions, as the LIBOR dictates interest payments on a slurry of holdings . 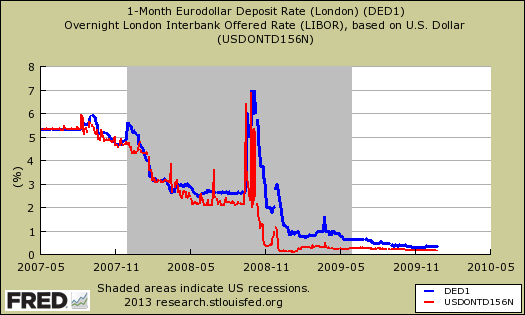 In spite of the massive losses and clear benchmark rate manipulations, the methods for calculating the LIBOR are still not fixed.

Libor ignored the crisis in Cyprus that’s roiling financial markets, showing the global benchmark for $300 trillion of securities remains divorced from reality six months after regulators laid out a plan to fix it.

The good news is legal fees just to cope with the flurry of lawsuits, plus the individual settlements are still costing the banks over $100 billion.

Big banks are paying dearly for their recent bad behavior: to the tune of $100 billion and counting, reports the Wall Street Journal. The top four US banks alone have paid $61.3 billion in financial crisis- and mortgage-related settlements over the past three years, and analysts don't expect the damages to end there. One expects another $24.7 billion to go toward mortgage lawsuits and at least $14 billion to be spent on other settlements.

This is in spite of the delays in repairing the LIBOR and conflicting regulations.  Australia just threw up their hands and plum said forget the LIBOR to determine interest rates and moved to market prices.

Australia will use prices displayed electronically by brokers and trading venues to set the price of the country’s benchmark interbank borrowing rate.

The Australian Financial Markets Association, which represents 130 Australian and international banks, brokers and fund managers, announced on Wednesday it would disband the panel used to set the bank bill swap rate.

Britain just issued new rules for calculating the LIBOR, but surprise not, compliance to the new rules are voluntary.

Regulators across the world are watching to see how the Financial Services Authority's (FSA) rules, due to come into force next month, will work out.

The European Union is considering whether to force banks to help compile Euribor, Europe's counterpart to the London Interbank Offered Rate (Libor), to safeguard its integrity.

Banks including Dutch lender Rabobank, Switzerland's UBS (UBSN.VX) and U.S.-based Citigroup (C.N) have said they no longer wanted to participate in the Euribor-setting process.

Regulators worry that if too many banks drop out, the quotes banks submit would become unrepresentative and the benchmark rate could be easily manipulated.

Banks submit an estimate of the rate at which they think they could borrow from another bank and these quotes are used to compile the benchmark.

The FSA, which put the issue of compulsory participation to banks last December, said on Monday it was still considering the feedback.

As usual, we have a financial scandal, accompanied by billions in losses.  Lawsuits then ensue but are dismissed, delayed and dropped.  Regulators flurry to set new rules, which then are watered down or not enforced as the public forgets what even happened.  After the dust has cleared and rate rigging goes to the scandal dust heap of distant memory, banks go about their usual practice of doing whatever the hell they want to.

The whole show seems to be about money transfer to the banks, sucked out of the pockets of regular people and sovereign nations.  To that end, the deposit seizure is Cyprus is much larger than originally estimated.  How much?  Instead of the reported 13% estimate, depositors with more than €100,000 will lose over 60% of their deposits at the bank of Cyprus.  Banks do what they want, the rest of the globe be damned.

Read this (from Bloomberg): "Explaining her decision to dismiss the claims after the regulatory settlements, Buchwald said private cases must be 'examined closely' to ensure plaintiffs are “properly entitled to recover and that the suit is, in fact, serving the public purposes.”

“The broad public interests behind the statutes invoked here, such as integrity of the markets and competition, are being addressed by ongoing governmental enforcement,' she said."

Apparently this clown thinks as long as the government that is controlled by the banks and takes their donations is pretending to do something about it or settles for a miniscule % of the money stolen, then private lawsuits are somehow preempted everywhere? Never heard of all lawsuits being preempted because some federal agency might someday be pursuing some action or cuts a deal without consulting all the injured parties for a tiny portion of the public and private losses, but then again the rules and laws are constantly being reinterpreted to aid the elite.

When you can't rely on plain meanings of laws and they are arbitrarily enforced to the detriment of the majority of citizens, why should they be held as the law of the land anymore? Did she not read where the DOJ isn't going to prosecute big banks per Holder? Hey, Judge, the Feds explicitly said they weren't going to pursue legal actions against certain banks - that only leaves lawsuits brought by other parties, understand? That's the only recourse to protect the public. And now those aren't allowed?

By the way, she was in the US Attorney's Office for the SDNY (bankster central and a complete lack of enforcement against bankster cartels throughout history). Given her logical skills, can't wait to discover what wonders she worked as a prosecutor. No surprise - she played the game, got rewarded with a judgeship (as others are rewarded by becoming partners in big law firms defending the very same banks), and now will return the favor.

Come on, as if anyone needs further evidence of revolving door crap, the SDNY Judge that dismissed the case was a SDNY Assistant US Attorney and so was her husband. And to prove the point that in return for non-prosecution of banksters during their terms they get judgeships or become big law firm partners, we have her becoming a federal judge and her husband now a partner in a big bankster defending law firm! Awesome! Any doubt now how our justice system works? Here it is, from his big law firm's (yes, he works in the SDNY) website:

Banksters being defended by former SDNY Assistant US Attorneys? And a wife as a federal judge in the same district? No way! Shocking!
I wonder why she didn't recuse herself? I hope the 2nd Circuit tears her a new one and there's an investigation. Come on, at least pretend justice is blind and determined on the law, not bullsh*t public policy grounds that everyone knows are a last resort when the fix is in.
Come on, the 99% also have skills, experience, and education. Just because we don't step on other people or crave wealth above all else in life, doesn't mean we don't know what's going on and have the skills and experience to start righting the wrongs you have imposed on us. You have the corruption, we have the numbers and skills. The 99% want our country back because we're sick of seeing criminals and corrupt idiots sell us out and destroy what took 200+ years to build. Enjoy.

Banks acting in collusion to manipulate a key interest rate certainly sounds like anti-trust, but I am not an attorney, legal expert. I will email Bloomberg law and ask that they cover the ruling in detail. They are solidly objective usually. These connections being dug up are pretty astounding, no doubt about it, but I want to hear it from the legal experts if this ruling is bogus.

These connections are easy to spot. It's all out there in plain sight. And they get mighty pissed if they ever get asked about it. All in huff, "How dare you question, blah blah."
Well, here's the federal standard for recusal: "[a]ny justice, judge or magistrate of the United States shall disqualify himself in any proceeding in which his impartiality might reasonably be questioned."

With that, how is it even possible for the SDNY Judge with a husband that admits to currently or recently representing big banks in antitrust issues able to seriously sit on a case dealing with big banks on any issue, let alone LIBOR fixing (an antitrust and fraud issue) in the very same district in which he is based and represents clients? Was every other SDNY Judge somehow unavailable? Really?

SDNY bankster capital of the world and look how few prosecutions stem from that office. What are they up to exactly? Why earn all that $? Why are they worth so much as private attorneys if they never actually went to trial on big cases? Connections or their mad trial skills when 95+% of their cases plead out. Hmmm, let's think about it.

Why the title. More and more picking the pockets of individuals and local, state, federal, global governments by the banks is endorsed. That's our theme here, it's ok to take people's money as long as you are not another bank. Look at Europe, they needed to nationalize the banks, wipe out all of the debt and reset, instead they sent an entire continent pretty much economy into the tank, all to "save" the banks.

I learned an important lesson about New York banks, New York agencies, and other NY things a 2 years back when my contract with NYC was corruptly substituted for a more expensive contract involving a consultant who had appropriately greased the palms of international consulting frims. My measly $60/hr contract was subustituted for a contract starting at a base of $75/hr by
a former consultant (whose skills were less but whose connections were mighty). This international consulting firm is an icon of U.S. Technology.

The intermediary firm between the Tech Icon company would gain the $15/hour difference between my rate goes to the India-in-US firms hired by Global_Tech. For the TaxPayers of NYC, they will continue to pay $225/hr or
$450K/annum. The difference of the $15 goes to a corrupt, incompetent Indian slimeball which NYC refuses to remove, knowing fully his degree of corruption. Complaints to NY agencies,
would you believe, go nowhere.