There are a host of claims out there on part-time work, including this one which claims 96% of all jobs in 2013 are part-time.  Is this really true?  There is no doubt people forced into part-time hours for economic reasons has dramatically increased, as we show every month in our unemployment overview and reproduce below. The BLS has multiple categories of part-time work.  The ones most quoted are those where for that week the monthly employment survey was taken, the person worked less than 35 hours.  There is another statistic which gives what the person is usually employed as, in other words, is the job really part-time or full-time as a rule?

This is one reason why the numbers don't add to the total employed.  One can have a full-time job yet one week only work part-time.  Additionally, when businesses cut back on hours, employees who are full-time and have their hours cut down and they too worked only part-time for the employment survey reference week.  People who got their hours cut due to business being slow are referred to as part-time workers due to slack working conditions.  To make matters worse, there are seasonal adjustments unique for each of these BLS data series, so they don't always add up to the other totals, which are also seasonally adjusted, but independently so.

Bottom line, if a job is only bringing home a paycheck for 34 hours or less when one needs 40 hours worth of pay it's a bad deal.  Yet trying to claim the only jobs created are part-time ones just isn't true.  So, how do we get a real tally of how many part-time jobs are being created versus full time ones?

First, one must look at the CPS survey, not the payrolls or jobs reported to compare full-time and part-time jobs.  We also need to remove seasonal adjustments and just use raw figures.  Second, one needs to realize there are annual Census population adjustments added to the month of January and see this article on those details.

We can take an annual figure and get a rough ball park idea on the percentage of new employment that is truly part-time.  By taking annual figures, the population controls and seasonality of employment even themselves out.

Below is a graph of people employed in official part-time jobs as a percentage of the total employed and this is calculated annually in order to use not seasonally adjusted data and address the annual population controls.  As we can see, the percentage for 2012 was 19.4% and has ballooned since 2008.  One is not seeing a reaction to Obamacare with this spike up.  Instead what we have is the great recession and employers are only offering part-time work because they can.  Unemployment is so great, there is a huge oversupply of labor and still weak economic demand. 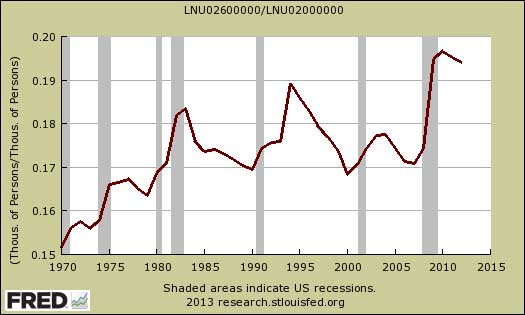 Below is a graph of the percent change annual in the ratio of those working part-time hours to the total employed.  Notice, how this increase matches up with those gray bars in the graph.  Those gray bars indicate recessions and this is why we know the dramatic increase in part-time work is due to the economy.  If it was truly Obamacare we would see another spike separate from these which match the recessions. 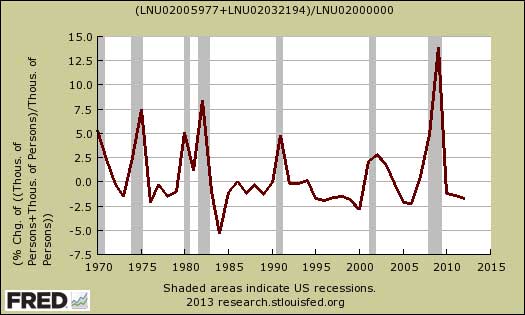 Ain't statistics grand?  Folks, we have to understand the methods and assumptions behind government statistics before one can scream foul.  Trust us, the United States employment situation stinks, yet making claims based on misunderstanding government statistics stinks worse.  False claims hide the fact yes indeed, the American work force is in the crapper.