Some are stuck in part-time because their hours were cut by their employer. These part-timers due to slack work now number 5,147,000, a decline of 40 thousand from last month. Below is a graph of forced part-time because they got their hours cut as a percentage of the total employed. If you want to see a recession economic indicator, this looks like a pretty damn strong one. See how closely the percentage increase matches recessions, the gray bars? The percentage of people in part-time jobs due to slack economic conditions has stayed extremely high since the start of the Great Recession, even while declining. Take it as an indicator of how much the American worker is still on the edge. U-6 is a broader measure of unemployment, includes the official unemployed, people stuck in part-time jobs and a subgroup not counted in the labor force but are available for work and looked in the last 12 months. U-6 has also remained consistently high. In May U-6 was 14.8%, up from April's 14.5%. The real number of people wanting a job for April is 27.11 million, over double the official counted as unemployed of 12.72 million. One needs to add up the official unemployed, people stuck in part-time who need full-time jobs, and all of those people not in the labor force, but who report they actually want a job, currently at 6.29 million. 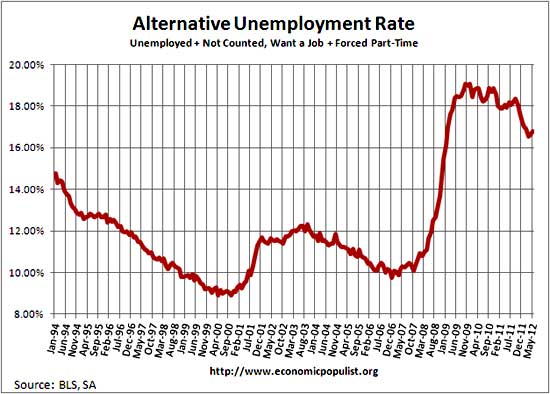 A final area of contention is figuring out how many jobs are needed each month to keep up with population growth. Seems many in the press just throw out a number. We just don't know due to civilian non-institutional population fluctuation. We do know that overall population monthly growth has been hovering around 200,000 a month, this month the change was 182,000. We also know the civilian non-institutional population is roughly 75% of the total population. We also know the labor participation rates and employment to population ratios are artificially low. Therefore, it's safe to say we need about 100,000 jobs per month to keep up with population growth at these same labor participation rates. The Atlanta Fed got sick of the debate it seems and put up a monthly jobs calculator. As we can see payrolls are simply not even keeping up with population growth, never mind rehiring the millions who need work.