On The Economic Populist you might have noticed the middle column. We try to list other sites and blogs who have exceptional insight and writing on what is happening in the U.S. economy.

Just because everyone says it's so, doesn't mean it is....a premise amplified in the The Crisis Won't Get Moving. From the impending European Crisis to similar observations made here in this post on residential real estate, things are not all over as one is led to believe in the Financial Crisis. Oh yeah, what was that about Financial reforms and effective action?

Baseline Scenario asks if Geithner is paying any attention to the global economy. Yes, the sudden stock market crash was not because of the unemployment report, it's about Greece.

How the Volcker Rule misses the Shadow Banking System, on Naked Capitalism. (Not really sure if that circuit analogy works, uh, how about some diodes and transformers in there as an metaphor for Glass-Steagall, I'm sure everyone will understand that), but it has a few Venn Diagrams on where the shadow banking system resides and also notes, the Senate is doing their damnedest to make sure nothing passed and thus we can re-experience another crisis very soon.

Ralph Gomory has written another policy piece, A Time for Action: Jobs, Prosperity and National Goals. Gomory has some fantastic policy proposals and he has testified before Congress many times. It's it awful to see such bright minds work so hard to only have Congress blow off the recommendations of so many experts and instead pass some corporate lobbyist written bill?

I don't know if this this post is a must read, for we have certainly been covering this. But the New York Times has the graph (which I believe was originally created by a blogger somewhere) which compares unemployment in past recessions to this one. 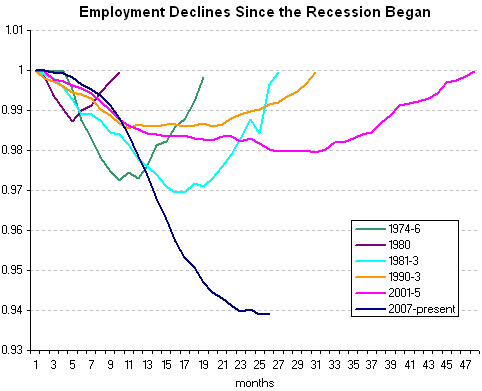