G.E., yes that G.E. who is in the White House, not only hasn't paid taxes for the last three years, our government actually paid them. From 2008-2010, G.E. received tax rebates of $4.737 billion, while earning a pretax profit of $10.46 billion. This is while they offshore outsource jobs to China and get bail outs for their financial branch, G.E. Capital.

Citizens for Tax Justice have published a new study, Corporate Taxpayers & Corporate Tax Dodgers, 2008-2010, which is simply a must read for every American. Some of the most notorious multinational corporations, complete with bail outs and offshore outsourcing your job, paid negative taxes for the last three years. In other words, we paid them.

The study covers 280 corporations. Some of what they found:

Below is a table from the report, showing the top worst offenders, their pretax profits, their tax or rebate and their effective tax rate. 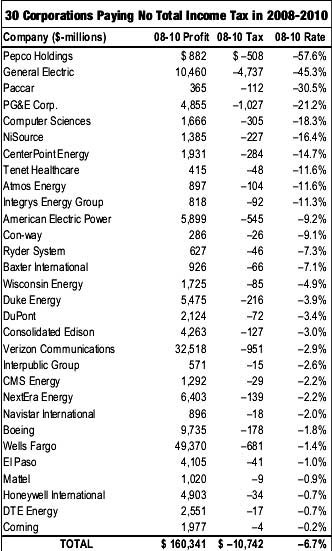 How could this be?   Even worse, how can one corporation pay over 30% in taxes yet another get a rebate?  There are certain tax breaks, not only in the U.S. corporate tax code, but globally, which hordes of CPAs and international tax attorneys study for optimization and then corporations act accordingly to take advantage of them. Accelerated depreciation, stock options, industry-specific tax breaks are such a few of the methods used to not pay Uncle Sam. One of my favorites is offshore tax sheltering in order to not pay taxes. From the report on offshore tax shelters:

Over the past decade or so, corporations and their accounting firms have become increasingly aggressive in seeking ways to shift their U.S. profits, on paper, into offshore tax havens, in order to avoid their U.S. tax obligations. These typically involve various artificial transactions between U.S. corporations and their foreign subsidiaries, in which revenues are shifted to low- or no-tax jurisdictions (where they are not actually doing any business), while deductions are created in the United States.16 Some companies have gone so far as to renounce their U.S. "citizenship” and reincorporate in Bermuda or other tax-haven countries to facilitate tax-sheltering.

Remember how Congress just passed a trade deal with Panama which puts their tax havens out of reach of U.S. law? If only Congress and this administration would pass such favors for the U.S. middle class.

The report notes how anti-competitive the current tax code is, not because of the official high rate, but more because of tax breaks and moving capital (along with jobs often) around the globe. Multinationals, Fortune 500's can play games and even get tax rebates, as we see, while smaller corporations and even some larger ones are paying their taxes. Such disparities automatically puts competitors in the same business sector at a disadvantage.

The report's list of tax dodgers, or those corporations who received the most tax breaks, subsidies, is below. Think about this list the next time you see your Wells Fargo credit card with a 22% interest rate while your FICO score is 750.

The report goes into much more detail and explanation of how this could be. We suggest you read it. The next time you hear how corporate taxes needed to be lowered, reference this report.

But how, exactly, do they do this? Here's a quick look at the 4 biggest loopholes corporations use to get out of paying taxes

you need to get an account, register and have a discussion.