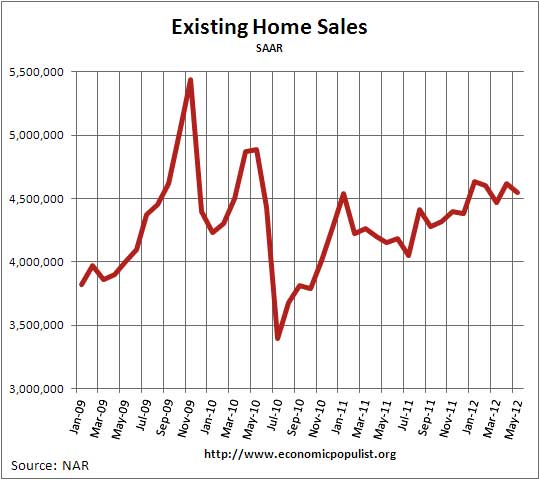 Total existing-home sales, which are completed transactions that include single-family homes, townhomes, condominiums and co-ops, declined 1.5 percent to a seasonally adjusted annual rate of 4.55 million in May from 4.62 million in April, but are 9.6 percent above the 4.15 million-unit pace in May 2011.

Believe it or not, NAR claims the slight decline in existing home sales to a lack of inventory, yet they blame the decline more on cheap inventory, in other words, foreclosures and short sales. Here are the quoted inventory statistics:

Total housing inventory at the end of May slipped 0.4 percent to 2.49 million existing homes available for sale, which represents a 6.6-month supply at the current sales pace; there was a 6.5-month supply in April. Listed inventory is 20.4 percent below a year ago when there was a 9.1-month supply. Unsold inventory has trended down from a record 4.04 million in July 2007; supplies reached a cyclical peak of 12.1 months in July 2010.

Here we can see it is possible there were less foreclosures for sale, or is it simply a lack of buyers?

Notice in the below paragraph the decline in all cash buyers and investor buyers.

The median sales price for existing homes is now $182,600 and up 7.9% from a year ago. The median price can also be pushed up by less low end foreclose sales.

Calculated Risk has some commentary on existing home sales inventory.

Important: The NAR reports active listings, and although there is some variability across the country in what is considered active, most "contingent short sales" are not included. "Contingent short sales" are strange listings since the listings were frequently NEVER on the market (they were listed as contingent), and they hang around for a long time - they are probably more closely related to shadow inventory than active inventory. However when we compare inventory to 2005, we need to remember there were no "short sale contingent" listings in 2005. In the areas I track, the number of "short sale contingent" listings is also down sharply year-over-year.

Finally we have a graph on existing home sales to foreigners, up 25% from one year ago and more than double from 5 years ago.