The National Association of Realtors released their existing home sales figures and give a July decrease of -3.5%, annualized rate, from June. The yearly increase is a statistically anomaly and Calculated Risk reports Benchmark revisions due out this fall, should be significantly downward. 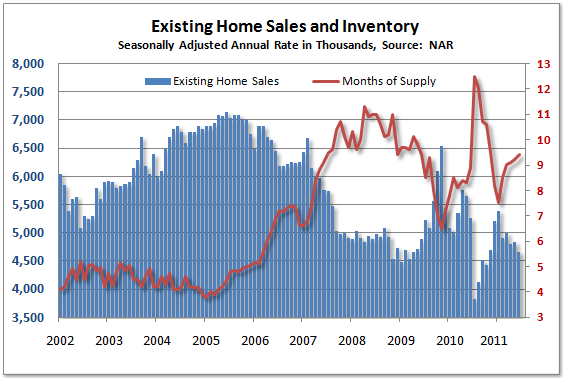 Total existing-home sales, which are completed transactions that include single-family, townhomes, condominiums and co-ops, fell 3.5 percent to a seasonally adjusted annual rate of 4.67 million in July from 4.84 million in June, but are 21.0 percent above the 3.86 million unit pace in July 2010, which was a cyclical low immediately following the expiration of the home buyer tax credit.

Fannie Mae just announced mortages rates are their lowest in over 50 years:

This means people are picking up foreclosures, short sales at so called bargain prices. First time home buyers were only 32% of all home sales.