The January personal income and outlays report is horrific.  Personal Income nose dived -3.6% from December and hasn't seen this big of a monthly drop since January 1993.  That's 20 years ago.  The blame is being laid on the payroll tax holiday expiration and December did see a rise in personal income also not seen since December 2004.  Disposable income is worse.   DPI dropped -4.0%, even when adjusted for inflation.  The below graph shows the monthly percentage change of personal income going back to 1990.   Ouch! 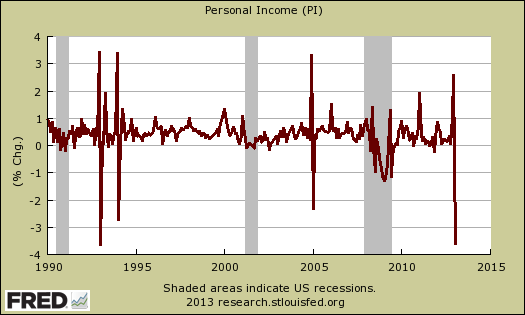 Consumer spending encompasses things like housing, health care, food and gas in addition to cars and smartphones. In other words, most of PCE is most about paying for basic living necessities. Graphed below is the overall real PCE monthly percentage change.  January is the first month for Q1, so the  real PCE flat line doesn't bode well as a first sign of Q1 economic growth. Health care, for example, is a service.  Gasoline is a nondurable good.  Cars are a durable good and January's decline was due to less purchases of motor vehicles & parts.  When people are cutting back on their spending, durable goods are usually the first things to go, especially large ticket items.

The PCE price index is used to remove inflation from consumer spending and income, reported above.  The price index was essentially 0%, for January and is up 1.2% from a year ago.  Energy alone decreased -1.9% has increased 0.1% from a year ago.  Don't expect this to last as gas prices are skyrocketing.  Minus energy and food, the price index increased 0.1% and is up 1.4% from this time last year.  While the PCE price index represents inflation, it is different from CPI.  Food prices had no change for January.

Personal income is the total for everybody in the United States who is reported and not part of the underground economy.  Below is personal income, not adjusted for inflation, or price changes.  Notice the plunge. Disposable income is what is left over after taxes. DPI (disposable income), plunged -4.0% from last month.  DPI adjusted for inflation (see the price indexes above), decreased -4.0%, from the previous month.   These numbers are aggregates, which includes income of the uber-rich, or the 1% of the population, as they are now called.  Below is DPI by levels and we can see this month's drop set the U.S. back to April 2012 levels. Personal receipts, income on assets, plunged by –17.8%.  This is income from non-incorporated businesses, such as the self-employed.  Dividend income, part of income on assets cliff dove –34.8% for the month, interest income, –0.3%.   The plunge in assets is due to accelerated reporting and changes in the tax rates.  In other words, the fiscal cliff deal to raise income taxes is what affected these monthly percentage changes.  From the BEA:

The level of personal dividend income was reduced $81.0 billion in January (at an annual rate), after a boost of $291.0 billion in December, reflecting accelerated and special dividend distributions paid in December; these adjustments reflected the impact of expected changes to individual income tax rates.

Below is a graph of dividend income on assets. 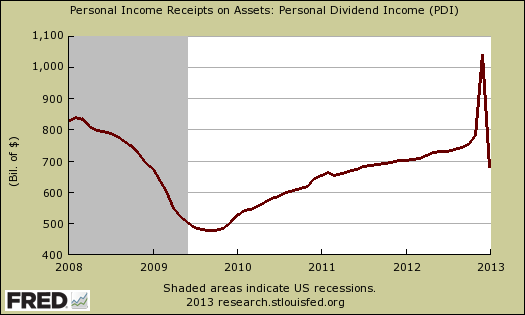 Below is adjusted for inflation personal income minus personal current transfer receipts.  This graph shows how much personal income increased that wasn't funded by the government and is used as a recession indicator as show in the below graph with the gray bars indicating recessions.  Transfer receipts are payments from the government to individuals where no actual services (work) was performed.  This includes social security, unemployment insurance, welfare, veterans benefits, Medicaid, Medicare and so on. Transfer receipts monthly change was 0.3%, not adjusted for inflation.   Below is a graph of just transfer receipts.  January is when cost of living increases take effect, yet what "recalculation" was done is unknown.

Personal current transfer receipts increased $7.0 billion in January, compared with an increase of $20.7 billion in December. The January estimates of current transfer receipts reflected 1.7-percent cost-of-living adjustments to social security benefits and to several other federal transfer payment programs; together, these changes added $15.2 billion to the January increase. The January change in social security benefits to persons was reduced by lump-sum payments, which had added $7.0 billion to December; these benefit payments resulted from a recalculation of the earnings base underlying the benefits for recent retirees. Personal savings is disposable income minus outlays, or consumption and not adjusted for inflation. The Personal Savings Rate was 2.4% in January, clearly hammered by the decline in DPI. Taxes collected on person income decreased  but it appears the reason was an accelerated estimate in December assuming no deal on the fiscal cliff happened.  Thanks Congress.  From the BEA report:

Personal current taxes decreased $14.0 billion in January, in contrast to an increase of $27.6 billion in December.  The January change reflected additional taxes paid on accelerated income distributions in December.  Payments of final settlements and back taxes less refunds in Federal net nonwithheld income taxes reduced the January change by $3.4 billion, based on the Office of Tax Analysis projections.  Indexation provisions of current tax law reduced federal withheld income taxes by $1.4 billion in January. Finally, here is the biggest reason for January's income plunge, expiration of the payroll tax holiday.  Payroll taxes on the employee side are for social security and were temporarily reduced as a  stimulative tax cut and were allowed to expire as part of the fiscal cliff deal in December.   As a result, these contributions to social security and Medicare, taken out of your paycheck,  increased 13.1% as a monthly percentage change.  Even though workers are paying into retirement benefits, they are perceived as taxes and subtracted from income.

Below is a graph of this increase and we can see the temporarily payroll tax holiday and it's expiration.   We also got hit with Obamacare and a Medicare premium increase. 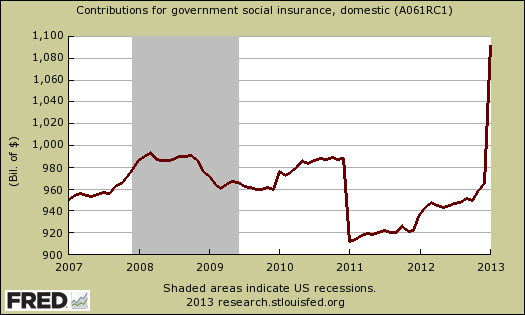 Next time you hear social security is running out of money, take note of the $132.8 billion  just collected.  From the BEA: