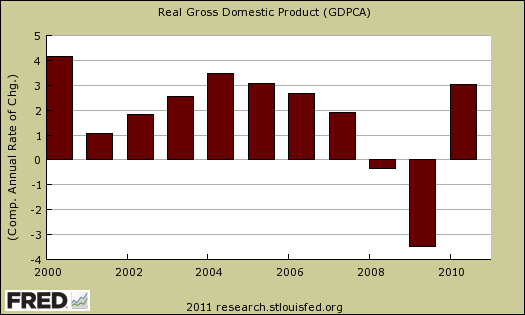 Even more amusing is the never ending belief that something just magically happens down the road and unemployment returns to 5%. Case in point is this amusing CBO graph below with it's magical unemployment rate decline cliff. While the horizon is always pushed further and further down the path, magically the sun comes up in some dramatic fashion in some nebulous future time. 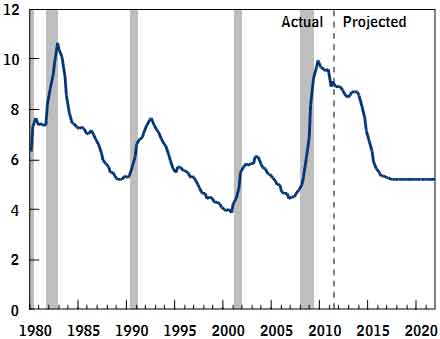 Beyond the sudden decline in the unemployment rate for 2016 by causes undetermined, the CBO has more dire projects on actual GDP growth, yet guess what, the below CBO GDP projections are on the high side.

CBO expects that the recovery will continue but that real (inflation-adjusted) GDP will stay well below the economy’s potential — a level that corresponds to a high rate of use of labor and capital—for several years. On the basis of
economic data available through early July, when the agency initially completed its economic forecast, CBO projects that real GDP will increase by 2.3 percent this year and by 2.7 percent next year. Under current law, federal tax and spending policies will impose substantial restraint on the economy in 2013, so CBO projects that economic growth will slow that year before picking up again, averaging 3.6 percent per year from 2013 through 2016.

IHS insight updated their employment projections for metro areas. It's bleak, with 48% of all U.S. metro areas still having an unemployment rate above 8% by the end of 2012. One in eight cities will have no job growth at all until 2021. 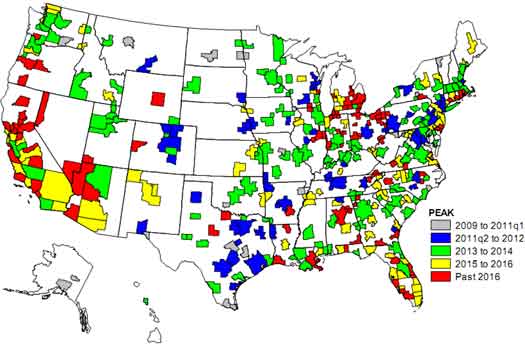 States as a whole are not much better according to IHS Global Insight with some states not returning to pre-recession unemployment levels until 2017. 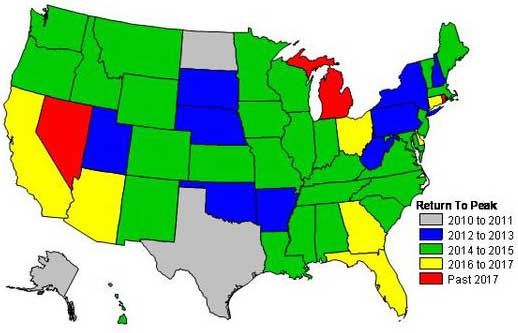 Double-digit unemployment remains in 103 of our nation's metropolitan areas and will continue to plague almost 70 by the close of 2012. What is even more startling is that for almost 50 metropolitan areas this will be a lost decade, as the effects of the recent recession will linger on through or even beyond 2020.

Now that it's clear America isn't getting any real jobs anytime soon, we also have bleak economic growth assessments across the board. Mark Zandi came out with a GDP at 2% annualized over Q3, Q4 2011 and 3% annual GDP growth for 2012. Barry Ritholtz notes Zandi's track record isn't so great, although the same can be said about the CBO, the Federal Reserve and assuredly the President's economics team. That said, most private forecasting divisions are much lower in their future GDP estimates.

Clearly the consensus for economic growth for 2011 is single digit nothingness with 2012 not looking much better. While many are worried about a double dip the truth is the U.S. economy had a heart attack and is lying cold, flat lined.

As a multiplier, real annualized GDP quarterly growth usually needs to be above 2.5% in order to generate jobs. What we have is a great consensus of a stagnant economy for the foreseeable future.

Bear in mind the BEA publishes real quarterly GDP at annualized rates, so one can compare say 2010 to Q2 2011 for apples to apples growth, or lack thereof.

(Even Fourth Party is looking up!)

Sometimes I think I am just an old ostrich with my head plunged into the sand. Does it make me a 'conservative' to view all tendencies toward increasing social instability with skepticism and suspicion?

I just can't believe that WSJ editorial page recently featured a piece (25 August 2011) using a Marxist term like "prerevolutionary" to describe a period of time, especially when that period of time is the present.

This is political news, I suppose, but it seems to me to be of some legitimate interest in a reality-based econometrics site like EP, especially since the two authors of the WSJ opinion piece are both known as pollsters.

I refer to "Expect a Third-Party Candidate in 2012" by Patrick H. Caddell and Douglas E. Schoen.

Caddell and Schoen have previously published jointly, notably in the Washington Post. Caddell is well established as a political consultant and pollster, was pollster for President Jimmy Carter and is currently known as the "Fox News Democrat." Schoen was polster for President Bill Clinton, well known as a pollster, political analyst, author and commentator.

Here are some excerpts taken, for review purposes, from the WSJ opinion piece --

The United States is in the midst of what we would both call a prerevolutionary moment ....

.... Rasmussen Reports poll conducted earlier this month found that "just 17% of likely U.S. voters think that the federal government today has the consent of the governed," while an extraordinary 69% "believe the government does not have that consent."

What's more, a poll of 1,000 Americans conducted by Douglas E. Schoen LLC in April found that a solid majority of Americans are now looking for alternatives to the two-party system ....

In line with these findings, 52% of all respondents in a May Gallup poll said there is a need for a third party, and for the first time in Gallup's history, a majority of Republicans embraced the idea. In a June Rasmussen poll, 30% of respondents said they would consider voting for a third-party candidate for president in 2012.

We already see evidence on the ground  ....  Look no further than the recent launch of the centrist, bipartisan, Americans Elect ,,,, selecting a third presidential ticket, via an Internet convention, that will be on the ballot in 2012.
....

The political order as we know it is deteriorating and disintegrating, and politics abhors a vacuum.

Video linked at WSJ discusses that, despite polls showing low (44%) approval rating of Obama by the public, the President polls well against ALL Republican contenders admitted into the running by corporate media. (WSJ interview of Alyssia Finley, Assistant Editor, OpinionJournal.com)

FRED graph one, tells everything you need to know, 3% growth 2011 ain't gonna happen. So if you can't get it right one year out, what's the point of a seven year forecast? These are numbers the models project, I know. Maybe it's time to adjust the models. When was the last time FRED underestimated GDP? They always seem to lower GDP numbers well after it's relevant.

I think you are reading it wrong. FRED is simply the St. Louis Federal Reserve research arm's graphing tool and maintained updated economic data sets. they are simply offering up easy graphing and data manipulation tools from statistics that are released by other government statistical branches. Their numbers are fine and in this case, the releasing statistical agency is the BEA, who is under the U.S. Department of Commerce.

The above graph is annual and just goes out to 2010 since I do the quarterly graphs in GDP and have that linked up. Quarterly real GDP is annualized, just so you can compare the performance of a particular quarter against the annual results from the previous year.

The actual data revisions, released by the BEA, well anything going back even a year it's understood how it can be revised, for one, they have their own price deflators, dealing with imports/exports and those really can change.

The link explains more of what the BEA had to say as to why they revised down so harshly PCE for years.

I use the FRED system because it's so awesome, easy to use and is way faster than creating graphs in Excel, uploading, optimizing and so on.

Here is the below Equation for annualizing data, for quarters, where raw data is in months, using monthly PCE as an example:

When calculating for year

, where for each quarter, the data was a simple average of the quarterly real GDP numbers, or

The general eq. for annualizing data is explained by the Dallas Fed.

At this point I think I deserve at least a specialty certificate, if not another MS in "BEA accounting madness". I dig around often in their various methods annual GDP, while you don't see those sudden dramatic spikes you see in quarterly, basically is a valid number.

Doesn't mean those two quarters of disaster Q4 2008/Q1 2009 didn't happen. The above yearly, does actually match mathematically to the below quarterly graph.  Quarterly data is annualized and all it says mathematically is what would the rate look like if it extended not just for 3 months, but over an entire year?    You can see the above annualization EQ basically breaks back down to percent change and that's why (1/1 is really 12/12 or 4/4 depending if one is annualizing monthly or quarterly).

Anywho, this stuff can get very confusing and why I bother to write it up.  I have seen more than one financial journalist make gross errors with I think Market Watch having the least, AP with the most and Bloomberg...well, I don't know what they are doing "prewriting" economic metrics as "probably" which are always wrong when the release comes out...

anywho, it came be a minefield from hell to parse through BEA numbers, definitions and methods (guess same is true for all of 'em). 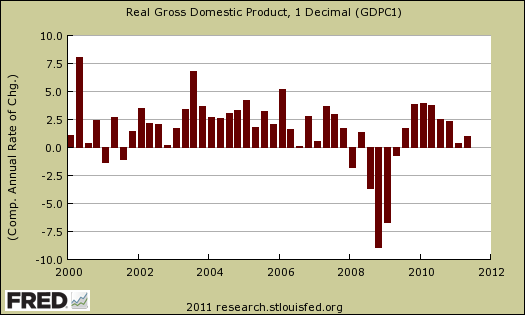 Just a minor typo, but for the record ...

like U.S. Chamber of Commerce is such a unbiased source ...

Their numbers are fine and in this case, the releasing statistical agency is the BEA, who is under the U. S. Chamber of Commerce.  [Oak, underline added]

Should be "U. S. Department of Commerce"!

Excellent explanations, especially for math wonks like myself. Definitions with math symbols can be much easier to read and understand than the explanations in plain language (seriously, although some may think I'm making a joke). Hardest thing for me is all the doggone acronyms!

I think ecologists call it a "bloom".

Note that Zandi analysis came from an independent banking analyst who was anonymous, as his firm does work for and with Zandi's employer.

So, I will take your insight to imply "Zandi" might be more on the money than his normal track record.

I read your site all of the time and it would be useful if you're aware, which/who are actually good at forecasting. I know I would read that intel.

On this site, I actually do number crunch to guesstimate GDP but just the next quarter and from the data. I have no awareness of what kind of prediction algorithms, methods these people utilize to predict economic metrics more than 1 year out.

The war on the middle class - 228375 reads
On Posts - 123777 reads
Unemployment during the "Great Recession": a Continuing Structural Change in the Economy - 31890 reads
Site Upgrade! - 48034 reads
The Economic Populist Site Rank, Statistics and All of That Jazz - 134978 reads
A Proposal for True Keynesian Economic Stimulus - 26794 reads
S&P Downgrades the United States to AA+ - 34031 reads
House discusses 401k/IRA confiscation - 238311 reads
How Many Jobs Are Needed to Keep Up with Population Growth? - 265552 reads
Progressive Alternatives To The Current Economic System - 18501 reads