The PEW Research Center reports a Lost Decade of the Middle Class.

Since 2000, the middle class has shrunk in size, fallen backward in income and wealth, and shed some—but by no means all—of its characteristic faith in the future.

Much of the statistics used by PEW are from an annual report we delved into and graphed earlier. PEW also has survey results.

Fully 85% of self-described middle-class adults say it is more difficult now than it was a decade ago for middle-class people to maintain their standard of living. Of those who feel this way, 62% say “a lot” of the blame lies with Congress, while 54% say the same about banks and financial institutions, 47% about large corporations, 44% about the Bush administration, 39% about foreign competition and 34% about the Obama administration. Just 8% blame the middle class itself a lot.

In yet another study we see those in their prime retirement earning years, instead of increasing their retirement savings, lost them. 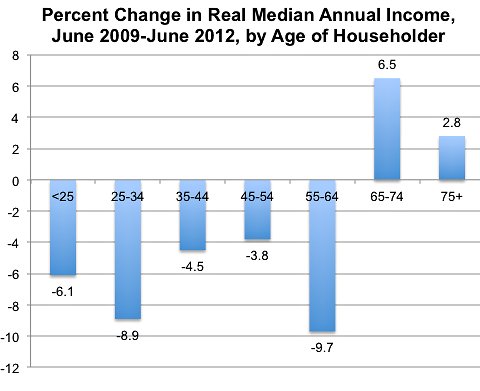 Americans nearing retirement age have suffered disproportionately after the financial crisis: along with the declining value of their homes, which were intended to cushion their final years, their incomes have fallen sharply.

The typical household income for people age 55 to 64 years old is almost 10 percent less in today’s dollars than it was when the recovery officially began three years ago, according to a new report from Sentier Research, a data analysis company that specializes in demographic and income data.

Across the country, in almost every demographic, Americans earn less today than they did in June 2009, when the recovery technically started. As of June, the median household income for all Americans was $50,964, or 4.8 percent lower than its level three years earlier, when the inflation-adjusted median income was $53,508.

Bloomberg Law interviewed Steven J. Harper, an adjunct professor at Northwestern University School of Law, who says debt forgiveness for law school (which is beyond belief expensive, guaranteed six figure debt), would be good for the economy as well as the law profession. Got that right, who is going to work for a cause when saddled with 6 figure debt? And you wonder why only large corporations have teams of attorneys working for them.

In the ongoing war between House Oversight and Government Reform chair Darrell Issa and Ben Bernanke, we have a letter from Ben answering, vaguely, questions from Issa. We've attached the letter to this post. The Fed cannot really affect employment because today's labor market woes have nothing to do with lending and liquidity and why this argument goes unchallenged is another question. Yet, the real unbelievable ridiculousness is how Wall Street once again went hunting for signs of quantitative easing, their crack fix, and went nuts over a trifling paragraph contained within the letter.

There is scope for further action by the Federal Reserve to ease financial conditions and strengthen the recovery.

Good freakin' God, clearly help for U.S. workers isn't to be found on Wall Street, in Congress, from this administration or at the Federal Reserve.

Ah, the snow keeps falling. The New York Federal Reserve claims AIG made an $3.4 billion profit from their bail out and overall the NY Fed claims their maiden lane portfolio generated a $6.6 billion profit. But check out where these profits came from. Yes folks, CDOs stuffed with toxic assets, such as bad mortgages, are clearly alive and well, trading again like the shell game and hot potato that they are.

The central bank sold $3.4 billion in toxic mortgage debt today that it inherited four years ago when it bailed out AIG, once the world’s largest insurer. The assets were the last batch from its Maiden Lane III LLC portfolio created to purchase $62.1 billion of collateralized debt obligations tied to risky residential- and commercial-mortgage securities that helped sink AIG when property markets tumbled.

Demand for subprime mortgage debt and CDOs has jumped this year as the housing recovery strengthened and the Fed extended programs to keep borrowing costs low.

It seems China's inventories are piling up. Piling up so high people literally can't move.

After three decades of torrid growth, China is encountering an unfamiliar problem with its newly struggling economy: a huge buildup of unsold goods that is cluttering shop floors, clogging car dealerships and filling factory warehouses.

The main nongovernment survey of manufacturers in China showed on Thursday that inventories of finished goods rose much faster in August than in any month since the survey began in April 2004.

You know it's a great huge lie to claim there is a worker shortage when not a woman or U.S. diversity minority employee is around in sight. Oops, gray hairs need not apply either.

The survey of 2,400 IT managers globally by Harvey Nash, a global staffing services firm, revealed that 35 percent of them say they have no women in IT management roles in their organization and that 24 percent have no women on any of their technical teams.

Also, despite the fact that about 50 percent of college graduates are women.

The above article is plain lying. They claim women do not pursue I.T., but that is completely false. What happens is they cannot get hired, or if they do manage to get that fair, the discrimination is so brazen, they find work in less hostile fields.

This is actually happening around the country. Public universities use our tax dollars with the charter to provide education to Americans. Instead we get this:

The California State University system is embroiled in a controversy over plans to admit higher-paying out-of-state and international students to its undergraduate and graduate programs next spring while barring California residents because of state funding cuts.

The issue has become so heated that department leaders on some campuses are saying that rather than turn away Californians, they will not accept any students into their programs

The below is ridiculous for Cal State already has tax dollars to educate state residents.

Cal State announced earlier that it would freeze spring 2013 enrollment on most of its 23 campuses to address $750 million in funding cuts during the 2011-12 fiscal year and to position itself for a $250-million cut next year if voters reject a November tax measure supported by Gov. Jerry Brown.

Under the plan, 10 campuses will accept new students for the term, but enrollment would be limited to a few hundred community college transfer students and select other exceptions. Cal State's campuses typically receive 70,000 applications in the spring, and 16,000 students enroll.
But now campus leaders are reporting that Chancellor Charles B. Reed told them nonresident undergraduate and graduate students were exempt from the freeze because they pay higher fees; California residents are subsidized by the state.

We cannot believe Samsung attorneys were so stupid as to let a jury pool be picked from Silicon valley residents who are U.S. citizens. Gez, if they wanted a favorable verdict, they should have demanded a change of venue to LA, the land where people don't even believe DNA. That said, what is so amusing about the $1 billion verdict in Apple's favor is the real lack of consequence, even if an injunction is issued on Samsung products. Why? Because the patents in question were for now older Samsung technology and the new patent war over existing technology won't happen until 2014. That's right, the new patent case over current Samsung products will happen about the very time those products in patent violation question will be at their end of life product cycle. Who says courts move like turtles and justice delayed is justice denied.

Samsung already pay the money in the form of cent by track,,,,,