As if you don't need more stark reality on how bad the recession damaged America, a report by IHS Global Insight for the Conference of Mayors reveals nine cities nearly destroyed by this recession.

The nation continues to be mired in an anemic, jobless recovery. And according to a report commissioned by the United States Conference of Mayors, and prepared by IHS Global Insight, many regions in the country still continue to lose jobs. Of the 363 U.S. metropolitan regions reviewed by IHS, only 61 will fully recover all the jobs that were lost during the recession by the end of this year. The rest will recover far fewer — the average city will only recover roughly 40% of jobs lost from peak employment.

Dealbook details the latest in MF Global and the missing $1.2 billion. Guess what, the missing money is traced, yet they won't say who has it and where and if those investors ripped off will get their money back.

Investigators have determined what happened to nearly all of the customer money that disappeared from MF Global around the time of its bankruptcy last Oct. 31, but have not publicly disclosed their progress, fearing that doing so might cripple efforts to recover the cash and pursue potential wrongdoing, people briefed on the investigation said.

While authorities have traced hundreds of millions of dollars to banks, MF Global’s trading partners and even the firm’s securities customers, investigators remain uncertain about whether they can retrieve the money.

This is interesting, the great bonus depreciation tax credit for buying capital goods will deprive the IRS of $29 billion more in revenue. Bummer they didn't put a conditional buy American clause on that stimulative tax break puppy.

A corporate tax break for buyers of computers, engines and other equipment is proving surprisingly popular, depriving the federal government of tens of billions of dollars in expected revenue and increasing the amount it will need to borrow this year.

The Congressional Budget Office said this week that corporate income tax receipts were $10 billion below its expectations in the fiscal year that ended in September, and that it had reduced the anticipated amount that the government would collect for the current fiscal year by $29 billion.

During college and grad school, Gray took out loans totaling $40,000 from Sallie Mae, the company that originates and services student loans. She went to Hunter College in New York and in 2009, she received her master’s degree with honors.

But like many recent graduates, Gray has found it nearly impossible to get a job and is struggling to make ends meet. “It’s excruciating. The job listings these days are full of unpaid internships,” she said. “Aside from unpaid internships and temp gigs … all of the other listings demand seven to 10 years of experience that no new grad has.”

Gray has been forced to defer her loan payments, a process called forbearance. “I want to work at any job I can get and I want to pay off my debt” — a debt that is now close to $65,000.

Why Does Health Care Cost So Much More in America Than Anywhere Else?

A good overview on the latest research gives two main reasons why Americans are paying so damn much for the same health care services as other nations.

The first is the much higher administrative overhead costs loaded onto the American health system. David Cutler and Dan Ly, both of Harvard University, illuminate this proposition in their recent paper, “The (Paper) Work of Medicine: Understanding International Medical Costs,” in which they compare health spending in Canada and the United States.

A second major factor accounting for high health spending per capita in the United States is the significantly higher prices Americans pay for virtually all health care services and products.

Would you like to buy the Brooklyn bridge with that colonoscopy?

Reporters are Paid, So Why Do Others Have to Do Their Homework?

EPI is on the case correcting gross mistakes from faux paus Journalists writing about income inequality. Hello, the statistics are as plain as day, is it so tough to read them? 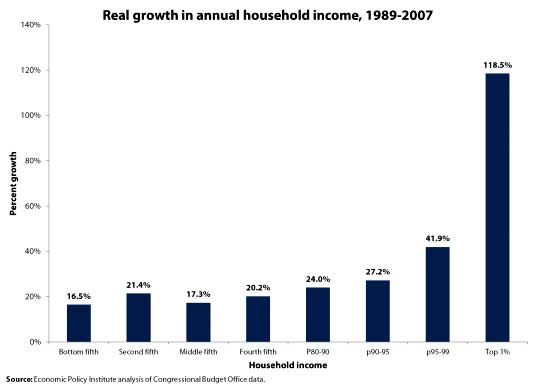 Nice Call Out on Davos

I have no idea why anyone would pay attention to the World Economic Forum. It seems the conversable economist doesn't know either. On commenting about the perceived global risks of the next decade he said:

To me, these sorts of fluctuations are mildly disturbing. They suggest that the high-powered folks answering these kinds of surveys are often reacting to current headlines, and haven't actually given a lot of serious thought to what risks are most likely to arise in the next 10 years nor to how bad those risks might be. Of course, that's also why reports like this one are useful and potentially important. Taking actions to reduce future risks now can often be much cheaper than cleaning up after they occur. But that requires forcibly lifting our eyes up from the headlines of today and trying to develop a clear-minded vision of future risks over the middle-term and the long-term.

Check out this post on how globalization nearly exterminated the Buffalo too.

This isn't so much of a link than a call to become aware of what's happening. One must wonder if we have another glorified genocide in the making, so many Syrians are being killed. Of course, Russia and China vetoed a U.N. Security Council resolution backing calls for Syrian President Bashar Assad to step down.

Happy Saturday. What stories did you see this week that stuck in your craw?

They still are not saying where the money went but the timing of these trades was just revealed, it's absolutely incredible and MF Global was clearing trade with investor's accounts.

MF Global (MFGLQ) Inc.’s $1.2 billion in missing customer funds began to filter out on Oct. 26 as the company’s computers and employees couldn’t keep up with margin calls and increased demands for collateral, according to a trustee who has traced where most of $105 billion in cash went during the company’s final days.

James Giddens, the trustee overseeing the liquidation of the failed brokerage, said today that the company didn’t record all cash movements amid the “unprecedented volume” of transactions in final days before it collapsed. After tracing 84 transactions worth $327 billion, the trustee is still analyzing where some of the money “ended up,” he said today in a statement.

The company moved $105 billion in cash in the last week before its parent filed for bankruptcy and made $100 billion in securities trades, according to the statement. The trades included liquidating customer securities and the firm’s own positions.

I find naked capitalism to be following this one the most closely, look to the left column for a headline from her.