The site structure has changed. Now all blog posts go into the blog queue and do not start out on the front page.

All posts must now be promoted, or voted up to the front page. See the up/down arrow at the bottom left of each post.

This change is to reduce clutter on the front page as well as for quality control.

It requires everyone to read the new blogs section, now at the top of the site as well as vote on posts to promote them to the front page.

Read the about section for more posting details.

Any issues, problems, complaints, leave them in the comments.

This is a temporary solution until the site upgrade is complete.

All RSS feeds right now remain a queue, based on posting time, with no waiting, as well as the real blog page.

The layout and the theme was also changed. This is also temporary until the upgrade is complete.

Also the Forum categories were reorganized to help with better categorization and navigation.

Please help keep the quality of the site up, the comments on topic and focused on the post at hand.

Keep it analytical, not so much political and most assuredly not personal.

It's a quick fix because the coding I have to do for the real upgrade is a lot of work, but glad you like it. While I hate giving up all of the color, I thought this looked more readable and navigable.

Can you be more specific?

I might be able to quickly add one change to this version, which is to let you do "your own colors" (let's do our colors! I am "fall"! - anyone remember that from Michael Moore's Roger&Me?)

Anywho I might be able to quickly get that written up.

The structure is another story. but let's hear the specifics.

I know enough about XHTML that some of depends on the browser and display settings. With that in mind I'm using Vista and Firefox.

1) The gaps in the upper-right are distracting. I'm hoping that this is on your agenda to be fixed.

2) The colors clash too much. Granted, I'm slightly color-blind, but to my eyes is just isn't pretty.
The background color looks fine - in fact, better than the old color. But the window colors for Instapopulist, and New Blog Posts are too dark for the overall background color.

can you email me a screen shot offline? I checked a ton of browsers, but if you fire off a screen shot w/ Vista ver. FF ver. that will help me see if it's a display issue or a color issue. You can see I don't want to spend a hell of a lot of time on it if it's major and instead get this @&*)$@&!!! upgrade done and then work on those bugs. But if the site displays badly on a major OS/Browser that's bad juju.

At the risk of being banned (again), I would say the colors aren't that bad. Couple of questions:

1) Since we're going to a voting system akin to other sites, which is understandably for quality control issues, does this not make Instapopulist redundent now?

2)What kind of voting system will you be implementing, recommendations like Daily Kos or something with tips jars?

3) Everything looks too close, any chance of spacing things out or moving some stuff?

4) Will you also fix the comments section? It seems that as the discussion progresses, the box or space in which they appear gets more "smushed."

The voting system has always been on EP. I just switched it around. It's custom code, I found some nonfuctioning "sketch" of the idea in open source and modified it. I'm looking for additions, more sophisicated algorithm, but it's kind of "trial by fire" to get it to do what it should, plus I have to figure out how to write it.

What's happening is literally I'm changing mySQL database entries by user input, which is a little more nasty to implement.

It's not like DK, where things can become a popularity contest (I hope), it's really for a "bottom up", or user moderation system as well as to alert people to particularly great pieces. DK doesn't allow anyone on the front page, same is true for pretty much every community site out there.

I am using, as a guinea pig, noslaves.com for testing code modules. NoSlaves.com is a new "techie bitch site" and I'm letting "anything go" on there to try to get Professionals to start using the web to pass a particular bill, Durbin-Grassley to reform the Visas (H-1B, L-1) which are used so commonly to displace U.S. tech professionals (as well as many other professionals). So, ignore the "content" of it, check out the structure and tell me what you think.

This is the base theme I am considering using for the upgrade:

but I might take the structure that is on noslaves.com and simply lift the "look" from the above style and add it to that display system that is currently on noslaves.com

Comments: I got AJAX to work on noslaves.com so that should help with "squish" as well as the comment box.

DK and the other sites have "squish", so let me think about what I can do if you've got squish going on, maybe I can calculate out the "squish" and then have the next comment box open on a fresh page or something. Very good point, big problem on every site with a lot of discussion going on.

On the forums (Instapopulist), yeah, I'm not sure. The problem there is the forum layouts. If you ever go to Democratic Underground, that's mainly forums, which are supposed to be more for discussion. But the navigation into them is what bugs me and I have to think about that.

But they go into a different category on the actual database, they are more indexed by topic, more heirarchical than blog posts. I have another trick by which to categorize things, which are those meta tags you see.

But for now, the idea of those "short, hey man did you see this"? posts versus all of the hard work it is to write up a blog post, I want to enable the ability to do those short sorts of things to get more visibility (because in a comment it gets more buried), but not fill up the front page with "hey man, did you see this" and let the more original pieces, the in depth writings be there and be the "1st and foremost" content piece for people to read.

Spacing: check out noslaves.com, esp. is you have a massive monitor and let me know what you think. I have that site on "scalable" to change size with the width of the browser window.

JV, you were never banned, or threatened with banning. I'm trying to keep things above board for the most part, analytical, so if someone is going off the deep end who is not a troll/psycho/hostile/whatever I might put them on "time out" to take a chill pill and calm down. But that's to keep the site on topic.

I think all have seen many sites degenerate into pie. Ya know, come on, we're hard core econ over here, I just don't want to "go there". So, if others have some suggestions so I don't have to be the bad guy so much here, let me have 'em, because I would much prefer to assign the roles of the site gestapo and police state to users. ;) But believe me, if someone doesn't do it, a site will degenerate into "me first, first comment, you suck, so and so is a big dick brain" and so forth very rapidly. Same is true for economic fiction land.

This morning you saw a series of blues. Currently the site is set on a new, alternative color scheme. What do you think of this one? Please let me know because I was torn between the two. As a refresher, here is the look from this morning: 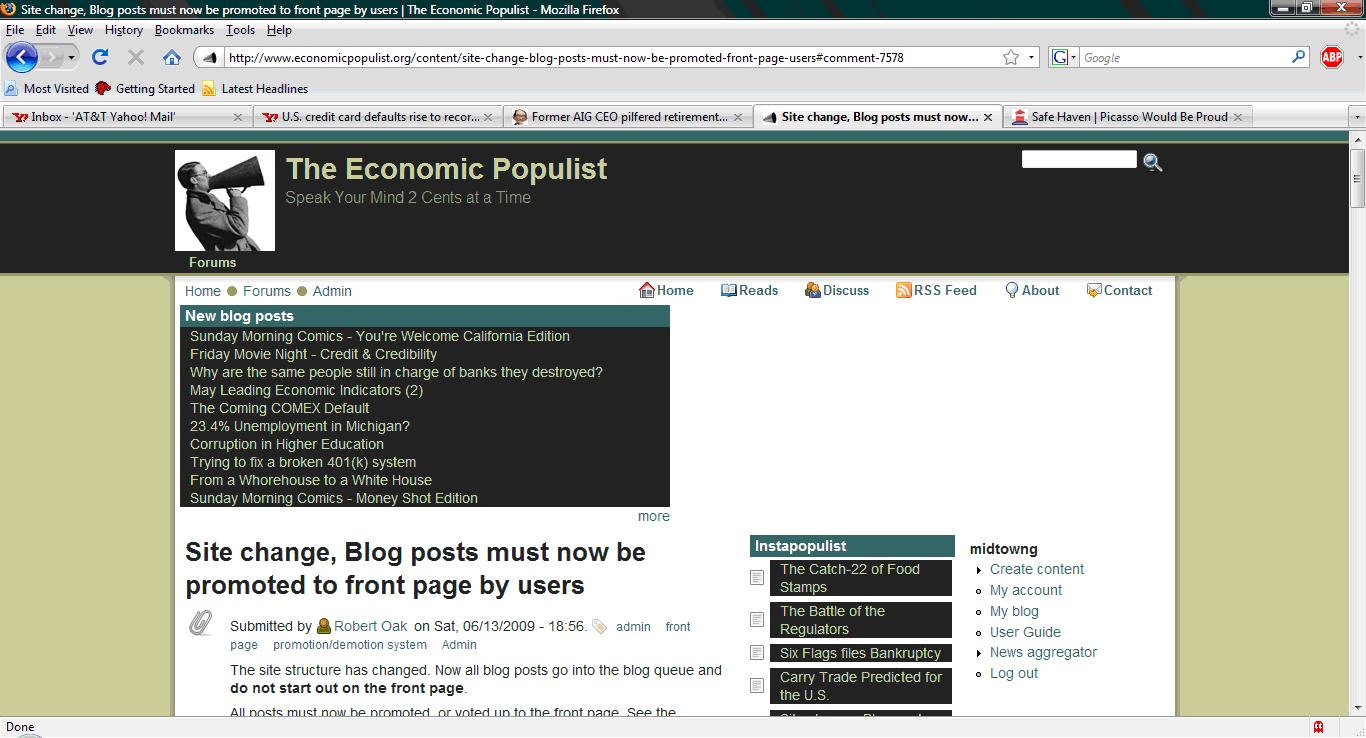 current one, which has a mauve tone to it or the previous one, where I left a screen shot so people could compare?

(bear with me folks, I really need help when it comes to "doing my colors").

Just logged out and back in, and realized what the new one was.

TOO MUCH RED is my humble opinion........I think I'll leave my personal account on the other theme.

Thanks for the reminder to check my settings. I like the "Amadeu" theme much better than the "tapestry" theme. Clean and crisp. For me it wasn't so much the red, but the black background with white lettering that I didn't like. Amadeu is bright and professional, IMO. Good job Robert!

I really want to just nail this one down because it is temporary until I get the upgrade done.

I just determine which default color scheme is better. The default will remain the overall "tapestry" for now.

1. the screen shot in the comment
2. the current default.

Amadou has a host of other technical problems, which is why it is not the default.

One feature is becoming obvious to me on the site upgrade is to enable as many themes as I can get functioning correctly so users can customize the site per their own tastes. So that's now on the "upgrade feature wish list".

Remember to make a post go to the front page you must vote them up!

We want the in depth pieces to go to the front page, the most detailed posts, etc. to get more visibility.

Also, well done ones and then if an instapopulist is more in depth piece, it too can go on the front page.

You can also vote things off of the front page, but please, only consider the depth,quality, accuracy of a piece.

Let's not turn this into a popularity contest but a quality of material/content contest instead.

I think people are forgetting you must promote, with that "up" arrow (or down) on the bottom left, posts to have them display on the front page.

Don't forget else our front page will be empty! (or maybe just a little too picky!).