Surprise, when tax revenues increase the deficit goes down.  Such was the news of a new CBO update on the budget deficit.

Relative to the size of the economy, the deficit this year—at 4.0 percent of gross domestic product (GDP)—will be less than half as large as the shortfall in 2009, which was 10.1 percent of GDP.

Below is the CBO graph of the newly projected budget deficit.  As economic activity increases, tax revenues increase, people need less social services and deficits go down.  Winding down war also helps.  Fannie Mae also gave Treasury a gift of $59.4 billion in unexpected Q1 profits and has paid $95 billion to the Treasury this year.  As a result, the deficit has dropped dramatically.  Who knew, unless one took a basic economics course, that budget deficits and a terrible economy are linked and highly correlated. 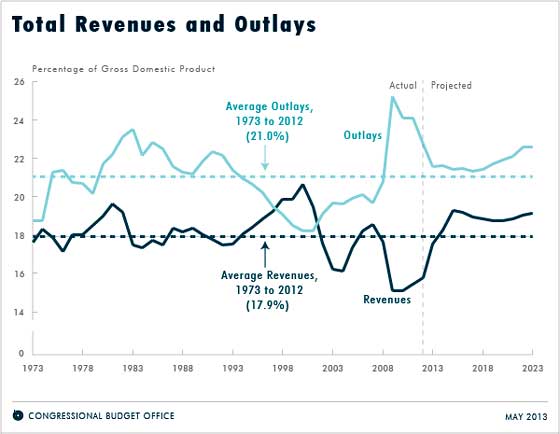 Gouging health care costs are still a major problem, but this mega disaster so many rail about as the next great economic implosion has time to be averted.

Because revenues, under current law, are projected to rise more rapidly than spending in the next two years, deficits in CBO’s baseline projections continue to shrink, falling to 2.1 percent of GDP by 2015. However, budget shortfalls are projected to increase later in the coming decade, reaching 3.5 percent of GDP in 2023, because of the pressures of an aging population, rising health care costs, an expansion of federal subsidies for health insurance, and growing interest payments on federal debt. By comparison, the deficit averaged 3.1 percent of GDP over the past 40 years and 2.4 percent in the 40 years before fiscal year 2008, when the most recent recession began. During the next 10 years, both revenues and outlays are projected to be above their 40-year averages as a percentage of GDP. 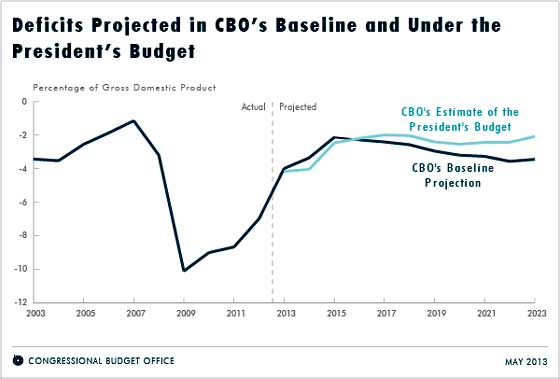 Thing is Obama is reducing the projected federal budget deficit on the backs of most Americans.  He is using chained CPI to reduce social security and retirement benefits, resulting in $233 billion in cuts to the deficit that is really taking money out of your pocket.  Chained CPI is a way to cut social security without owning up to it.  Obama's proposal results in $89.2 billion in social security benefits being denied for the years of 2014 to 2023.

Other budget cuts sound a little better.  By forcing drug companies to give the same drug rebates for low income Medicare recipients as Medicaid, the deficit would be reduced by $133.7 billion from 2014 to 2023.  Seems Medicaid recovers 45% of prescription drug costs via pharmaceutical manufacturer's rebates, yet Medicare part D only recovers 19% of those costs.

Higher taxpayers also get hit by removing and limiting deductions to 28% of total tax liability, which in turn adds to a whopping $493 billion in increased revenues from 2014 to 2023.  These caps include funding retirement and deducting health care plan premiums, including some employer based plans.

Finally, winding down the war in Afghanistan reduces the deficit by $601 billion over years 2014 to 2023.  Overall, Obama's budget adds $962 billion in increased revenues with about $172 billion in spending cuts.   As a result, the interest on the debt is reduced by a whopping $92 billion over the same time period.  Taxing the rich sounds great, but reducing retirement benefits on others and forcing people to pay taxes on those funds is not.

Both of the above events tell us the budget deficit is not the great crisis the House of Representatives want it to be.  These new budgets and projected deficits also tells us sensible reform that is not on the backs of working America isn't coming anytime soon.  Finally, the House Republicans guarantee Obama's budget is dead on arrival to pass.  In spite of Obama's agenda to reduce retirement benefits every American has already paid into, the House Republicans want to cut what meager funds are left even more.

Lest we not forget the insanity of the debt ceiling, the suspension on the $16.4 trillion borrowing limit expired on May 19th.  Now Treasury is going to extraordinary measures to keep the government running, while issuing statements such as we will not negotiate with terrorists Republicans holding the economy hostage again.  The drop in the deficit means the latest Congressional gun battle over the debt ceiling is postponed until after Labor day.  Make no mistake, it will be Republican ridiculous redux once again.  Last time the GOP refused to raise the debt ceiling resulted in a U.S. credit downgrade by S&P.  The latest polls show Congress has an approval rating of 14%, as if what the people think in gerrymandered districts mattered.