The Q3 2011 Federal Reserve's flow of funds report is more bad news for Americans, plus holds some obscene statistics from corporate America. Household wealth dropped a record $2.4 trillion dollars in three months, 4.1%, and is down about 13% from 2007. Household debt declined, -1.2% annualized, but mainly due to less people having mortgages and that's not because magically they got the money to pay them off. This is the 13th quarter in a row household debt has declined. Now here is the statistic which should outrage you. Corporate cash, liquid assets hit another record high and a 1.97% increase from last quarter to a whopping $2.115 trillion bucks. That's cash these same corporations could be using to build factories, plants, R&D centers in the United States, use to hire Americans, even fund a few scholarships for Americans. Instead over $2.1 trillion is sitting in their greedy vaults. 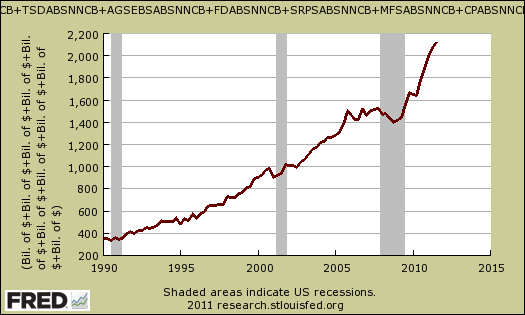 Those at Zerohedge have a huge claim from their analysis of the flow of funds report. They are saying there was a mass flight from European bonds into U.S. funds, dollars, Treasuries and this masked a $357 billion Q3 plunge in shadow banking.

I haven't had time to really analyze their analysis, but they have found things in obscure corners of spreadsheets previously, so I think it's probably right and worth a read.