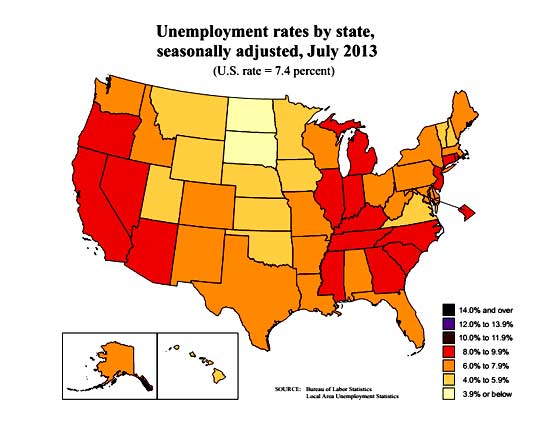 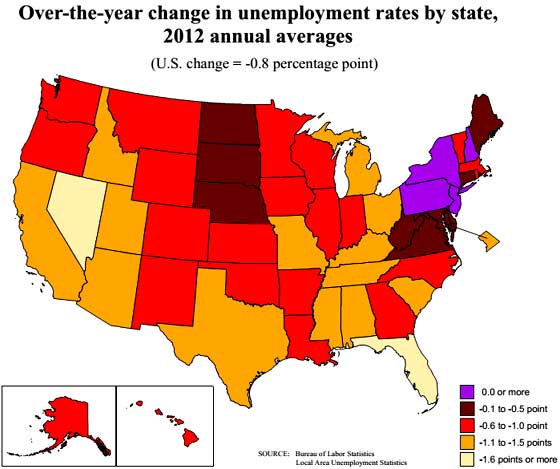 The sudden increase in unemployment rates isn't that much of a bad thing since the national rate has dropped mainly because people are simply no longer counted as unemployed, not because they all found jobs.

State monthly payrolls, on the other hand, are a slightly better story for July than the unemployment rates.  Payrolls increased in 36 states, decreased in 17 plus D.C. and had no change in North Dakota.  By percentages of total payrolls, Georgia, Utah, and West Virginia all showed a monthly 0.8% increase in jobs.  Nevada, is still one of the worst places in the country for jobs and this month proved their reputation with a -0.9% payroll decline in a month.  New Hampshire payrolls declined by -0.5% and so did Maryland's employment, by -0.4%.

For the year, everyone gained jobs except for Alaska, whose payrolls dropped by -0.5% for the year.  Utah showed the biggest increase in employment with 3.2%, Arizona, 3.1% and Georgia again with 2.8%.  Below is the BLS map of payrolls annual change, based on percentages.  15 states showed annual payroll growth of 1% or less. 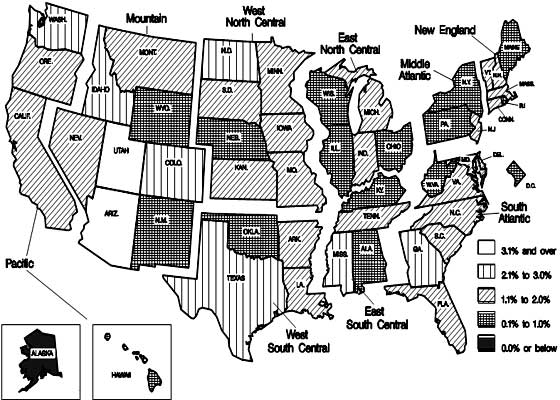 Another statistic available is the civilian, non-institutionalized population to those actually employed ratios per state. Below is the BLS map for the annual 2012 population to employment ratios and July's rates are here.  Overall, those rates haven't changed much from the 2011 averages.   One can see except really low ratios and the states in beige are the only ones with more normal percentages.  What this implies is beyond the potential large populations of those in retirement, there are clearly large populations not being counted as part of the labor force who are capable of being so. 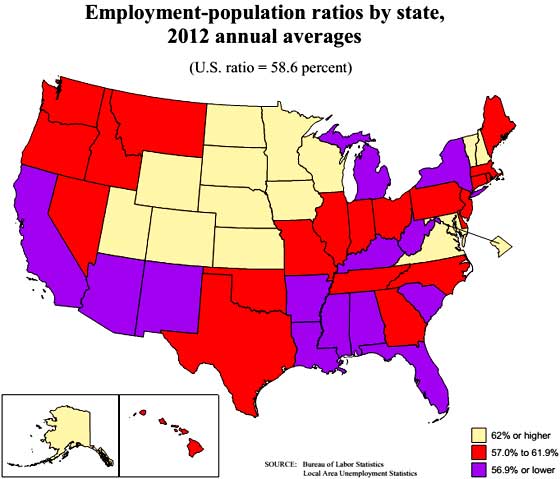 Generally speaking from the above maps, some states are way worse on employing their residents than others and some of this is demographics and in-state migratory behaviors beyond the types of industry and employers resident in a particular state.  In other words, folks living in California, Nevada and Rhode Island are still in a heap of hurt world.