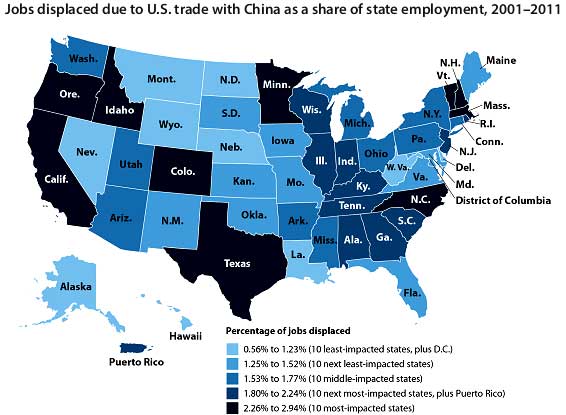 California alone lost 474,700 jobs due to trade with China. Considering the job slaughter and devastation, employment is the #1 crisis in America right now, it's astounding China trade isn't the top issue of Election 2012. Below is EPI's yearly tally of job losses directly attributable to the China trade deficit. 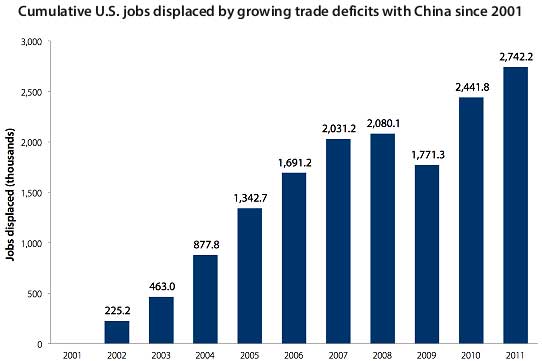 Guess which industries were hit worse? The computer and electronics industry, yes those same jobs of tomorrow touted in the 1990's. Have you ever seen any electronics these days manufactured in the United States? No and situation is so bad, if one tries to manufacture electronics or computers in the U.S., one has a really tough time obtaining the needed components and supplies for products. To get even a basic LCD component entails months of delay and that is because those components are manufactured in, you guessed it, China. This is called clustering and for the United States we might rename it clusterf*@k.

Among specific industries, the trade deficit in the computer and electronic products industry grew the most, and 1,064,800 jobs were displaced, 38.8 percent of the 2001–2011 total.

Those of you in Silicon valley who witnessed the Grapes of Wrath U-haul wagon trains leaving town as the area shed 50% of the tech jobs weren't imagining things. In addition to the dot con bubble burst, there was a mass exodus of jobs to China. Overnight thousands of office parks turned into ghost towns, complete with blowing tumbleweeds in the parking lots. In fact, Silicon Valley's biggest export today is still jobs.

Manufacturing lost 76.9% of the total jobs lost by trade with China. Durable goods' lost jobs were 56.9% of that percentage and the above computer and electronics manufacturing jobs were in turn 38.8% of that durable goods job loss tally.

It is not just jobs that China has cost us. Wages also are repressed. The report sites a $1400 wage hit per individual annually attributable to the China trade deficit.

New research by Joe Gagnon (2012, 3) estimates that massive currency manipulation, especially by countries in Asia, has raised “ the current account of the developing economies by roughly $700 billion [per year], relative to what it would have been. ” Gagnon also notes that this “ amount is roughly equivalent to the large output gaps in the United States and euro area. In other words, millions more Americans and Europeans would be employed if other countries did not manipulate their currencies…”(Gagnon 2012, 1).

There is much more to the report and we recommend you read it in full. The Alliance for American Manufacturing has put together an interactive map on the job losses from China. You can click on each state and then see Congressional districts as well with associated statistics.

WTO made the Representatives pledge not to protect their own business. Since India and China and the rest of the world will never obey such a pledge, the pledge leaves the U.S. to continue to play Uncle Sucker on trade. The pledge was non-binding but with an FTA with Korea and Columbia and PNTR with Russia, the pressure to shred the remaining industrial base will be intense.

Obama said during the negotiations on CFTA and KFTA that trade agreements will need to be enforced so that the electorate will trust future FTAs. Well, we don't trust such agreements. Why not have a plebiscite on trade? Dare ya. The polling on trade would have us shut down every FTA.

The companies out to destroy the U.S., who could care less about the deficit, the U.S. worker or the U.S. economy, beyond making sure consumers buy their products are U.S. MNCs. That's multi-national corporations and global finance. They are the ones pushing for these bad deals, they offshore outsource, move money around the globe for the purposes of profit, exchange rates, tax evasion (legal), and are the ones running the trade policy and really the WTO in practice.

Today's news, the Chinese bosses of "American" outsourcers like Tommy Hilfiger, Gap, and Calvin Klein are facing pissed off workers and violence in Bangladesh. But why oh why would someone be pissed off at the "American job creators" and the Chinese who benefit from such largesse? Because the Bangladeshi workers are being threatened with wage cuts after they only earn $50/month! Hey, "American" globalists, Chinese lovers of outsourcing and all that is right with a race to the bottom, welcome to your nightmare.

China and India and all beneficiaries of CEO greed, when you can't keep your own workforce fully employed in ghost cities or at Foxconn or Apple finally settles on a brand new facility in the jungles of the Central African Republic to build i-crap for food (no wages, sorry), it won't work out too well. As soon as Somali warlords get their people to make products for free as "interns" and create American products for sale here, you're all done! They're probably brighter and have more foresight than the current clownshow we have running the show.

As predicted here repeatedly, guess what happens when the American "braintrust" tires of increasing wages in China and India and even Bangladesh? New territories and new "employees" to exploit. All courtesy of guys and girls who couldn't last one day in a factory (let alone a sweatshop) making billions off other's misery. And when some countries and hundreds of millions of people are begging for living wage jobs and their countries care (or don't)? World Wars son! China, Cambodia, Vietnam, rehash all that simmering hostility - fight for your jobs, prove who really cares about its population/workers. Thailand vs. Cambodia, who really wants those jobs? India vs. Pakistan, that's a lot of folks who want to live and provide for their families. Burma, you want some jobs? Or is Thailand taking them from you? And if you get those factories, what happens if conditions get worse instead of better? In the race to the bottom, people do get mighty pissed off at being abused and if their governments don't protect them.

But whatever you do, don't blame NAFTA, or the WTO, or the Clinton or Bush or Obama administrations or Congress or Koch or anyone else promoting free trade, they are too smart, after all, they are rich, and only smart people get rich, or is it really corrupt people? Oh, never mind, I'm going to sit back and watch as HSBC shifts fines for helping Iran and drug cartels on to its patriotic customers and no CEO or employees ever go to jail for aiding our enemies. I wonder, can politicians and money laundering banksters work for less than $50/month? I bet they can, after all, American college grads with degrees work for free nowadays. Hey, corporate "job creators" and politicians, get your asses to Bangladesh and do something useful, make us some clothes. No job is too good for you, right?

I couldn't agree with you more. Unfortunately, the next step, automation, is well under way. American manufacturing is still the largest (as of 2011) representing 21% of world manufacturing. How is this possible since official unemployment is over 8%? The explanation is automation. Each year more and more complex manufacturing is being automated. And, this trend will not slow down, much less stop. Today's model of manufacturing to sell to high wage earners (that is how it works)is no longer viable since the economy will have fewer and fewer high wage jobs. It will only get worse.

So, what do we do? Think about it. It won't be long until we can have a growing manufacturing complex with 25% unemployment! I believe that this will make the industrial revolution pale in comparison. I don't have any answers, but it is time we start thinking about this.