In this month's losers, construction was #1 followed of course by manufacturing.

What about initial claims? It has dropped, but clearly people are not finding full time work. Below is a graph from The Washington Post, showing the month to month change.

I also stumbled into something cool. Google has embedded graphs and one can change the data points:

EconomPic has an analysis on part-time work for economic reasons. 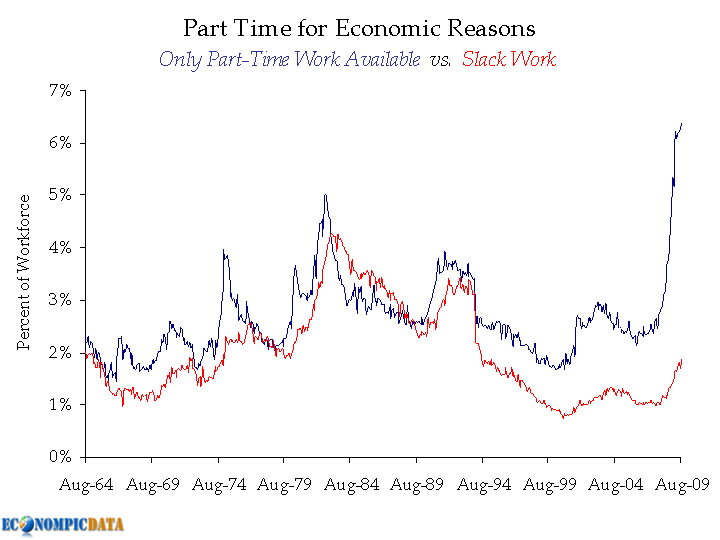 Bonddad has his usual positive interpretation of the unemployment numbers.

It would be interesting if one the bolgers on this cite would dialogue with his interpretation.

I'm trying to avoid direct confrontation with the "happy people", esp. since EP is a community site and they can express their analysis on here directly, minus "pie fight", (although sometimes i contemplate getting ahold of what they are smokin').

I do point to things I think are completely out of whack, such as a "V" recovery and so on.

I'm also not huge on determining the exact technical recession end point because I'm personally more interested in the structural problems, glaringly obvious, like income inequality, how the U.S. long term is selling itself down the economic river, the destruction of quality of life, standard of living...

I just went over and read the two posts.

This is the nonfarm payroll rate, which is defined as the estimated total number of jobs that are ones which you're an employee, get a paycheck.

Ok, here it is zeroed in for this recession:

Then, here it is longer term

So, basically we're still losing jobs that are at deep recession levels.

So, here is the rate of change of nonfarm payrolls

I think that shows the absolute numbers are still in recession land from past historical data. So, you can see a bit "uptick" on nonfarm payrolls change but still that "line" is about on track with 1980's and below the worst of the last recession....

so to me that ain't out of the woods by any stretch.

It needs to be positive, esp. considering how many jobs have been lost.

i.e. they are looking at current slope, I'm looking at absolutes and trying to compare that to the past.

WOW! That’s quite an answer. Thank you.

Also, notice that I used the word “dialogue” not "debate" so as to avoid the implication of "confrontation". Such dialogue as you just provided is very helpful to the general reader who gets information from all over and doesn’t have the professional credentials to evaluate the apparent contradictions.

Thanks again. This is why this blog is a must read for me twice a day.
Tom

in my view to be accurate and write so one can understand what they are trying to point out. I think everyone is doing a great job frankly.

Glad you're here! You can create an account on the right, it gives you the ability to comment without a CAPTCHA as well as track on your own comments to see who replied and so on.

midtowng put up another post which also spells out pretty much what I think, that while trend lines (not all though) appear to be improving, the raw numbers say we're seriously in the red.

It's interesting that Paul Krugman wrote this long article for the NYT the other day which didn't get a lot of notice until the last 18 hours or so. Indeed, macroeconomics is a very messy business and a lot of underlying assumptions need to be carefully thought out and re-investigated. So, at this moment it is really foolhardy to get into food fights over devining the future from current estimates of aggregates. Besides, as you say, there is enough reality around us that make the latest numbers seem irrelevant.

For instance, this article was published the other day at mybudget360.com, which lays out the severity of the unemployment problem in California alone (the 6th largest economy in the world was it?).

California Economy: $80 Million in Unemployment Insurance Being Paid out Per Day. 143,000 Exhausted Their Jobless Benefits on September 1. One in Four Unemployed Workers without a Job for 27 Weeks or More.

That comes out to a cool, annualized amount just under $3 Billion. All of the other states are in the same relative boat, albeit with much smaller absolute $ deficits.

As I have said in other threads, this is not just an economic crisis, it is a full blown political crisis with potentially awesome consequences. And the fools in the Beltway just continue to fiddle around, much as Nero did in his day. We in the blogosphere need not dance to their tune, and those that do will be exposed in due time.

143,000 people exhausted their unemployment benefits on September 1, in just California.
There are small, 3rd world nations that don't have that many people unemployment in a single month.

I admit to never having been a Krugman fan - I feel he's all over the place, but eventually he hits the target.

The major flaws with this article, IMHO, is that he is not speaking of the finest economic minds. (One exception: Keynes, who he correctly represents.) Milton Friedman...Nobel Prize or not, many of his ideas are sheer looney tunesville. The others, mediocre at best.

Go back to Jean-Baptiste Say. Examine Henry George's writings, his may very well turn out to be the major solution.

Much of Keynes' suggestions weren't adopted at Bretton Woods as they favored a balanced, economic continuum. Keynes believed that government financial infusions should be used to tweak the economic cycle, not to be the underlying foundation of it (which we are now experiencing).

Once this poorly thought-out stimulus bill has ended what minimal impact it has had, what then? Where's the economy outside of the Great Financialization?

Also, there were those who correctly predicted this meltdown -- just not the geniuses Krugman pays any attention to -- in that way he's just like the MainStreamMedia.

That is $80 million per day, which is annualized at nearly $30 Billion, not $3 billion. Oh well, the closer we get to infinity, the errors have less meaning.

To all those (like the bonddads) who are drowning in the "smiley face" kool-aid, I have but this to say:

Suppose we started off with a fortune of 100 pebbles.

Unfortunately, I misplaced another 10. Things are beginning to look up!

Past months were worse than originally reported.

why it's nuts to watch the weekly initial unemployment claims.

It's astounding. You must go back and look up each number and watch the changes.

There is no way anyone should be forecasting on even just one month's worth of unemployment data.

I wonder what the margin of error is (I don't see that easily in the releases).

The Birth/Death Index is getting more and more ridiculous. It added 118K jobs in August. That's 26,000 more than it added last year at this time.
These numbers are going to all be revised drastically downward a year or two from now.

It's interesting that the number of multiple job holders among men dropped dramatically.

And then there is the seasonal adjusting again. Note the number of people no longer counted as in the labor force.
In the seasonally adjusted numbers it rose 143,000, while subset of those still wanting a job rose 381,000.

But if you look at the non-seasonally adjusted numbers you find people no longer counted in the workforce rose 1,578,000 (an enormous number), while the subset of those still wanting a job rose 516,000.

I also found this via Zerohedge.


First, employment in this survey showed a plunge of 392,000, but that number was flattered by a surge in self-employment (whether these newly minted consultants were making any money is another story) as wage & salary workers (the ones that work at companies, big and small) plunged 637,000 — the largest decline since March (when the stock market was testing its lows for the cycle).
...
The adult male unemployment rate has already climbed above the 10% level.
...
The number of people not on temporary layoff surged 220,000 in August and the level continues to reach new highs, now at 8.1 million. This accounts for 53.9% of the unemployed — again a record high — and this is a proxy for permanent job loss, in other words, these jobs are not coming back.
...
First, some will point to the fact that average hourly earnings were up 0.3% MoM in August as a sign of a renewed wage growth. Sorry, but what this represented was the spillover from the minimum wage hike, which was so evident in the 1% surge in retail sector earnings and the 0.5% boost in leisure/hospitality — the two sectors most affected.
Second, aggregate hours worked fell 0.3% MoM in August and so far in the third quarter, aggregate hours declining at a 2.5% annual rate.

If either of you would be so kind, or have a mind...

you could collect all of these more detailed graphs like the birth/death model, the drop off rate and so on and
just write up a new blog post to be front paged instead of this one...

(no one said only one post on one topic as long as it adds to the overall information barrage/discussion).

There are a lot of ways to look at this to dig around..

and seemingly all of them telling us a worst story than the very bad story of a 0.3% jump in a month on the official rate!

big diatribe on how pathetic the MSM is on not focusing in at all at how bad the situation is for working America but also notes what we have been saying, yes us little Populists, the peanut gallery...

that by continuing to screw working America, the middle class, it is literally destabilizing the entire economy.

I believe we've hit that tipping point, where the middle class squeeze is bringing down the entire economy so it's nice to see a Professional imply it as well.