Happy New Year From The Economic Populist!  Another day, another year.  We hope 2015 is finally the time of the middle class.  Will finally wages increase, will jobs and careers recover?  So far that has not been the case, although 2014 is when hope for U.S. workers glimmered on the horizon.  We've survived the three biggest days to die in the United States, Christmas, Boxing day and New Years.  Now an onslaught of Republicans will take over Congress, so we can be assured any legislation to help the U.S. middle class will not be enacted.  We don't see why we should review 2014, after all most of us know it was just a continuation of 2008.  Jobs did increase, but not nearly enough to really get the middle class recovering and income inequality coming more into balance.  The dire circumstances for many working people is more the public has simply moved on.  Out of sight, out of mind does not mean things are fine now.  Things are still not fine for millions of Americans.  There is only so long one can point out some have been unemployed since 2008.  The real question is what happens to the great new underclass in America now, grown large by the past 15 years of economic disparity.  With that New Years Day summary, we bring you some must read economic stories.  The problem with the never ending parade of economic outrage is we read it, we write about it, and we are guaranteed nothing really ever will be done about it.

In June, HuffPost found that hundreds of hospices had gone six years or more without a government agent conducting an inspection to make sure they were following Medicare’s rules. Now, the new analysis shows that when inspections do occur and problems are identified, government inspectors are almost always satisfied with hospice promises that they’ll reform. Medicare’s federal regulator has punished a hospice just 16 times in the last decade, despite carrying out 15,000 inspections and identifying more than 31,000 violations.

This is one of the biggest successes and a great way to ring in the new year.  Below is the map of states helping out workers and the story is here.

I don't know, just read this:

The price of oil should be a warning sign to you. If oil falls the way it does over a significant amount of time, and other commodities do too, it’s just a matter of time until stocks and bonds start bombing merrily along.

'Tis the time to be greedy and the corruption of giving to corporations and taking from employees seems to be the only thing that gets done by elected officials.   One of the main reasons why conservatives across the US are trying to pass welfare drug-testing laws is to shame and punish poor people.   It's really that simple.   But they rationalize it by saying they need to "control government costs." This article goes over the true costs of corporate welfare:

Michigan Gov. Rick Snyder has signed a series of bills into law that will require some welfare recipients in Michigan to be drug-tested.

Obamaeconomics Had Made Rich People Richer

David Kay Johnston asks a very good question, why do conservatives hate Obama?  After all, he has made them filthy richer.

The investor class should be thrilled. Under Obama, the Dow has risen an astonishing 126 percent, to a record high of 18,030. Under President George W. Bush, the index fell by a quarter, from 10,587 to 7,949. Corporate America should exult. Profits, both before and after taxes, have doubled since Obama took office in 2009. Fiscal hawks should cheer, because the federal budget deficit is down from 10 percent of the economy in Obama’s first year to less than 3 percent in fiscal year 2015, which began Oct. 1.

If you think, gee wiz, it sure doesn't feel like economic recovery to me, you're probably right.  In global terms things are simply muddling along, stil on the hillside, vulnerable to a landslide.  Of course income inequality continues unabated as shown in the below chart: 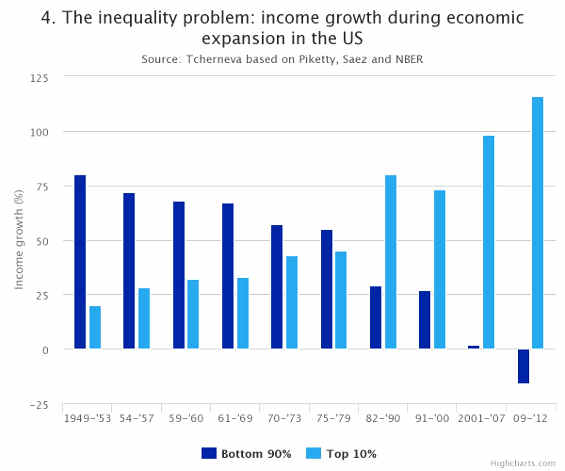 Not your Typical Year in Review

Dean Baker reviews what has happened since 2008 and it sure ain't pretty.

We have already lost almost $10.5 trillion in output because of the downturn. This is the value of the goods and services that could have been produced over the last seven years, according to the Congressional Budget Office (CBO), but were not because of all the people thrown out of work by the recession. To put this figure in context, it comes to more than $33,000 per person in the United States, or $132,000 for a family of four.

It's Official, our elected officials only listen to rich people.

The government doesn't listen to average citizens, just the rich and their lobbyists,' is probably the oldest criticism of any government, anywhere. But a new study has pretty much proven that this is precisely what's happening in Congress.

In Case You Missed It

There was a Wall Street Giveaway written by Citigroup which of course passed Congress. &nbsp:Mark Fiore gives you the lowdown:

the provision to deregulate derivatives owned by banks was written by Citigroup and inserted into the bill by Rep. Kevin Yoder of Kansas, effectively repealing the "Lincoln amendment" section of the Dodd Frank financial reform legislation that required the big banks to spin off the most risky portion of their derivatives business into non-FDIC-insured subsidiaries....as a result of this bill's passage, banks are now allowed to leave the riskiest derivatives in the same corporate entity as other banking functions such as savings that are insured by the FDIC...saver's deposits up to $250,000 are supposed to protected by the FDIC, but the FDIC fund has just $46 billion to cover $4.5 trillion worth of deposits, which itself is an amount dwarfed by the derivatives outstanding, and under the bankruptcy reform act of 2005, should a bank fail, derivatives get paid first...and while the bank's derivatives are normally hedged against one another such that overall profits and losses are minimal; the models the banks used when building these financial products (which are traded automatically based on quant algorithms) may not account for the 50% downward price move in oil prices, and should they fail, we'd have another unpredictable and unresolvable financial crisis on our hands, and likely another bank bailout..