The press and pundits shout the unemployment rate dropped to 8.2%, the lowest since January 2009, over three years ago. Yet March only added 120,000 jobs and those reported as employed dropped by -31,000. So, how could the official unemployment rate drop when the jobs added barely keeps up with population growth and the increase in those employed actually dropped? You see those yearly spikes and drops? Those are not magic sudden changes in population, those are statistical yearly adjustments. That mondo spike in January is the 2010 Census adjustments. In other words, the BLS adjusts the error for the entire year and tacks it onto the change between December and January. Additionally, every 10 years the new Census adjustments are added. All other ratios, including the unemployment rate, are derived from the non-institutional civilian population base. The workforce comes from this group of the population as does the group considered not in the labor force. The ratio of those participating in the workforce is 63.8% to those who are not. In other words only 63.8% of the non-institutional civilian population is counted as the civilian labor force. This ratio is called the labor participation rate. Only 63.8% are considered participating in either working or officially looking for work, the rest of the civilian non-institutional population, 36.2%, are not counted and are called not in the labor force. This ratio is at all time lows and ticked down a 10th of a percentage point from last month. Those of the civilian labor force who are employed decreased -31,000 to 142,034,000. Below is the monthly change in employment levels for the population based unemployment survey. Those unemployed decreased -133,000 to 12,673,000. Where did those people go to when those employed decreased? They went to not in the labor force, no longer counted as unemployed. There are millions of these people who have given up looking for work, then start looking again, when it looks like there might be a shot at a job out there.

There are actually two separate employment surveys. Those 120,000 payroll jobs added are from the other survey, the payrolls or CES survey. This separate survey asks businesses, not people, how many actual jobs they added. The household survey, from where the unemployment rate comes, has a smaller sample size, a larger error margin, plus those yearly adjustments. 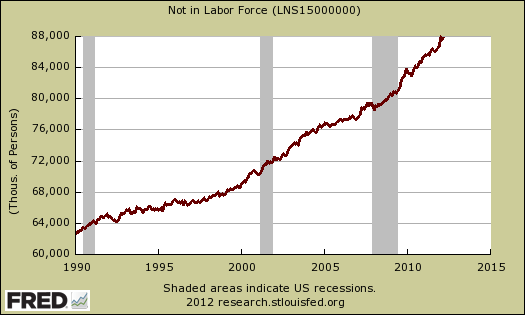 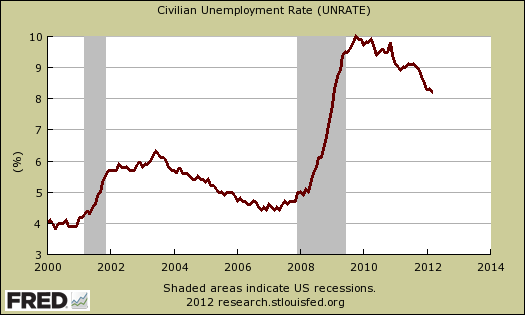 In other words, the official unemployment rate is close to double what it should be for a healthy job market. People are so used to a crappy, unbelievably worker hostile, labor market, they don't realize we have not had a decent job market since 2000. That's 12 years ago! The unemployment rate in April of 2000 was 3.8%. That's where we should be, not singing cheers over 8.2%, especially when this month's report indicates more people dropped out from the count.