Headlines blare everything from doom and gloom to a humming economy over this report, none of which is exactly true. First, this is the advance report and is almost always revised. Secondly, anyone believing the economy is suddenly booming will of course be disappointed. There is no data, anywhere, which projects economic growth to be robust. To put monthly percentage changes in perspective, below is a graph of the monthly durable goods new orders percentage change. As we can see, durable goods has a lot of volatility month after month. Durable goods must either decline by a huge amount or contract at least for a quarter overall to really indicate something bad is happening. We now have two months of Q1 2012 and the change is negative. That said, March may surprise yet. 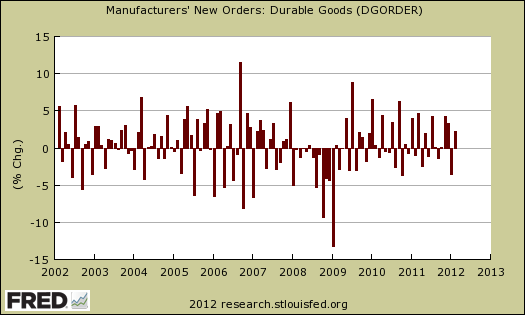 Shipments overall decreased -0.4% from January, in part a reflection of January's new orders plunge. Below is the monthly percent change for all durable goods shipments. Inventories, which also contributes to GDP, are at an all time high and up +0.4% for February. Inventories have been at all time highs for months and have increased for 26 months in a row. Core Capital Goods inventories increased 0.6%. Machinery had the largest inventory increase, 0.9%.

Core shipments contributes to the investment component of GDP. Q1 2012 is getting off to a terrible start with an average percentage change for the first two months of -0.8% for durable core capital goods shipments.