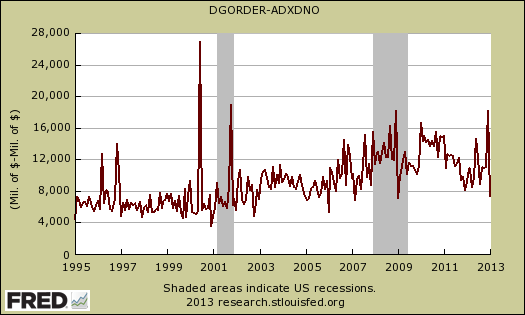 Here is the monthly percentage change in defense new orders and once can see the December gain against this month's fall below. 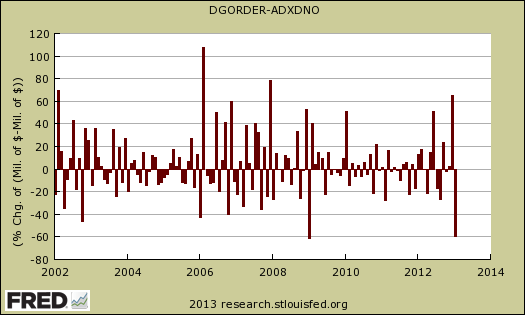 The third graph is defense aircraft new orders.  The plunge is dramatic, -63.8%.  That said, December saw a 58.5% increase, so flipping out over aircraft new orders generally is a bad idea. One needs to see a pattern for months, if not years to raise alarm bells.  After some analysis, there isn't anything that unusual here after all. 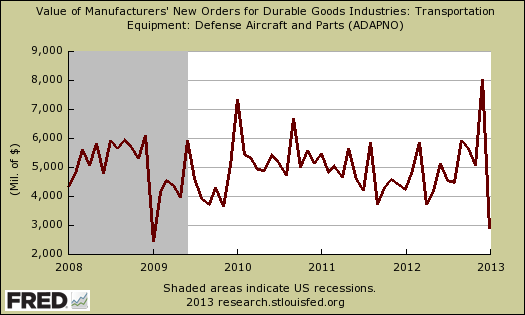 The final graph is defense capital goods new orders, which plunged -69.5%.  This is the figure some in the press have been reporting and flipping out on.  It's true this is the largest monthly percentage drop since July 2000.  It's also true that December 2012 showed a 107.3% increase in defense capital goods new orders, a figure not seen since February 2006, as well as right after 9/11, October 2001.  Due to December's dramatic rise, it's no surprise and nothing to get alarmed about for this month's defense capital goods plunge.  The plunge in defense aircraft & parts new orders is clearly the culprit, but generally speaking aircraft and parts is the most volatile new order category for not every day someone orders up a new civilian jet or fighter bomber. 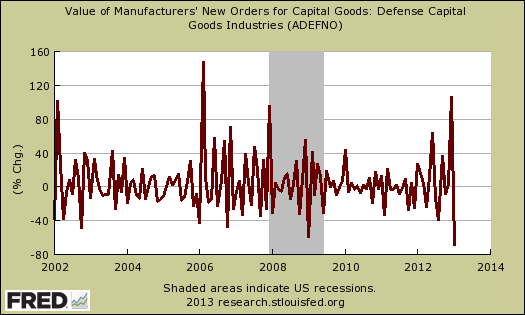 Core capital goods new orders increased 6.3% for January, which is a much better indicator overall for economic activity.  Machinery soared by 13.5% in new orders while computers plunged -15.5%.  Core capital goods is an investment gauge for the bet the private sector is placing on America's future economic growth and excludes aircraft & parts and defense capital goods.  Capital goods are things like machinery for factories, measurement equipment, truck fleets, computers and so on.  Capital goods are basically the investment types of products one needs to run a business. and often big ticket items.  A decline in new orders indicates businesses are not reinvesting in themselves. Shipments overall declined -1.2% from December and bear in mind new orders are not necessarily shipped the next month an order is made. Below is the monthly shipments  percent change for all durable goods shipments. Inventories, which also contributes to GDP,  increased 0.2% for January after decreasing -0.1% in December.   Probably a bad new indicator, the rise in durable goods inventories was due to transporation equipment accumulating to the tune of a 0.9% monthly increase.  Rising inventories with plunging new orders implies someone, somewhere is going to reduce them to match actual sales demand down the road. The below graph might give a feel for what kind of investment component we might see on PDE for Q1 2013 GDP. This is the monthly percentage change of nominal values, not real, not adjusted for inflation, for core capital goods shipments. We can see Q1 isn't getting off to a great start. We will be writing an overview and analysis on tomorrow's Q4 GDP revision. That said, this report doesn't bode well for inventories to be revised upward. We do expect an upward revision due to trade data and for GDP to turn positive. Current guestimate is 0.5% for Q4,