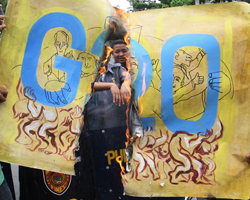 Germany, Russia and Italy were among the countries that opposed the 4 percent proposal.

While I thought it good news Geithner introduced a plan at all, Trade Reform notes that a 4% current account balance limit is far too high, it should be 3%. Bottom line, while Geithner went to the G-20 and IMF, it seems all good things happen when one DIYs it or do it yourself, i.e. takes unilateral action. Trade Reform quotes Ralph Gomory on this same theme, over and over again, multilateral actions end up in a lot of meetings, press releases, photo ops and not much else. Gomory:

One unpleasant aspect of reality is that we cannot have success with any real economic policy, if we do not balance trade. Foreign governments can be extreme in their quest for dominance in specific industries. And we see every day the destructive effect of their actions.

By balancing trade we guarantee that any inflow of goods is matched by an equivalent export of goods made here in the United States. Balancing trade, coupled with rewarding productivity, will move us a long way toward ending both the one-sided destruction of industry by subsidized competition with its consequent loss of jobs, and the growth of our indebtedness to other nations. And this indebtedness leads to a diminution of our actual independence and of our ability to control our own future.

The meeting, touted as a big achievement, magically changed some wording on currency exchanges from market oriented to market determined.

Believe it or not, this is considered action and a tightening up of currency devaluation. Really?

The G-20 also poo pooed the U.S. for quantitative easing:

There was pressure on the United States on quantitative easing that has flooded the banking sector and pushed hot money into emerging markets. The communique stressed the responsibility of countries with reserve currencies, i.e. the United States, to be "vigilant against excess volatility and disorderly." Countries such as Germany publicly criticized U.S. policy, suggesting tensions remain.

The rest is a lot of study, investigation on trade, specifically balanced trade, exchange rates and the like. Note the IMF has no power to enforce anything. By the time an investigation rolls around, often it's too late, that other country has already capture an targeted industry sector.

Geither went off to China for more talks, only to defend China and delay a currency report.

China views a higher yuan rate versus the dollar as in Beijing's interest because it does not want the U.S. Federal Reserve to control its monetary policy.

"They're an independent country, a large economy. They need the flexibility to run their policies in a way that makes sense for China.

Yaya yada, Congress, do something while Economics thinkers argue on whether or not the U.S. can win a currency war, based on history with Japan.

This gets worse, it seems the G-20 meeting is another blow off to convince the Senate not to pass the China currency manipulation bill which already passed the House.

Hey, Crooks & Liars are reading EP, we made it to their reads section, Thanks C&L!

They have a very good post on while other nations decide to do something economically, be it create infrastructure, build high speed rail or build up their manufacturing in some sector, they move in rapid time, whereas the U.S. just sits here, getting stomped on in the big global picture.

This is so true, it's so corrupt and the system itself will not allow fast, directed economic trade policy, i.e. Congress is where great ideas go to die.

We really need an independent economic and or trade policy board that can rapidly enact policy changes.