Everybody is all up in arms because the weekly initial claims data was released 15 hours early. Yup, folks, people trade on this report and it's a classic example of herd behavior. Over and over again we've warned initial claims data is always revised and simply isn't something to go ballistic on, yet based in reality or not, Wall Street lives and dies on the weekly unemployment claims report. 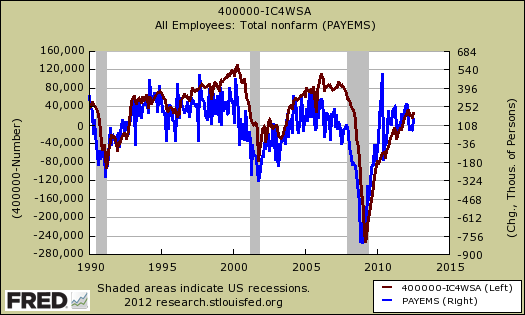 This is why you want to watch initial claims, job growth. That said, going off of the weekly reports is insane and below is why.

Initial weekly unemployment claims for the week ending on August 4th, 2012 were 361,000. The DOL reports this as an decrease of 6,000 from last week's revised figure of 367,000 people filing for unemployment benefits. Yet initial weekly claims are always revised. Last week's figure was revised up 2,000 from 365,000, not reported in the above difference. Below is the mathematical log of initial weekly unemployment claims. A log helps remove some statistical noise, it's kind of an averaging and gives a better sense of a pattern. We have a never ending job market malaise, we just cannot get initial claims to drop to the levels they need to be in order to really show some job growth. Notice in the above graph, initial claims really needs to drop to 360,000, but for a month to get some real umph in job growth. The recession ended officially in July 2009. In the week ending July 21st, not seasonally adjusted, the official number of people obtaining some sort of unemployment insurance benefit was 5,750,084. Officially, there are 12.8 million official unemployed.

So, a statistic gets released early, frankly who cares. The fact Wall Street is placing bets on this weekly statistical release states volumes about how disconnected from reality and the real economy investors really are. It's a gambling casino and this report is like the start of the latest dice roll. Has nothing to do with unemployment and job growth in the United States. High Frequency trading never generated a job for anyone, even U.S. engineers. Have more leaks DOL. Mess 'em up, they deserve it.

I'd place all my $ with Eddie Murphy and Dan Aykroyd (and toss in baggage handler/Senator Al Franken) trying to corner the frozen orange juice market before I'd give a dime to HFT algos and their human masters. Frozen orange juice vs. trying to learn ASAP the initial claim numbers to bet on whether fewer people with jobs left to fire is good news or not (kind of like a burning neighborhood - sure, at some point there are fewer houses left standing and the rate of destruction is reduced, but tell the residents that things are looking really good and improving). "60 Minutes" ran a special on HFT (and ZH has been destroying them daily for a long time now) and the people in charge didn't see anything wrong with their admissions that the market was being made/broken by machines that could execute the quickest trades in millionths of a second and were moving physically closer to the servers to beat the competition? And retail investors are supposed to trust such gamesmanship/manipulation? Same as certain banksters using carrier pigeons from the Battle of Waterloo to exploit information arbitrage - I'll pass.

Who knew, a comedy about a man in a gorilla suit, a $1 bet, and frozen orange juice made more sense than Wall Street? No doubt Randolph and Mortimer are working in Congress somewhere under new names or in some brokerage or bank.