The average length of unemployment dropped from 39.9 weeks to 38.8 weeks, which is a positive sign, although still absurdly long. The median time one is unemployed, which means 50% of people have gotten a job in this amount of time, also decreased significantly from 19.8 to 16.7 weeks. People unemployed for 27 weeks or more remains at high levels of the total unemployed, yet dropped from 41.9% to 40.7%. That's still 5.185 million people officially unemployed for over half a year, even though the percentage is finally dropping. Don't think this is that great of a sign, many people simply run out of unemployment benefits and then just drop out of being even counted as needing a job. Some are stuck in part-time because their hours were cut by their employer. These part-timers due to slack work now number 5,342,000, an decrease of 104 thousand from last month. Below is a graph of forced part-time because they got their hours cut as a percentage of the total employed. This metric is a solid recession economic indicator. See how closely the percentage increase matches recessions, the gray bars? The percentage of people in part-time jobs due to slack economic conditions has stayed extremely high since the start of the Great Recession. U-6 is a broader measure of unemployment, includes the official unemployed, people stuck in part-time jobs and a subgroup not counted in the labor force but are available for work and looked in the last 12 months. U-6 has also remained consistently high and was 15.0% for July. The real number of people wanting a job for July is 27.594 million, over double the official counted as unemployed of 12.794 million. One needs to add up the official unemployed, people stuck in part-time who need full-time jobs, and all of those people not in the labor force, but who report they actually want a job, currently at 6.554 million. Those not counted in the labor force but report they actually want and need a job increased by 34 thousand from June. 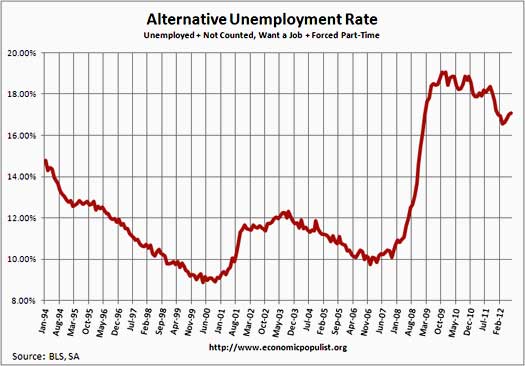 The two surveys, CES and CPS are always different and vary on a month by month on that difference. At the risk of publishing statistical nonsense, below is the CPS employment levels minus CES nonfarm payrolls, and this difference monthly change. As we can see the monthly difference varies widely, no surprise since they are separate methods. Just be aware the CES is payrolls, considered more accurate and the most quoted. 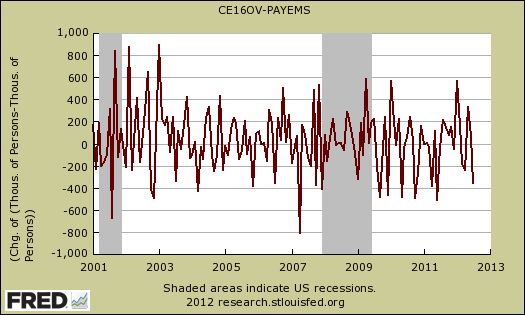 The shift to part-time workers that can be used and tossed aside quickly with no benefits and at much lower salaries is the most troubling. If someone is lucky enough to work in the US, they can only count on part-time? The burden of benefits merely shifts to the worker and other taxpayers. Notice how the #s for part-time workers skyrocketed after 9/11 and the 2008 collapse. Triple the number of part-time since 2001? And how many of those are "part-time" despite working less than 20 or 10 hours/week?
That's in no way a good thing. This proves this has nothing to do with the talking points about "uncertainty" (about taxes, health care, which bribes to pay to which politicians, where to buy a third vacation home, Fiji or Tahiti, or about life in general that teleprompter readers and their guests like to spout). This spans 11 years, if a business "leader" or politician wants certainty for anything beyond the next 12 hours, I would expect them to retire immediately and take up shuffleboard, the stress and uncertaintly is much lower (along with the salary + taxpayer + shareholder provided perks they've enjoyed). Profits were recently at all-time highs, part-time employment is at all time highs, and business is good for American businesses' top echelons. They have no reason to change and have been getting away with this under both parties no matter who is in the Presidency, House, or Senate - they will not change.

That's why I amplify these particular graphs. While people nit-pit over the monthly reports, all of these graphs looking like "dragon monsters" rising to eat our livelihoods and economy.

Internships are the epitome of all that's wrong with exploitation of labor in these times (and now pause for business talking points that no one is forced to take these and it's a free market - yawn). I could buy a computer program that reads talking points in a TV or radio studio fed directly from the Chamber of Commerce for free and replace these bloated clowns. So they should really start worrying about how special and unique they are and why exactly they think they deserve to earn tens of millions of dollars, certainly an H-1B worker with mediocre English skills could do their jobs, and better.

Typical example of internship. A think tank in DC posted one (one of possibly 1,000,000/year I read that probably count towards "employment") that requires full-time hours from someone who already has a PhD (and the PhD debt) in hand, acting as a main researcher on projects the think tank is running, living in DC (one of the most expensive cities in the US), with no pay. How exactly does one do work the think tank gets credit/publicity for, work full-time hours, not get paid, and still pay for rent + food? You have to be rich and have the right family connections, have some savings and expect to burn through them to work for free, or be poor and expect to be homeless very soon to work for free. All in the Nation's capital with no promise of employment from anyone after!
Of course this is one of many, from media to local/state/fed. agencies to international businesses and law firms. Imagine, working for free, trying to survive, debt impossible to pay off, and the head of the organization or the dept. is making phone calls while getting paid $100,000 - $1 million while asking for more money for his bank account or making phone calls soliciting millions of dollars so that the organization can spend it elsewhere (e.g., NGOs and philanthropies) while purposely ignoring the unpaid interns. And complete silence from the govt. on this issue because it engages in the same madness and loves free labor.
Again, if millions of people work for free, there is no incentive to pay them. Just look at what happened with London security fiasco where they forced the unemployed to work for free, forced them to sleep outside in the rain, etc. all by a private contractor that the UK govt. hired. How's that for exploitation? Security risk?

I've seen a lot of unpaid or minimum wage paid internships where the task list and skills are a full bore senior responsibility position. This shouldn't be allowed. What we need are a slew of internships, but they have to pay them enough to make rent in the area! Internships and co-cops are awesome generally but this is exploitative.