The April 2012 monthly unemployment figures show the official unemployment rate dropped a 10th of a percentage point to 8.1% due to people dropping out of the labor force. Total nonfarm payroll jobs gained were 115,000. Total private jobs came in at 130,000, with 21,100 of those jobs being temporary. Government jobs dropped, -15,000. While manufacturing gained 16,000 jobs, transportation and warehousing dropped -16,600 jobs. It takes about 100,000 jobs each month just to keep up with population growth so this is a terrible report for the American worker. 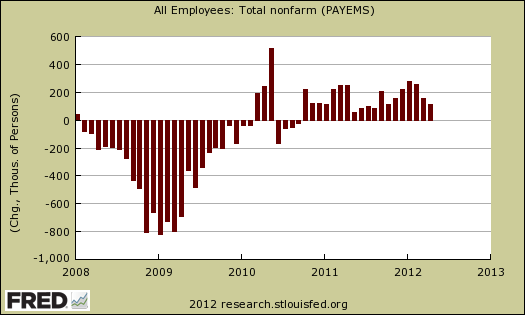 Below is a running tally of how many official jobs permanently lost, from the establishment survey, since the official start of this past recession. Increased population growth, implies the United States needs to create at least 10.4 million jobs or self-employment, using the population survey statistics. This estimate assume a 62.7% civilian non-institutional population to employment ratio, as it was in December 2007. This implies an additional 5.4 million jobs were needed over a 52 month time period beyond the ones already lost. This is just taking into account increased population against the payroll jobs gap, the actual number of jobs needed is much higher, in part because payrolls, CES, and population, CPS, are two separate data surveys from the BLS. Another problem with the employment market is the gross number of part-time jobs generally. There is a huge number of people who need full-time jobs with benefits who can't get decent jobs. Those forced in part time jobs increased by 181,000 in April. Of the 141.87 million employed as reported from the current population survey, there are still 7.85 million of the 26.69 million part-timers working low hours because they cannot get full time jobs. That's a hell of a lot of people stuck in part-time jobs who need full-time work. U-6 is a broader measure of unemployment and includes the official unemployed, people stuck in part-time jobs and a subgroup not counted in the labor force but are available for work and looked in the last 12 months. Believe this or not, U-6 still leaves out some people wanting a job who are not considered part of the labor force. U-6 has also remained consistently high and for April the U-6 alternative unemployment rate was 14.5%. We break up overviewing the monthly employment statistics due to the report's complexity and importance.

In this post is an alternative unemployment rate, calculated by us, plus duration, part-time workers.