The February 2012 monthly unemployment figures show the official unemployment rate remained the same, 8.3%, and the total jobs gained were 227,000. While this report is good news, we've got a long, long way to go before returning to a healthy labor market. Total private jobs came in at 233,000. Government jobs dropped, -6,000. Most of the jobs were in the service sector, 209,000. Temporary jobs increased 42,500. Manufacturing gained a much needed 31,000 jobs. January payrolls were revised, from 243,000 to 284,000. Government jobs only lost -1,000 in January when it was originally reporting government jobs were down by -14,000. December was also revised upward by 20,000 jobs to 223,000 for the month. Below is a graph comparing payroll revisions versus their originally reported values for the last two months. In January, the 2010 Census plus benchmark revisions were incorporated. 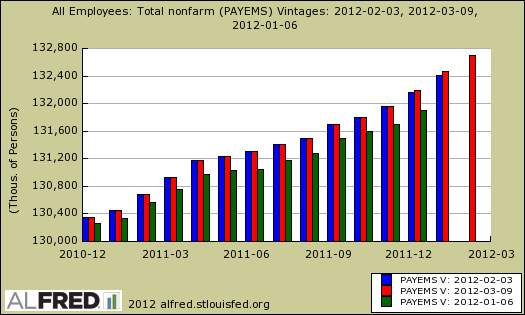 America is still running one hell of a payroll jobs deficit. The start of the great recession was declared by the NBER to be December 2007. By looking at the start of the great recession, we can calculate how many jobs we're still down from that fateful 2007 December. With the February payrolls growth, the United States is now down -5.285 million jobs. Below is a running tally of how many official jobs permanently lost since the official start of this past recession. Increased population growth, implies the United States needs to create at least 9.94 million jobs or self-employment. This estimate assume a 62.7% civilian non-institutional population to employment ratio, as it was in December 2007, which implies an additional 4.66 million jobs were needed over a 50 month time period beyond the ones already lost. This is just taking into account increased population against payrolls, the actual number of jobs needed is much higher. We're late to the data party, but we actually read the reports and number crunch to make sure it's accurate. Lots of information to analyze and it takes a while. We'll have more details soon, I promise.

Taxing Wall Street to Fund Jobs and Recovery on Main Street - 13448 reads
California is officially flat broke - 96228 reads
Safeway Skewered for Throwing 6,000 Workers Under the Bus in Video Parody - 334627 reads
The de-industrialization of the U.S. - 56882 reads
Will the NY Attorney General Bring Doomsday Charges Against Wall Street? If So, How Long Will He Survive? - 1152269 reads
The Panic of 2008: a turning point - 83383 reads
Gustav Eying Gulf Oil and the LOOP - 26631 reads
Tax Cuts for the Rich Do Not Generate Jobs - 245021 reads
China's Currency Manipulation Makes America See Red - 26508 reads
China and India Really Are Cheap Labor in Manufacturing - 100131 reads