The January Consumer Price Index had no change from December. CPI measures inflation, or price increases.  The culprit is gas prices again, which declined -3.0% for the month.  Take food and energy items out of the index and CPI actually rose 0.3% from December. CPI is up 1.6% from a year ago as shown in the below graph.  We can see this inflation measure is fairly low. Core CPI's monthly percentage change is graphed below.  This is the largest monthly core infltaion increase since May 2011. Core inflation's increase seems to be across the board.  Shelter increased 0.2% and is up 2.2% for the year.  The shelter index is comprised of rent, the equivalent cost of owning a home, hotels and motels. Rent increased 0.2% and lodging away from home, or motels, hotels jumped 1.2% for the month.  Airfares increased 1.1% from December and this is the 5th month in a row where air travel prices have increased.  Used cars and trucks had it's first increase in seven months, 0.2% while apparel increased 0.8%.  Graphed below is rent, where cost increases hits people who can least afford it most. A core inflation cost which never drops is medical care.  Medical care services increased 0.2% and has increased 3.6% over the last 12 months. Nowhere else do we see a ridiculous, constant increase in costs every single month.  You'll never see the below graph go below zero, unlike other item prices. Energy overall decreased -1.7% for January, and energy costs are now down -1.0% for the last 12 months.  The BLS separates out all energy costs and puts them together into one index.   Energy costs are also mixed in with other indexes, such as heating oil for the housing index and gas for the transportation index. Below is the overall CPI energy index, or all things energy. Graphed below is the household energy index which includes electricity and natural gas, shown by monthly percentage change.  This month the index increased 0.5% and the reason is electricity, which jumped 1.1% in January.  From this time last year household energy has decreased -0.4%.  This is a different, special index to show the overall costs for energy into your home only, (unless you drive your car in your mansion or run generators for your tent) and represents about 4.1% of month assumed expenditures. Graphed below is the CPI gasoline index, which declined -3.0% this month and the 4th month in a row.  Don't expect this to last as gas prices are zooming back up in February. Below are gas prices, last updated February 19th, where gas was $3.75/gal.   High oil prices have a strong correlation with recessions ad we can see next month's CPI should increase over the jump in gasoline. According to the BLS, for the year, food and beverages, which includes food at home, made up 15.3% of the index.  Housing is 41% and transportation, including gas for the car, is 16.9% and all energy is 9.5%.  Medical care is only 7.2%, they claim, which goes to show what averges can remove.  Most people are not sick and why the average costs are so low.  A Medical event can bankrupt a family, with insurance.

CPI-W is used to calculate government transfer payments, such as social security increases.  The cost of living adjustment (COLA) for social security and other government payments will be 1.7% for 2013. For January CPI-W increased 0.3%, not seasonally adjusted for the year has increased 1.5%. 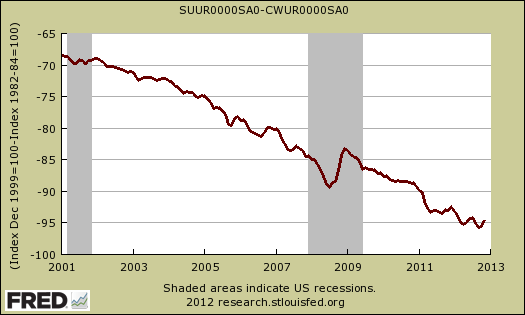 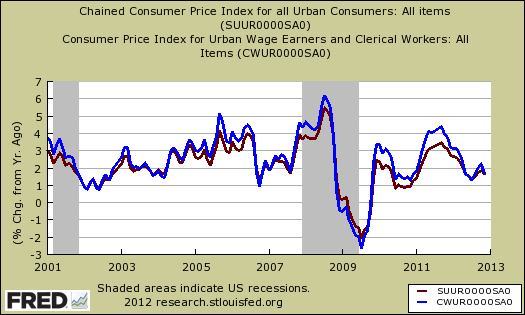