This should come as no surprise to anyone following CPI analysis, The Social Security administration will announce there will be no increase in social security benefits next year.

The government is expected to announce this week that more than 58 million Social Security recipients will go through another year without an increase in their monthly benefits.

Last year, there was also no increase, or cost of living adjustment in social security for 2010.

The COLA, or Cost of Living Adjustments are a strange brew indeed.

The COLA is taken from not seasonally adjusted CPI-W data, using only the previous third quarter, or the months of July, August and September, to calculate.

The below graph shows the COLA, (cost of living adjustments) per year and in green, this years projected COLA value. The CPI-W monthly, in blue, are not seasonally adjusted numbers. The third quarter CPI-W values are in red. Notice the big drop around 2008 for the consumer price index for wage earners (CPI-W). 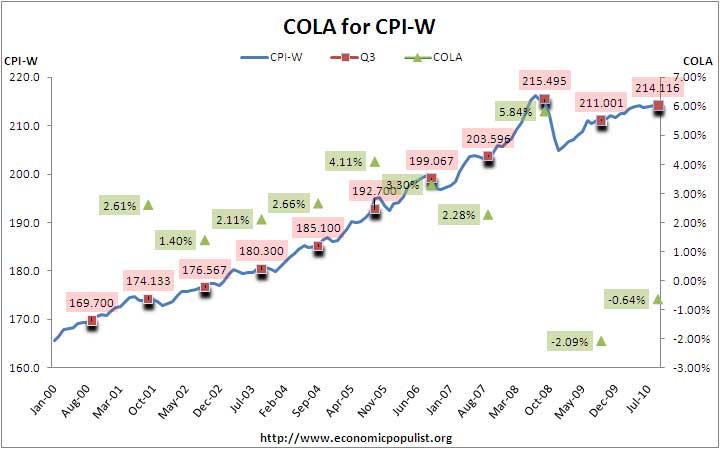 In fact the cost of living adjustment, COLA, for 2008 was 5.8%, the biggest increase since 1982. Blame oil speculators, for energy jumped in 2008 and why the massive bump up. The magic formula, upon which so many depend is:

The third calender quarter, or Q3 is July, August and September. CPI-W for September will be released October 15th.

How does the government calculate COLA?

Now what kind of calculation is that? Strange but true, even though CPI-W has increased from 2009 to 2010, they are comparing 2010 third quarter to 2008 to calculate an adjustment!

Yet the adjustment is against 2008, not 2009. Calculating the COLA for that time period used by the social security administration, namely Q3 2008, gives a percentage change of -0.64%. Since COLA adjustments are never negative, this gives a cost of living adjustment for 2011 of zero.

As important as the CPI-W is, it's an afterthought in the monthly CPI reports, otherwise known as CPI-U. CPI-W is not the same as CPI-U. CPI-W is the Consumer Price Index for Urban Wage Earners and Clerical Workers, whereas CPI-U, which is the one which makes the press headlines, is the Consumer Price Index for all Urban Consumers, uh, wage earners or not.

Below are the seasonally adjusted CPI-W monthly numbers. Notice the sharp increase then dramatic drop, with the peak values being in Q3 2008. The dramatic increase is from oil speculation, commodities bubble in 2008 and that dramatic decrease after it is the deflationary spiral, later, caused by the financial crisis. Oil and Banksters are affecting 58 million people dependent upon government transfer payments. 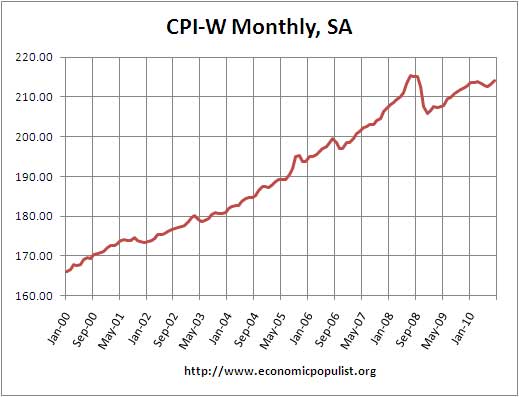 All other potential COLA (cost of living adjustments) depend upon this primary calculation. If the Q3 in comparison to the previous year COLA was not zero is less than 0.05%, nothing else happens.

Now, why does the government just use 1 quarter out of 4 for it's annual cost of living adjustment? Good question! Obvious it doesn't make a lot of sense, especially with creeps like oil speculators around jacking up the price of energy, only to have it crash and burn a few months later due to potential financial collapse.

It also sounds like this is another blame Congress for the social security administration appears to be dictated by the above COLA formula, regardless of it's lack of validity in terms of real living expense increases.

I hope folks realize that how the cost of living adjustments are actually done is almost never discussed. About a year ago, when the first zero adjustment happened, a host of retirees and others dependent upon government payments left questions on the site about how they could deny an adjustment and how it all works and what could they do to increase the adjusment.

This post attempts to answer that, abet a year late.

The automatic COLA adjustment got rid of a sticky political problem for Congress in the mid-1970s when it was enshrined in law. Before that, there was an annual ritual between Congress and the President, and in 1973 (it may have been 1972) Nixon threatened to veto the COLA increase in that year's bill. Of course, when Congress overrode his veto, he made sure a message (with portrait of himself) went out with the checks saying how pleased he was to be helping America's retirees cope with inflation.

Now a new question seeme to be emerging. Not quite deflation, not quite inflation (unless you track the small increment price increases on restaurant menus and such), and I think it was Barry Ridholz who coined the term recently "demi-inflation." If inflation continues at small increments, it could conceivably creep along below the half-percent threshold for some time. But the Fed is cranking up the presses and trying to resuscitate the Inflation Monster that seems to be sleeping on the job.

It seems nothing happens regardless of how much money the fed dumps in. I wrote a piece on money supply velocity, for it's clear, corporations and the super rich are just sitting on their cash.

Yes, it seems COLA is quite the political football, and thanks for the historical insights.
By taking just Q3, when we have a rigged Wall Street game, financial implosions and oil speculators, where you could get such a "hump" in one quarter, it's not giving a real yearly average of comparison.

Also, it seems CPI is really dependent on some sectors deflating, others inflating, so say you're not really dependent on buying a home anytime soon, it looks like your costs have increased more than the norm. Not driving a car in 2008? You were in the chips by comparison. Heating your home with oil?..the list goes on and on.

I'm just note sure, beyond globally devaluing the dollar, is going to happen with this QE2 at this point.

I remember QE1 and we all flipped out with Bernanke printing money like snow...
yet that intuitively was all wrong, which shows me we all need to brush up on our monetary theory. ;)

I wrote there goes the dollar, when mentioning money velocity and could use some feedback, insights.

Nice summation on the measures, and I would add CPI-E or experimental measure for seniors. Perhaps now, however, right before the catfood commission reports and the Peterson gang going all out, is not the time to fix a minor gliche to smooth adjustments. Even CPI-E has adjustment problems, some which are rectified by adjustments in the donut hole of medicare. (Medical care costs appear to be driving the CPI-W up trend.)

How about creating an account and we do a little "cross posts" in at least the comments?

Seems we're hitting different perspectives on these reports so it might help both of our readers to do a little cross linking for a wider view?

Folks reading this, here is some info on CPI-E, from the BLS.

If I can get the raw data, I can create a graph series on CPI-E, but as far as I know, no adjustments, nothing is based on this index?

What's the catfood commission, or what is Peterson Institute doing? Another attack to privatize social security you mean?