Total November retail sales were $448.1 billion.  Below are the retail sales categories monthly percentage changes.  These numbers are seasonally adjusted.   General Merchandise includes Walmart, super centers, Costco and so on.  Department stores by themselves saw no change from last month, not good news for them during the start of Holiday shopping.  Grocery stores by themselves saw a 0.8% monthly sales increase.  Electronics and appliances look better with a 0.6% monthly gain.  Online shopping continues to grow with nonstore retailers increasing 0.6% and a very large 7.3% for the year. 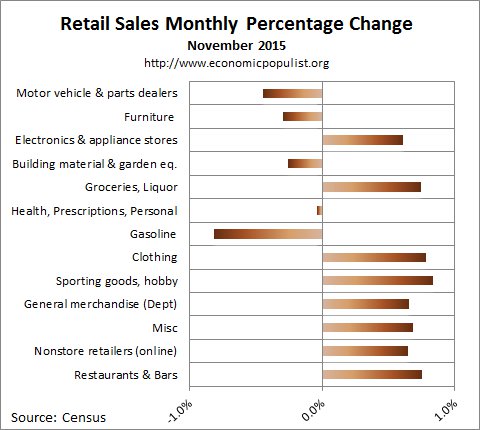 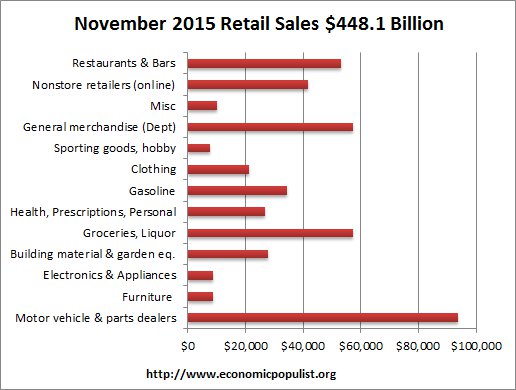 The below pie chart breaks down the monthly seasonally adjusted retail sales by category as a percentage of total sales by dollar amounts.  The size of auto sales in comparison to all else never ceases to amaze., yet if one looks back at past pie charts from this site, we see nonstore retailers taking a larger and larger bite out of the retail sales pie. 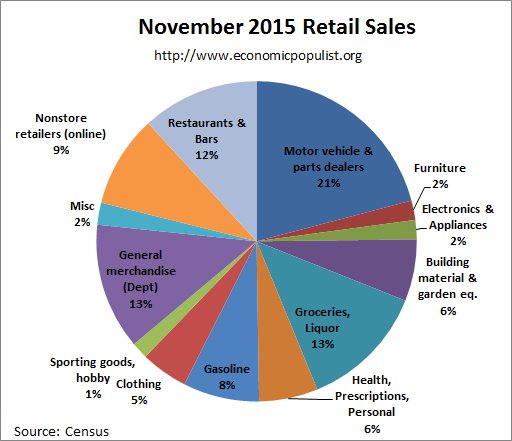 For the three month moving average, from January September to November in comparison to the June through August average, retail sales have increased by 0.3%, which implies some slow molasses sales.  The retail sales three month moving average in comparison to a year ago is up 1.7%.  Overall as shown the below graph of quarterly annualized retail sales percentage change, up to Q3 2015.  Adjusted for prices and inflation is what matters for economic growth.